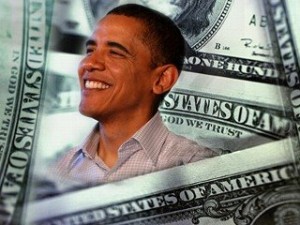 “Everyday that goes by, we learn more about the horrifying scope of this catastrophe – destruction and suffering that defies comprehension.”  The President isn’t talking about the first year of the Obama presidency, but rather the dire situation in distressed Haiti.

While introducing the Clinton/Bush Haiti Relief Fund Obama shared that the fund  is a conduit, “…into the incredible generosity, the ingenuity, [and] the can-do spirit of the American people in helping our neighbors in need. ”

Who better than Obama to discuss and represent American openhandedness and the spirit of giving?

In fact, in response to what Barack Obama described as, “deeply moving,” “heartbreaking images of devastation” the President and First Lady donated a whopping $15,000.00 to the Clinton Bush Haiti Fund. Yes, a figure worth repeating, $15,000.00.   But then again, the Obama’s are not known altruistic benevolence when it comes to sharing the contents of the Obama joint bank account.

In previous comments concerning Haiti, the President implored Americans to give, saying, “Despite the fact that we are experiencing tough times here at home, I would encourage those Americans who want to support the urgent humanitarian efforts to go to whitehouse.gov where you can learn how to contribute.”

Maybe Obama is the one who needs to “learn how to contribute?”  According to CNN Money Barack Obama is worth 1.3 million and donated 1.5% or $15,000.00?  Is this how the President leads the American people to give to a relief effort?

Not to worry, the Obama family Hawaiian vacation fund is never in jeopardy of being depleted by causes like major earthquakes. Actually, according to historical records of charitable giving, a 1% contribution is not out of character for Barry and Michelle.  Just this week, Sam Stein of the Huffington Post outlined the First Couple’s giving record from 2000 through 2004.  During that period, the Obama’s earned about $300-thousand dollars a year, but gave no more than $3,500.00 or 1% of their annual income.

The Obama’s also gave to causes such as the African Muntu Dance Theater and The Rochelle Lee Fund who sponsor Big Read programs in conjunction with the National Endowment for the Arts. Oh, and let’s not forget the $13,107.00 donation to the Congressional Black Caucus listed as a “charity gift.”

The Obama’s tax records indicate that, when it comes to “sharing the wealth” the couple fell short of the “Biblical 10% tithe.” Averaging $225-thousand dollars a year and giving $2,500.00 to charity, which by the way works out to $6.84 cents a day, from a President with zero compunction about picking the pockets of Americans who, no thanks to liberal policies, earn less and give more-is appalling.

As fortune would have it, the esteemed Nobel Peace Prize winner can redeem his tightfisted reputation by exhibiting munificence and bestowing the $1.4 million in Oslo prize money to the Haiti relief fund. Robert Gibbs did say, “The money would be donated to charity.” What could be a better cause to support?

Making a $1.4 million contribution would not only assist the devastated Haitians, but, in the process, such a bighearted gesture could also bolster the wilting President’s global reputation?