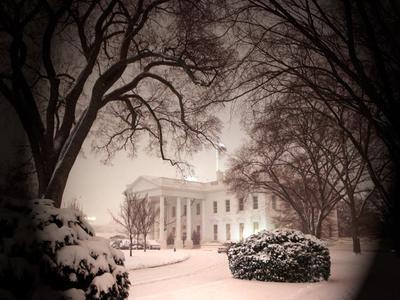 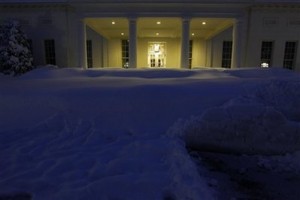 A snow job is defined as in “intensive effort at persuasion or deception.” Thus, it stands to reason that Barack Obama remained undaunted during the biggest blizzard to hit Washington, D.C. since 1922. The historic snowstorm brought down the nation’s capital, culminating a year-long “snow job” administered by “historic” President Barack Obama.

Ironically, Washington, D.C. was the hardest hit, burying a Presidential Executive Mansion under a frosty layer of precipitation so overwhelming the White House has officially been lost in a virtual white-out.

Yet a few feet of snow did not curtail “Wild Man of the Snows” Barack Obama, who ditched the “souped-up Cadillac limousine fondly known as ‘the Beast’ … for a vehicle capable of plowing through 20-plus inches of snow.” On a “Nanook of the North” mission and “not walking away from any challenge” — and enduring two presidential caravan vehicles crashing into each other — a determined Obama inched forward through the storm.

In a prophetic moment filled with economic snow-job symbolism, “[o]n a narrow road between the Treasury Department and the White House, a tree branch, weighed down by the snow, snapped and fell onto a vehicle carrying members of the media.” Luckily, no one was hurt as the motorcade endured what CNN called a “snow-fu.”

Why was a resolute Barack risking life and limb to inch through snowdrifts at fifteen miles per hour? Because the president had an engagement to address the DNC winter meeting and a rare opportunity to contribute a couple of additional inches to the mounting Washington, D.C. flurry. Cool and dry amongst “snow and ice caked” officials, Chicago native, political Metoh-Kangmi Barack Obama joked, “You guys aren’t used to this.”

On an unprecedented snowy day, Barack had appropriately scheduled a rhetorical snowstorm for the Democrats. Water vapor emanating from Obama’s mouth coupled with the frigid winter air transformed every word the president uttered into a “man-caused” snow job.

Keenly aware that Scott Brown had plowed through a Democratic supermajority, Barack planned to exhort a wavering party toward “optimism in the face of Republican strong challenge to their Congressional dominance.” In other words, Obama was there to reinforce an ongoing snow job. The president might as well have encouraged the DNC to follow the bouncing snowflake while singing, “Oh the weather outside is frightful … and since we’ve no place to go, Let it Snow! Let it Snow! Let it Snow!

The snow fell and whipped around the Capital Hilton as Obama made an intensive effort to persuade and deceive by saying, “Everything we’ve done over the past year has been not only to right our economy, to break the back of this recession, but also to restore some of the security middle-class families had felt slipping away for over a decade now.”

Deceptive political snowdrifts lined the walls of the conference center as master snow-jobber Obama attempted to persuade liberal listeners that really, “[n]one of us wanted to throw a lifeline to the banks … it had to happen in order to prevent millions more from losing their jobs, millions of business and homes foreclosed; the real outrage is that we had to do it in the first place in order to fend off the collapse of the financial systems.”

If only Obama’s ice-laden voice could have been drowned out by beeping salt trucks. Instead, snowman extraordinaire Barack Obama forged ahead through 36 inches of man-made snow, saying, “Then we passed almost $300-billion in tax relief, tax cuts for small businesses, tax cuts for 95% of working Americans. We put Americans to work building the infrastructure of tomorrow, doing the work America needs done.” As Obama talked, snow-job-induced buildup required plow and sander assistance.

In lieu of name tags, Vertex® Ergonomic Snow Shovels should have been distributed to meeting participants because SMI® Super Wizzard Snow Gun Barack Obama then went on to claim, “We’ve kept our promises. We’ve kept our commitments. We have moved forward on behalf of a more prosperous and more secure future for the American people.”

David Plouffe may as well have been warming up the Chevy Suburban four-wheel-drive SUV for the ride back to the White House, while Brrrrack assured Democrats that he did not “intend to spend all [his] time taking polls to figure out whether we’re going to seize the future or not. While the presidential motorcade polluted the air outside the hotel, Obama told a rapt audience that “the nation that leads the clean energy revolution will lead the 21st-century global economy.”

Based on Obama’s statements, Americans should keep shovels handy. The forecast predicts the snow job will continue into 2012. Obama pledged to oppose the weather patterns swirling outside the hallowed halls of power. Touching upon health care reform, a president perpetually shod in political snowshoes vowed to move “forward against prevailing winds.”

Retreating from the podium, Obama acknowledged personal responsibility to lead as going up “against a blizzard” of opposition. Humorously coining the weather phenomenon “Snowmageddon,” Obama disappeared into the blinding snow.

Yet while brushing blizzard-of-2010 snow from his shoulders, Obama remains oblivious.  The president is unaware of the outward manifestation of the political blizzard he generates every time opens his mouth, complete with tracks in the snow even the Yeti would be proud of leading straight to the Oval Office.