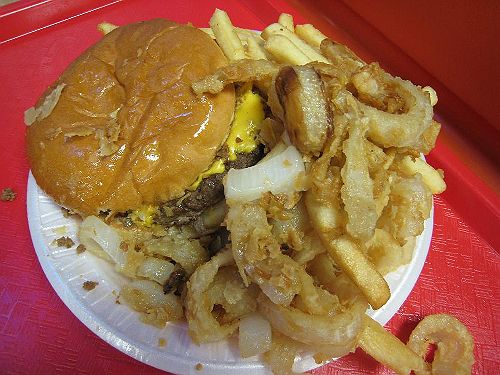 After a routine physical examination President Obama was found to be “in overall excellent health.”Although deemed fit for duty Obama continues to struggle with two avoidable health issues, elevated cholesterol and holding the title of America’s most historic Marlboro Man.

This most recent medical exam indicated Obama’s cholesterol levels have risen since 2007.  Why? The President appears to have a penchant for Chicago “food desert”favorites like cheeseburgers and fries, which likely contributed to Barack’s elevated low-density lipid profile. The President’s, “latest exam found his overall cholesterol was 209, slightly above the normal level of 2007. His level of LDL, the so-called bad cholesterol, was 138 and his doctor recommended that he try to reduce that to 130 through changes in his diet.”

What more opportune time than the present for Barack to volunteer to be poster boy for what happens if America fails to implement lifestyle choices promoting physical health? “Good for you living” spokesperson, First Lady Michelle Obama can refer directly to her husband when warning the nation that “small dietary changes” are futile if self-destructive men continue to smoke and take junkets to local fast food restaurants.

Then again maybe it’s not Barry’s noon time visits to Five Guys that negatively impacted his LDL, but the Wagyu beefsteak indulgence the Obama’s have partaken of for the past year.  If that’s the case, “Let’s Move” representative Michelle Obama can apologetically explain to America she was unaware extensive fat marbling was the reason that the $300.00 a pound steak Barack eats every week appears as if it’s “covered in snow.”

In addition to being a potential candidate for high cholesterol therapy, Obama was also told by chief White House physician Dr. Jeffrey Kuhlman to continue stocking up on the Nicorette gum he has been chewing for over two years.  It seems the “health care reform President”  still seems to be struggling with an ongoing problem with sacrificing Marlboro Reds for the “common good.”

As an aside, I wonder if Michelle finds Barry’s cigarette butts in the White House vegetable garden?

Either way, revelations about Obama’s health would be rectified if as a husband,Obama embraced the healthy eating and non-smoking suggestions his wife firmly encourages the rest of America adopt.

In an article entitled, “Study: Men Hard-Wired to Ignore their Wives,” Tanya Chartrand, a professor of marketing and psychology at Duke said, “People with a tendency toward reactance may nonconsciously and quite unintentionally act in a counterproductive manner simply because they are trying to resist someone else’s encroachment on their freedom.”

Cigarette smoking, burger eating  Barack Obama proves even presidents don’t take kindly to being controlled.  Which begs the question – Why is healthy lifestyle rebel Barack Obama attempting to control the rest of us?