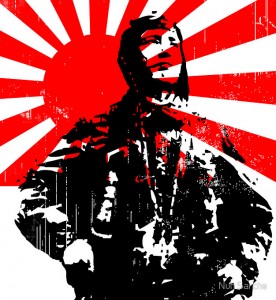 “I am not going on this mission for the Emperor or for the Empire…I am going because I was ordered to.” These words were spoken by one of Japan’s first kamikaze pilots, Lieutenant Yukio Seki, after being compelled to volunteer for a suicide mission.  Though apprehensive, the pilot maintained the insight to comprehend, “Japan’s future was pale if it was forced to kill one of its best pilots.”

So it is in Washington DC as a “divine wind” blows through the nation’s capital. Although in the majority, Democrats are experiencing decreased capacity to successfully wage political war.  Disregarding plummeting polls and lost elections, which comprise a formidable opposing armada amassing on the horizon; Barack Obama remains resolute in his reluctance to surrender.

During WWII Takijiro Onishi, Vice-Admiral of the Japanese Navy faced down a huge invasion in the Philippines.  Anticipating crushing defeat, Onishi requested suicide Thunder God Corps be utilized as a surefire tactic to assure Japanese bombs made contact with American warships.  Human being guided, bomb-laden aircraft on a volatile suicide collision with enemy targets, is a tactic bomb thrower Obama may employ if he passes health care reform by detonating the “nuclear option” of reconciliation.

Presently, when it comes to health care reform, the future of the Democrat Party is as pale as Japan’s ability to prevail with 100 operational aircraft confronted by an American flotilla. In response, Obama has decided to implement a similar last-ditch effort in an attempt to “snatch victory from the jaws of defeat.” Under the command of Vice-Admiral Obama, and in an attempt to avoid a rout, Democrats are being coercively recruited to take part in assault death units.  What’s the mission?  Prevail in the President’s policy war—even if it costs political lives.

For a year now, winning the health care reform battle has been a difficult hit-or-miss undertaking for Obama.  Blue Dog Democrats and conservative Representatives in the House and Senate, aware constituents are opposed to the cost and control aspects of the sweeping health care reform bill, resist supporting Obama’s legislation.   Thus the war drags on and on as Democrats portend the scope of defeat.  As a result, Obama Onishi has requested Democrats transform themselves into health care reform “smart bombs,” sacrificing all for the cause.

“Senator Lamar Alexandar (R-Tenn) said that if Democrats push health care through under the majority only process known as reconciliation, it will be a ‘political kamikaze mission’.”  Obviously the senator uses the word “kamikaze” in a “hyperbolic or metaphorical fashion to refer to non-fatal actions which result in significant loss for the attacker, such as injury or the end of a career”—and career ending it will be!

Yet Obama considers the goal of reforming health care critical enough to warrant the sacrifice of seats in November and apparently even the Oval Office in 2012. Encouraging a pervasive self-slaughter mentality, daily Obama reminds indecisive liberals, “[t]o maintain a strong presidency, we need to pass the bill.”

President Obama pushed wavering House members to OK health-care legislation for his own political standing and for theirs, as the battle came down to a bare-knuckle brawl for votes. Obama met with groups of liberal and more conservative Democrats in the White House to try to assemble a winning coalition.

Well aware first-term presidents typically suffer party losses; the President continues to pressure Democrat troops on a mission of self-destruction saying, “I don’t want you to feel discouraged. I want you to understand that we’ve got to push that much harder.”  And so, Thunder Gods in the House and Senate strap themselves to a poorly constructed bill resembling a rickety, wood kamikaze plane, built solely to crash and burn.

Obama demands Democrats disregard generic ballot poll predictions and constituent sentiment and willingly sacrifice political life and limb for what is deemed honorable partisan death.  The result–Democrats are presently being subjected to “brutal training” similar to that of a WWII kamikaze pilot, whose preparation for death was “justified by the idea that it would instill a soldiers fighting spirit.”

Volunteering to “fall on the sword,” a nonverbal proclamation has been issued by Democrats similar to that of 24th kamikaze pilot, Commander Seki who said, “It is better to die, rather than to live as a coward.” Why is the party of Pelosi and Reid responding in such a dramatic way?  Because in an attempt to rouse pusillanimous politicians to make the ultimate sacrifice, reverberating through the hallowed halls of power the virtuous voice of the Speaker of the House can be heard.

Nancy Pelosi, whose seat is not in jeopardy, is of the opinion “[i] t will take courage to pass health care.” Pelosi posed and answered her own question saying, “But why are we here? We’re not here just to self-perpetuate our service in Congress…Time is up, we really have to go forth.”

Emperor Barack contributes further inspiration to Democrats reluctantly adjusting rising sun hachimaki’s on clammy foreheads.  Obama claims to, “[k]now some … might feel discouraged because changing the ways of Washington is hard. It’s harder than a lot of [Democrats] thought it might be. Sometimes [Democrats] feel… that it’s not possible. You might want to give up.” Obama pleaded please, “Don’t give up.”

It is not surprising discord prevails within Democrat ranks. Japan’s special suicide program was a divisive matter within Japanese military circles as well. Veteran field commanders considered the notion of one-way death missions a colossal waste of valuable lives. Nevertheless, many naysayers were eventually convinced because the kamikaze “sure-hitting attack crafts,” delivered “virtually all late war losses.” In like manner, as die hard Blue Dog ideologues refuse to self-destruct over issues like abortion language, it is probably only a matter of time before Bart Stupak (D-Mich) is persuaded to relinquish opposition and shout “banzai,” on behalf of the Democrat Party.

WWII winded down with the Japanese steadfastly believing “because they were fighting for their Emperor God, the Kamikaze would bring them deliverance at the darkest hour.” Twenty-five hundred dead human torpedoes and a lost war later, the faithful were the misguided ones.

Pausing for a moment from memorizing the inspiring health care bill and slamming back socialist warm sake while shouting “Hissatsu” for the cause—it would serve Democrats well to reacquaint with history.  “On the eve of the Japanese surrender, Takijiro Onishi ended his own life, leaving a note of apology to his dead pilots – their sacrifice had been in vain.”As Election Day draws near, the suicidal harakiri that Obamacare demands from the Democrat Party will likewise be proven futile, because in the end—it’s the American people who will eventually win this war.