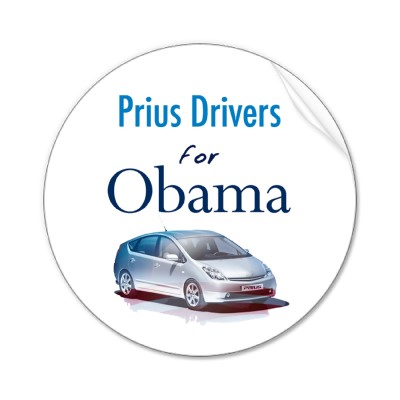 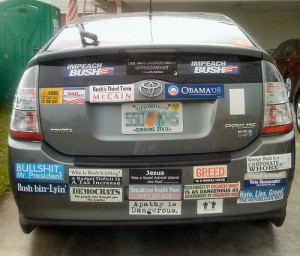 Prius owners have a unique opportunity to drive a gas efficient car while making a statement on behalf of environmental consciousness. Prius drivers tend toward the type of people who likely drink organic apple juice, wear Birkenstocks and come to the grocery store with cloth satchels coldly staring down shoppers grabbing extra plastic bags.

Driving a Prius is like being an itinerant preacher with a Bible, sending a message without a word.  A Prius is a sermon on wheels, a verbal lashing on the open highway. Prius drivers love the environment, are conscious of all things natural, eat quinoa and as an added bonus, at 50 miles to the gallon, have more money to send to Moveon.org.

One particular Prius owner in my life is a liberal who spends very little on gas because most of the time his small green car is on the side of the road on the Brooklyn-Queens Expressway, or in the shop being repaired.  I tease my friend asking, “Why don’t you do a Fred Flintstone, cut a hole in the floor and buy a good pair of sneakers? You’ll get farther.”  And that was before self-determining Toyota Priuses began deciding the speed and direction vehicles would be taking, with or without a driver behind the wheel.

What a bummer. Prius title-holders were self-righteously tooling along, listening to the Grateful Dead, staring down gas guzzling drivers who smoke and eat McDonalds, while listening to Heavy Metal when what happens?  The Prius starts freakin’ out like a hybrid on a bad LSD trip.

On Monday it happened again, but this time with a heroic outcome.  James Sikes was driving a second-generation Prius on an eastern San Diego County freeway when, after nudging the accelerator to make a pass, the car took off despite his jamming the brake pedal the vehicle reached 94 miles per hour at one point.

It makes one wonder whether a beanie with a wind driven propeller sticking out of a sunroof could power cars without an accelerator pedal?

Leftie tree huggers should pause from taking the earth’s temperature long enough to take note of a disturbing pattern.  The Toyota Prius was sold to America in the same way health care reform is presently being peddled by Barack Obama, who of late, with open collar and rolled up sleeves, could easily be mistaken for a car salesman. Prius health care is being promoted for efficiency, savings, economy and choice.  Once behind the wheel, the Obama medical mobile is poised to smash America directly into stonewalls, like Anthony Maracchini driving a Prius in upstate New York, “after a stuck accelerator pedal ‘shot’ the vehicle forward.”

Before the gas pedal gets stuck on a faulty floor mat and America is totaled in a wreck, car salesman Barack Obama should just be left holding the promotional helium balloons standing alone in the middle of the lot.

Why? Because it’s only a matter of time before the assurance of lower emissions, gas efficiency and low cost translate into lives being threatened by a substandard product.  Like Toyota Prius, the shoddy health care policy liberals are peddling includes all kinds of promises, but after gathering speed, in the end, could be responsible for killing us all.