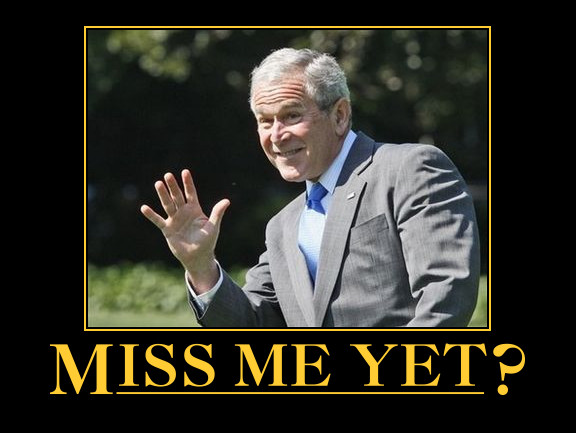 It never fails, whenever I make an unsolicited proclamation people look at me like I have three heads, call me a moon bat, snicker and say things like, “Yeah right, uh huh, whatever.”

Take for instance when Obama won the election the liberals at work giddily drooled so much I was forced to wear hip boots to work.  Atheists were acting like Obama was the second coming.  On inauguration day, even irreverent clerical workers stood around clasping prayerful hands to their chests like Obama was a beatified saint.

Thick with adoration the atmosphere cried out for someone to inject a smarmy unwanted comment into the mix and that someone was none other than, me.  Blocking Obama from view as he waved to the proletariat on live streaming video, I said, “In one year, things are going to be so bad, you loony libs are going to be praying to have George W. Bush back in office.  Trust me, even the Iraq War is going to look like Disney Land compared to what Obama has in store for this country.”

My comment was met with a cascade of paper clips coupled with a chorus of “Yeah, yeah…you’re just jealous because you lost.”  To which I quickly retorted, “I didn’t lose, America lost.  You’ll see.”

I was so sure of myself that while coworkers where showering each other with hope and change confetti and huddled together in a group hug, I got a yellow post it and wrote, “When America wakes up from its stupor they’ll miss George Bush!”

I tacked the post-it to my bulletin board, pointed to it and said, “Mark my words.”

Although curled on the edges, the post-it hangs in plain sight.  In fact, that perfect yellow square came in handy a few weeks ago when billboards started showing up with a picture of Bush asking the timely question, “Miss me yet?”

I removed the post-it, walked into the midst of an impromptu meeting, waved the prophetic piece of paper around, cleared my throat loudly and with great emphasis said, “I told you.” My remark was met with, “Oh you again? Why don’t you go back in your office and draw hearts on your Ronald Reagan poster?”

Yet the mood had changed. This time the response was somewhat half-hearted, anemic, unconvinced. The pugnacious attitude was gone. In fact one Bush hater actually had a look of reverie on his face as if he was harkening back in his memory to the days when Iran getting the bomb wasn’t as much of an issue as Bush mispronouncing nuclear, “nucular.”

I tacked the paper back on the bulletin board because, I knew the “Bring Back George W. Movement” was just getting under way and I’d be able to drag out that post-it innumerable times before my naysayers would submit and cry “Uncle George”

Recently McClatchy ran a story entitled, Is George W. Bush about to start a political comeback? The article said, “Written off as one of the worst presidents in U.S. history when he left office… Now, some events might be turning in Bush’s favor just as he and his family emerge to tell their side of the story.”

Bush haters are known to grumble under their breath things like, “The man is dumb,” and “there were no weapons of mass destruction.” Bush haters are also famous for swinging their arms around and splashing coffee every where while mumbling, “Halliburton, Cheney’s in charge, its about the oil, cowboy and…to vindicate his father.”

Now it appears that the Iraq war “may not turn out to be the political albatross it was while [Bush] was in office” and just like G.W. predicted, “democracy does appear to be taking hold.”

Even Biden seems to be getting all schmaltzy about Bush?  In fact, the Vice President, when not dropping the F-bomb on open mike, has admitted even he’s, “very optimistic about Iraq.” Strongly opposed to the war and the surge when Bush was in office, Biden said recently, “You’re going to see a stable government in Iraq that is actually moving toward a representative government.”  Don’t be surprised to see Joe riding the train sporting a grin and a “Miss Me Yet” t-shirt.

More and more of those billboards will be showing up when followers of Obama lose their health insurance and find themselves sitting in clinics waiting for substandard medical care at increased cost. If god forbid more American soldiers are killed in Afghanistan and cap and trade is instituted, or if a VAT tax jacks up prices across the board and when Americans finally realize in 2012 Obama’s gross federal debt with be $16.3 trillion, which is almost double Bush’s ($9.9 trillion) deficit in his last year of office — that will be a day to drag out the post-it, for sure.

But the pièce de résistance will be the first payday after the Bush tax cuts expire and the Obama tax increases kick in to cover the $2-trillion dollar health care deform bill.

The routine will be standard; the Bush-hating, Obama loving secretary will shuffle down to payroll and come back to the office with the checks.  It will get eerily quiet and then the silence will be broken by a long, guttural scream. On that day the geniuses who read me the riot act about how middle class taxes wouldn’t increase and attested to the fact that, unlike Bush, Barry really cares about “the people,” they will be unable to deny the scribble on my post-it is legit.

That will be the moment my smart aleck, New York truth telling will be publicly vindicated—even those who swore they never would, will be longing for the good old days of “misunderestimated” G.W.

My only prayer is to be proven wrong about one triple shot truth I also felt compelled to share. At a staff meeting, I nonchalantly blurted out “American elections have seen their better days.”  Choking down a powdered sugar jelly stick I followed up by saying, “This Obama guy is just hankering to declare Martial Law”– after which three upper level administrators simultaneously spit mouthfuls of coffee all over the conference table, ruining my freshly opened, about to be used post-it pad.