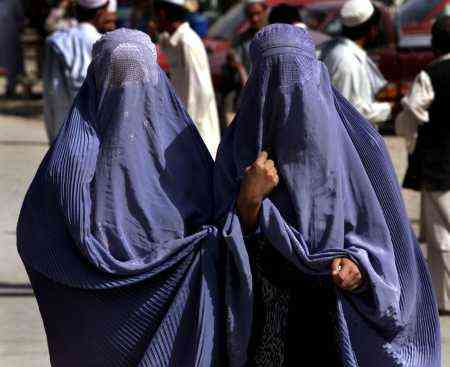 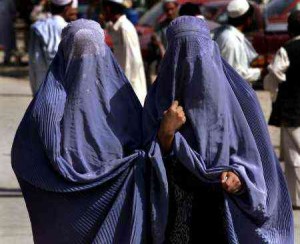 In the spirit of being more open and accepting to cultural diversity, one day I purposely chose to study a woman endeavoring to read the ingredients on the side panel of laundry soap in Walmart.  The unique thing about the whole event was the woman was dressed in full burqua sporting a trendy pair of Ray Ban sunglasses.  Needless to say, the experience was difficult for the both her and me.

That eye-opener was not only matched, but topped by another Muslim woman, also in full burqua, attempting to drink an iced Starbucks caramel macchiato.  That poor dear struggled for quite a while trying to figure out how and where to snake the straw. Suffice it to say the whole scenario was similar to witnessing a car wreck –it was impossible not to stare.

So you can imagine my glee when it was reported that the northern city of Novara, Italy, fined a woman for wearing a burqua.  Apparently, “City police ticketed [the woman who] will have to pay a 500-euro ($650-dollar) fine,” for the crime of appearing fully veiled on an Italian street.

The town of Novara is located in the Piedmont region, which is apparently a “stronghold of the anti-immigration Northern League, a key party in Prime Minister Silvio Berlusconi’s conservative government.”

Although “Covering one’s face — with a veil or a motorcycle helmet — in public has been banned … since 1975,” fining a woman for being out and about in a burqua is a “first [for] Italy.” Regardless, one has to believe that under all those yards of black material the woman must have been secretly thrilled!   Six-hundred and fifty dollars is a small price to pay for freedom.

Novara “City hall adopted a decree in late January banning the burqua in public places and their vicinity.” Apparently, the woman and her husband were unwilling to comply because the Tunisian national was apprehended, not in an espresso cafe or even an Italian version of Wal-mart, but under the ever watchful eye of a looming husband at the local post office.  Forbidden to speak on own behalf, the husband, “refused to have her identified by male officers,” so a female patrol officer, sans burqua, was promptly called in.

Banning the burqua is not new to Europe.  In France a proposal to prohibit “voile integrale” – which means “total veil,” is presently being introduced by lawmakers.  If adopted, appearing in full covering, in “public places like hospitals and schools, and on public transport,” would be forbidden.  In other words, showing up on the street and even shopping for laundry soap fully veiled would be permissible.  However, trying to board a bus would be illegal.

The bad news for Muslim husbands living in Sarkozy’s France is the French may have plans to “jail and impose huge fines on anyone who forces a Muslim woman to wear a full-face veil.”  According to a pro government newspaper, “The law will create a new offence of incitement to cover the face for reasons of gender.”

So there is hope for America as our country is presently in the process of adopting all things European.  In the meantime, this summer, when fully covered women show up at the beach, I’ll do everything in my earthly power to be respectful and avoid staring.  However, if Muslim women should decide to throw caution to the wind and swim in a burqua, I request to no longer be held to my original promise.