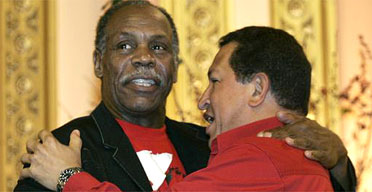 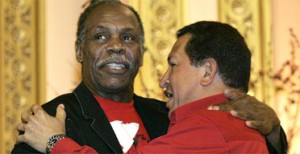 Following presidential example, Danny Glover decided to express sentiment toward America not in words but by failing to place his hand over his heart during the color guard presentation of the American flag at Utah State University’s commencement ceremony.

Keynote speaker and ardent supporter of socialist regimes, Danny Glover, “told The Salt Lake Tribune after the ceremony that he doesn’t typically cover his heart during flag ceremonies and he meant no disrespect.” Heck if President Obama doesn’t adhere to the United States flag code and is exempt from putting his  hand over his heart during the pledge, why would a Hollywood actor be held to a different standard?

Glover, defended his action claiming, “I was listening to the national anthem and paying attention. I probably wasn’t the only one in there who didn’t put a hand over their heart.”  Glover can say that again!

Apparently graduates and those in attendance largely approved of Glover’s irreverence toward the flag and National Anthem, “intermittent booing throughout the graduation was largely overpowered by clapping and cheering.”

Glover was unbowed by patriotic student criticism, which was deemed “stupid,” “rude” and “disrespectful” by Lethal Weapon fans in attendance.  Largely, many students considered Glover’s behavior neither, stupid, rude or disrespectful.  In fact, Danny Glover was  “rewarded with a standing ovation by the majority of the large crowd,” similar to the type of lauding, Barack Obama often receives when showing contempt toward the nation he leads.

Glover said this isn’t the first time, “I’ve been booed before. People have problems sometimes with what I believe and who I talk to.” Danny Glover said, “I try to respect people, honor them.”  For Danny, when it comes to insolence and detestable behavior, the actor restricts obnoxia to the American flag and the country that brought him immeasurable wealth and success.

“It was the crowd surrounding [Glover’s] critics that finally quieted the disruptive yelling.” Morgan Jackson, “who came to watch her cousin Sidney Allen graduate,” said “the constant booing a few rows behind her was ‘irritating’.”  Excuse me, Morgan; were Danny Glover’s manners inspiring and refreshing?

Jackson said, “You would think you could let this be about the people who were graduating today.” Morgan opined the hecklers “probably didn’t know anyone graduating and only came to cause a scene.”  Not that Danny was causing a scene or sending a subliminal message.

A black USC football player said “it meant a lot, after being a minority on the Logan campus for four years, to have Glover accept an honorary doctorate. The celebrity’s speech, which highlighted many advances for minorities in the past 63 years since Glover’s birth, was inspirational.”  Apparently on the left African American advancement includes pardon for unpatriotic, impious conduct.

Glover, close friend of Venezuelan environmental President Hugo Chavez, inspired graduates by sharing the opinion that “global warming is real and that climate change is a human-rights issue, as well as an environmental issue,” bringing many to their feet in agreement.

UNICEF good-will ambassador, Glover also “talked about the dangers of Arizona’s proposed immigration Senate Bill 1070 and about his efforts to fight work-force discrimination and poverty in places such as Haiti,” but failed to mention UNICEF’s support for groups advocating worldwide slaughter of the unborn.

Beckoning New Age power honorary doctorate Danny Glover told graduates at an institute of higher learning, “Maybe with all our force, all our conviction, all our humility, all our understanding, we can make something get done.”

And hopefully accomplish that end without placing our hand over our heart or exhibiting respect for the nation offering all of us every opportunity for success?