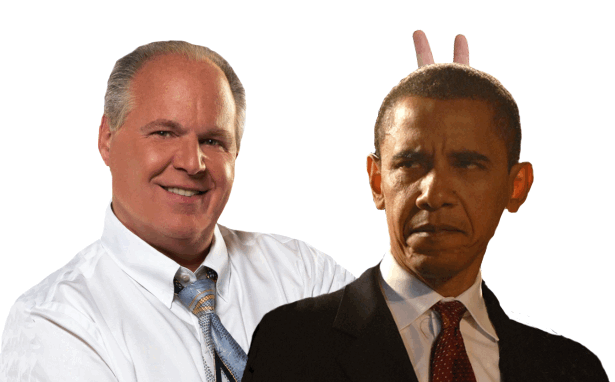 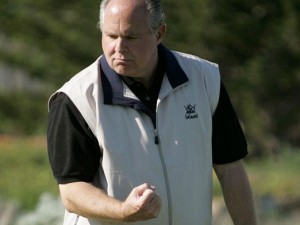 In an excerpt from Zev Chafets’s forthcoming book, “Rush Limbaugh: An Army of One” the President apparently declined to play a round of golf with Rush and instead a top Democrat advisor suggested the radio talk show king golf alone by saying, “Limbaugh can play with himself.

Chafets “wouldn’t name the aide or say whether the quote [came] directly from Obama.” Zev neither confirmed nor denied the source. However, renowned for the middle finger face scratch, it’s not above President Obama to send a message with a deeper meaning, especially when given the opportunity to zing an arch nemesis like El Rushbo.

If the proposition did come from the President, it wouldn’t be the first time Barry expressed a smarmy double entendre. Jonathan Alter of Newsweek’s  forthcoming book,  “The Promise: President Obama, Year One ” claims, according to The Washington Post, Barack indulged in degrading sexual innuendo against detractors by saying “Republican opposition to the stimulus ‘helped create the tea-baggers and empowered that whole wing of the Republican Party where it now controls the agenda for the Republicans’.”

Obama has yet to detract the “tea bagger” remark or specify where the Rush can “play with himself” comment came from.

According to Chafets, the golf scenario unfolded when Zev reportedly encouraged Limbaugh to reach out to the president saying, “You guys are both golfers.”  Chafets asked Rush, “Would you play a round with the president and show the country that there are no hard feelings?”

The always patriotic and polite Limbaugh told Chafets, “He’s the president of the United States.  If any president asked me to meet him, or play golf with him, I’d do it. But I promise you that will never happen. His base on the left would have a s–t-fit.”

“How about letting me ask?” Chafets said. “Go ahead,” Limbaugh said. “Nothing will come of it.”  Supposedly Chafets reached out to David Axelrod, whom Zev claims to “know slightly,” but Axelrod ignored Chafets’s calls. Then Chafets spoke to “a very senior Democratic activist” who evidently conveyed the message to Obama.

A day or two later the adviser conveyed a response steeped in innuendo, “Limbaugh can play with himself.”

As usual, a “mark my words on it” Limbaugh was spot on, which is why Rush will be golfing alone.