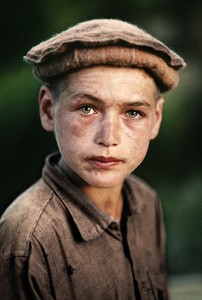 “What are little boys made of? Snips and snails, and puppy dogs tails.”  That 19th century nursery rhyme fills the reader with visions of dirty faces, backwards baseball caps, toothless grins and pockets loaded down with snips, snails and tails. The poem encapsulates the immense source of pleasure a little boy can bring to the world just by being a boy.

Fresh out of first grade, seven-year-olds can tell time, are beginning to read, can perform a respectable somersault and are more aware of the world around them.  In America, boys are fitted with helmets before learning to ride a two-wheeler, love to go to the batting range to practice hitting sliders and are expert at playing Animal Crossing on Nintendo DS.

Seven-year-old boys may act tough, but are known to fret and can be fearful especially at night. According to child development experts, boys of seven are “often afraid of the dark [and] a flashlight by the bed is a great comfort.” Around that age, little boys “like to be tucked in,” read a story and still “take a favorite toy to bed.”

With that in mind, one can only imagine the terror a small boy experienced after being “abducted from the village of Heratiyan” in the Sarwan Qala area of Afghanistan. Coddled in a womb of safety, American children couldn’t even fathom the frenzied horror of being held against their will and then publicly executed at the hands of Taliban soldiers.

A favorite toy for boys in the seven-year-old age group is the Ultimate Spy Watch.  Youngsters can pretend to “keep intruders and other spies in the dark about missions and secrets, while decoding messages and keeping a careful watch on enemies.”  Tragically, the little boy kidnapped from a remote village by Taliban militants wasn’t wearing a spy watch or playing pretend when accused of being a mole, tried by a mock tribunal and “found guilty of working for the government.”

Probably still sweaty from playing tag on a dusty Afghan playground the tyke, unsure of what was wrong, was dragged kicking and screaming to a neighboring village to stand trial for the crime of colluding with President Hamid Karzai’s government.

The biggest worry American boys struggle with is the decision over what color fluorescent lacrosse socks to wear and whether or not to get a buzz cut for the summer.  The level of fear gripping the heart and mind of any person being held captive by Taliban soldiers, let alone seven-year-old child, is hard to envision and even more excruciating to comprehend.

Confused and terrified did the child weep hysterically for his mother?  Pushed forward by the butt of a gun, where was he held?  How long did the frail frame of a child quiver in fright before the trial took place?

Was the boy beaten, kicked and abused by turbaned Taliban soldiers cursing in Pashto through yards of black fabric? Face swollen and muddied from dirt and tears, did the child drift and doze curled up in the corner of a mud-walled room, on a grimy floor littered with empty shell casings?

In America seven-year-olds spooked by the dark can depend on Moon in My Room to ease boyish fears.  In Afghanistan, the first grader likely spent the night twitching and sobbing.  In the morning, roused from fitful slumber, tousled hair and rubbing eyes swollen shut the drowsy child was probably shoved roughly toward a sun-drenched, open-air court jammed with chanting terrorists adorned in bullet belts and armed with AK-47 assault rifles.

How did it feel for a kid, whose only cheers should be those heard from the side lines of a sporting event, to see an angry crowd screaming in support of garroting him from the branch of a tree?  What words filled his little ears, as he was condemned to die?  Did the boy even understand what was happening or was he searching desperately for the face of his parents in the mob?

Reports said, “The child was publicly hanged in the Taliban stronghold of Helmand province.”  Did soldiers put the cord around his slender neck and drag him to his death? Did they blindfold him or torture him with the noose before choking off his young life?

A typical seven-year-old boy is about sixty pounds; before strangling him to death did Taliban soldiers consider his weight?  Were skinny, underdeveloped legs that should be kicking a soccer ball around a field allowed to thrash uncontrollably until the last breath of life was gone from his tiny body?

This nameless child was not the first to be hung for spying for government and NATO-led troops in Afghanistan and rest assured the little lad won’t be the last. Taliban insurgents have “vowed to intensify activities this year.”

While carefree boys climbed trees and skinned knees all over the United State of America, thousands of miles away in Afghanistan Taliban insurgents fulfilled a solemn pledge by, “hanging up the [lifeless] body of the child on a tree.”

Boys can be boys everywhere except Sarwan Qala where, prior to committing crimes against humanity militants dutifully empty any remnant of snips and snails from the pockets of all seven-year-old boys slated to be put to death by the Taliban.