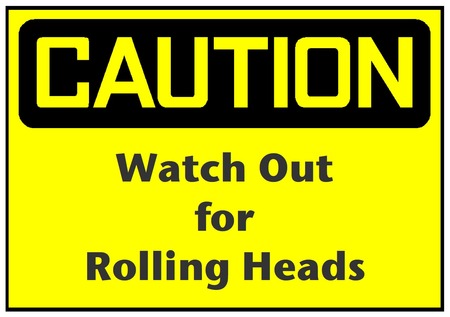 Imagine the surprise of a Southwest Airline employee in Little Rock, Arkansas, when a package destined to be transported to Medtronic, a medical research company, was discovered filled with 40-60 human heads.

One wonders whether bubble wrap or packing peanuts were used to avoid damage.

According to Southwest Airlines, the parcel of human heads wasn’t “labeled or packaged properly.”  Airline officials “called the local authorities” to ascertain if dozens of decapitated heads were “properly obtained.”

The “packaged improperly” part of this scenario is really creepy.  What were sixty heads doing tossed into a heavy-duty, double-walled corrugated box?  Obviously, based on the crudely addressed label, it was relatively easy to see the body parts were headed toward Minnesota.  The more pressing question that arises is: Where did the box o’ heads come from?

After making the discovery, Little Rock police rolled the heads on over to the “county coroner, who questions where they came from and if they were properly obtained.”

“We’ve come to the conclusion that there is a black market out there for human body parts for research or for whatever reason,” said coroner Garland Camper. ”We just want to make sure these specimens here aren’t a part of that black market and underground trade.”

Did Mr. Camper actually say, “Or for whatever reason?”

One hint would be if all the heads were all of Asian descent.  Another would be if the shipment came from a Middle Eastern “head shop” supplier where no order is too big to handle and all heads are valued.

Medtronic spokesman Brian Henry said it is “common to ship body parts for medical education and research,” but that “it is rare for a shipment to be seized.” Henry also added, “We expect our suppliers to follow proper procedures.”

Does the Medtronic supply standard also pertain to obtaining heads for shipment? Or does adherence to “proper procedure” relate only to transporting heads to the Minnesota facility for technological research?

According to Brian Henry, Medtronic’s head supplier of heads is JLS Consulting of Wynne, Arkansas.  Charlie Daniels, Arkansas Secretary of State, not the guy with the cowboy hat who plays “one mean fiddle,” has the license status of JLS Consulting of Wynne, Arkansas listed as “revoked.”  JLS, shipper of heads, is listed as an “LLC Member [whose] information is now confidential per Act 865 of 2007.”

Act 865 has something to do with tax liability issues, which raises additional questions.  How long were those heads rolling around Arkansas before being discovered and, if a company doesn’t pay taxes, would it also be willing to get heads-for-money from nefarious sources?

JLS Consulting founder Janice Hepler has avoided telephone calls ever since the controversy unfolded.   In an earlier interview with a local Arkansas newspaper, Ms. Unhelpful “blamed the problem on the private courier she hired to transport the body parts.” “Nothing is wrong,” the newspaper quoted Hepler as saying. “We’re providing the documentation.”

One small problem: Garland Camper said the paperwork has “discrepancies.”  Maybe the coroner is misinterpreting documentation written in Chinese or even Arabic to be a discrepancy.  If, in fact, the macabre carton comes from either one of those two areas of the globe, documentation on a box full of heads is probably in perfect order.