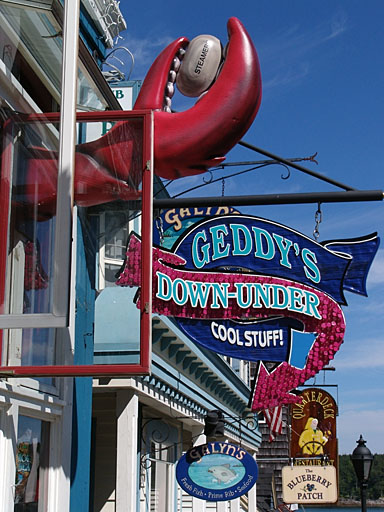 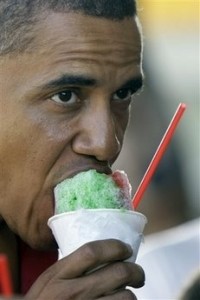 The First Family plans to spend a weekend vacationing on Mount Desert Island, Maine.  This two-day vacation is likely a pre-vacation to the summer vacation, which traditionally takes place in August.

Last year the First Family visited Grand Canyon National Park in Arizona. This year, instead of visiting for a pre-vacation-vacation, the administration decided to sue the state.

During the summer, Barack Obama tends to gravitate north to places like Martha’s Vineyard.  Thus, the very blue state of Maine with its breathtaking views and sumptuous fare await America’s President and First Lady, complete with an epicurean Xanadu of lush environs.

As a precursor to fine dining, Barry and Shelley always manage to visit a down-home, folksy BBQ joint.  Based on the number of smokehouses the Obamas visited in the last year, vacation spots seem to be chosen based solely on access to BBQ. Thus, Mainely Meat BBQ can look forward to a visit from a hungry presidential brood in search of smoked meat.

The official Obama family itinerary has not been made public, but if I were a betting woman, I’d choose either the tony, Michelle-worthy Asticou Inn or the Bar Harbor Inn.

Since eating is always central to Obama junkets, Mount Desert Island has cuisine to satisfy even the most discriminating palate.  I’d venture a guess that the Obama entourage visits The Rose Garden Restaurant.

Thanks to Obama’s economic policies, America gags down boxed macaroni and cheese and stale bologna sandwiches while the furlough-President indulges in bistros that tout “a la carte and prix-fixe menus [that] aren’t cheap.” The Rose Garden menu includes all-American favorites like “strudel filled with asparagus and Gruyère, peppery venison with squash puree,” topped off by desserts like “mascarpone cheesecake.”

For regional fare, which all of America knows the elegant and always health-conscious First Lady simply adores, there is the Burning Tree, whose claim to fame is “some of the best and freshest dinners on the island. Much of the produce and herbs come from its own gardens, with the rest of the ingredients supplied locally whenever possible.”

Garden herbs and locally grown ingredients.  Why, that sounds like the White House Victory Garden.

If he so chooses, the Barry-motorcade can safely escort the girls to The Quiet Side Café and Ice Cream Shop, an excursion that would be harrowing in Arizona for individuals just trying to take a kid for an ice cream cone.

The weekend holds promise for the President to continue to “horse around” on carriage paths in Acadia National Park. “Thar she blows,” whale watching awaits Michelle in the Gulf of Maine. Ben and Bill’s Chocolate Emporium have sweets for “Sweet somethings” Sasha and Malia, and for Grandma Robinson, there is always the “windows into heaven” tour of Tiffany stained-glass windows at St. Saviour’s Episcopal Church.

A good time will likely be had by all.

With such a jammed schedule, it may be hard for Obama to fit in a condolence call to the family of Maine resident Sgt. Brandon Silk, just killed in Afghanistan, let alone take out for one of those yummy ice cream cones the three children of late Staff Sergeant Eric Shaw of Augusta, Maine who, while on his third tour of duty, was cut down at age 31 by enemy fire.

Instead of putting a depressing damper on the weekend, America’s “Dirigo” should just omit visiting families of dead Maine soldiers and instead end the respite optimistically with 18 holes at Kebo Golf Club before heading back to DC to pack for next month’s vacation.