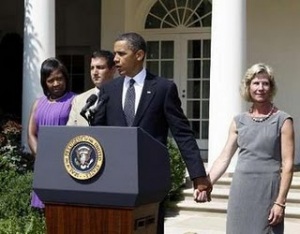 Last week the biggest media hog in the history of the American presidency appeared on ABC’s  “The View.” Sitting cross-legged on the couch squeezed securely between Barbara Walters and Joy Behar, the President pinned the blame for the racially explosive Shirley Sherrod incident on a media culture that Obama claims “doesn’t always get the facts right.”

Obama would know.  Based on some of Barack’s fact-filled comments, the President is certainly a stickler for specifics.  Take for instance Obama efficiently keeping track of the nation’s “57 states.” Particulars like state counting prove Barack is a quintessential authority on specifics.

Why just this week, the Obama administration stringently vetted three unfortunates and strutted out-of-work poster children into the Rose Garden to share tales of unemployment woe.  The only problem was one jobless woman in the tragic trio, the one Obama held hands with, was a convicted felon.

President Barack Obama posed with a Charlottesville resident at a White House event … Court records show she’s been found guilty of two crimes and now the White House says she wouldn’t have been invited if officials had known about her past.

In an attempt to manipulate America, Obama employed the felonious Leslie Macko as an example of someone deserving extended unemployment benefits. As a result, the President who accused the media of failing to vet the facts came to the podium unaware he was clasping the hand of a criminal offender.

Obama said, “We need to extend unemployment compensation benefits for women like Leslie Macko, who lost her job at a fitness center last year, and has been looking for work ever since. Because she’s eligible for only a few more weeks of unemployment, she’s doing what she never thought she’d have to do…She’s turning to her father for financial support.”

Leslie Macko was convicted of prescription fraud and grand larceny, a minor detail that makes Obama’s comments somewhat true.  The woman has been known in the past to “turn elsewhere” for financial support.

If only Obama been aware beforehand, Leslie would have presented the President the perfect argument for the extension of unemployment benefits for six more months.  Obama could have appealed to the public by showing how failure to submit to liberal policies can lead an innocent woman into a life of crime.

Right around the time Barack was schmoozing the ladies of “The View,” Robert Gibbs was busy dodging the press.  Gibbs claimed he didn’t “know the specifics” about why Leslie Macko was in the Rose Garden with Obama.

A convicted felon held hands with the President of the United States and the White House Press Secretary, when asked about the security breach, responded with “I don’t know the specifics?”

Gibbs then said, “But it’s safe to say, had we known [about the charges against her] she wouldn’t have been here.”  In other words, Obama and his crack team, like the media the President censured for careless fact checking failed themselves in “getting the facts right?”