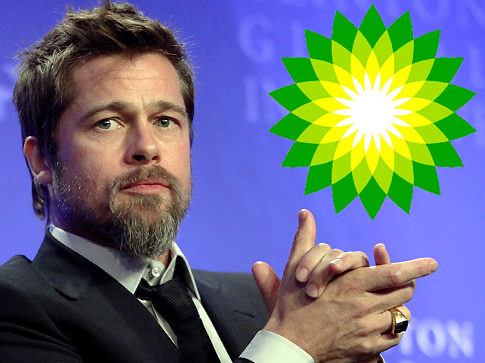 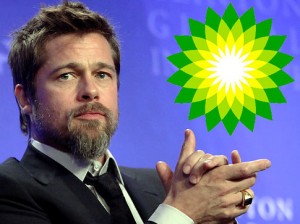 Brad Pitt is indignant about injustice.  So much so that the Hollywood icon/prolific accommodator of Angelina Jolie’s obsessive-compulsive reproduction disorder has stepped forward to speak on behalf of exacting justice against those who’ve wronged Mother Earth.

The Hollywood actor said he would “consider the death penalty for those to blame for the ruptured well that gushed millions of gallons of oil into the ocean.” When asked about the “people responsible for the crisis, the ‘Inglourious Basterds’ star said: ‘I was never for the death penalty before – I am willing to look at it again.'”

Bastian of moral authority Brad Pitt, who left his wife to cavort with a notorious seductress, isn’t recommending the death penalty for mass murderers, rapists or child molesters, and certainly not adulterers, but rather for BP executives for accidental oilrig explosions in the Gulf of Mexico.

If anyone possesses the right to express moral indignation, Brad Pitt sure does. Brad Pitt decided to “Make It Right” in New Orleans after doing his wife of five years wrong by abandoning her for a sultry mistress. “Mr. Pitt, 46, spearheaded the ‘Make it Right’ project to build 150 affordable and sustainable homes in one of the areas of New Orleans that was worst hit by Hurricane Katrina in 2005.”

Mr. Pitt’s provocative “fry the inglourious basterds” remarks were revealed as his life partner and mother to three biological and three adopted children, Angelina Jolie, was making a “goodwill visit to Sarajevo, Bosnia.”  What better way to remediate a sullied reputation than to portray yourself as a benevolent ambassador, environmental green advocate or a spokesperson indicting and sentencing corporate oil magnates to the gallows.

Angelina traveled to Bosnia to speak to “government officials about possible education programs to help resettle refugees still homeless, following the country’s civil war.”  Pitt should have gone with Angie to propose a Bosnian “Make it Right” project.  The trip could have been called “Infidelity Enterprises,” where shameless adulterers build homes for homeless Bosnians.

According to Ivy-cap-wearing Pitt, the answer to ensure accidents like the Deepwater Horizon oilrig explosion never scourge the earth again is to make an example of BP executives by administering lethal injections. Pitt is obviously of the mind that exacting the death penalty on a criminal of Tony Hayward’sstature ensures similar tragedies are prevented from reoccurring.

Nothing deters oilrigs from exploding more effectively than exercising the death penalty on a few key oil executives.

Film director Spike Lee recently completed a film entitled, “If God is Willing and Da Creek Don’t Rise.” In the documentary Brad “emerges a hero” for his humanitarian house building efforts. The film was supposed to end “on a positive note with the New Orleans American Football team winning the Super Bowl.”  However, the ending was changed to incorporate the premeditated BP oilrig explosion.

Mr. Spike “Do the Right Thing” Lee decided oil-soaked pelicans and oil threading through the Gulf was too important to leave out of the exposé so the director changed the ending to include British Petroleum’s deadly crimes.

With any luck, a man with Brad Pitt’s Congressional clout could potentially convince the federal government to try and execute BP executives.  Heck, the actor was able to convince America he was Jesse James. Then Spike can edit the film and splice into the ending that righteous defender-of-Mother-Earth, Brad Pitt, throwing the switch on the guilty so that “If God is Willing and Da Creek Don’t Rise,” can conclude on an upbeat note as originally planned.