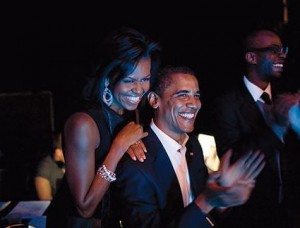 Nothing refreshes a hard working couple coming off an exhausting month of vacationing like changing into eveningwear and moving right into a “packed social schedule…with two major galas and a reception for college athletes.”

The duo’s upcoming packed social schedule starts with the President welcoming “collegiate star athletes to a White House reception.”  Obama and Michelle will honor exceptional student athletes “in more than a dozen sports.” With any luck, before the evening party, work-a-bee Obama will have an opportunity to work over the hardwood with a busload of dribblers.

After resting up the next day, the First Lady will throw on her haute couture and Mr. Obama will “don black tie” for the annual Congressional Hispanic Caucus Institute gala.  Two former White House guests, percussionist Shelia E and Mexican-American/ “Desperate Housewife” Eva Longoria Parker, will both be honored with awards for being… well, for being Hispanic.  Also receiving kudos is five-time Grammy award-winning trumpeter Arturo Sandoval who may be called upon to royally toot during the President and First Lady’s entrance into the event.

The Congressional Hispanics will also be graced with the presence of non-Hispanic icons like Harry Reid (D-Nev), House Speaker Nancy Pelosi (D-Ca) and Ground Zero mosque supporter, New York’s very own tolerant Mayor Michael Bloomberg, all of whom pride themselves on being Hispanic in spirit.

The next day, after sleeping in, Barry and Michelle will select outfits for the next big function, “the Congressional Black Caucus Foundation’s (CBCF) annual Phoenix Awards dinner.  The dinner will mark the culmination of the foundation’s 40th Annual Legislative Conference.”

Honorees will include: New Jersey State Assembly Speaker and Democrat Sheila Y. Oliver, as well as actor and humanitarian Harry Belafonte. Everyone knows Harry Belafonte of “Day-O” fame – he’s the Democrat and liberal activist who called President Bush “the greatest terrorist in the world.” The Banana Boat honoree believes Black Republicans are “tyrants,” and whenever overcome with affection for Hugo Chavez, breaks out in an over-enthusiastic “Viva la Revolucion.”

The CBCF function would almost be worth attending just to see if Barack and Michelle Obama jump to their feet and give a standing ovation to a passionate supporter of the “socialist revolution of Venezuelan leader Hugo Chavez.”

Also being honored is 88 year-old retired Washington Bureau Chief for JET Magazine, (new home to Desiree Rogers, former White House social secretary), Simeon Booker. Choreographer and former artistic director of the Alvin Ailey American Dance Theatre Judith Jamison, fresh off a gig at the White House dance party, is also an honoree. Mrs. Obama praised Jamison for being an “amazing, phenomenal, fly” woman and did so while saying “It’s a good thing” over and over and over again.

After enduring one star-studded affair after another, two very tired wild-and-crazy party animals will climb into a gas-guzzling Cadillac Stagecoach and slowly make their way up the gravel driveway outside 1600 Pennsylvania Avenue.  Once inside, the First Couple will take a short reprieve from unending merriment in order to regroup and gain the strength needed to continue to inflict mayhem on the rest of the country.