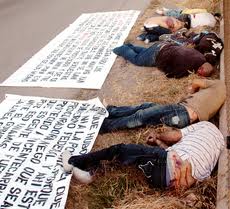 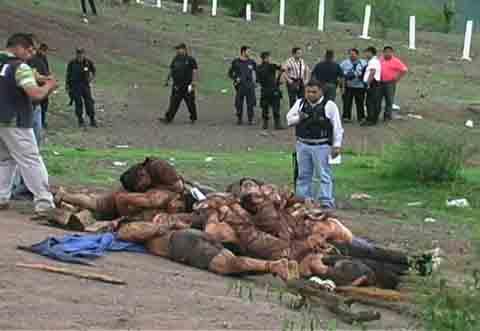 Whenever Barack Obama refers to the Arizona/Mexican border crisis, the President’s comments usually revolve around “ice cream, harassment and racial profiling.”  Yet it is not within the refuge of Arizona’s ice cream parlors that danger lurks.  Further south, a systematic massacre is taking place as violent criminals, drug-thugs and cartels declare open season on Mexican public officials in an unrelenting brutal blood bath.

Take for instance Gustavo Sanchez, mayor of Tancitaro in Michoacan state.  Recently, Sanchez and Rafael Equihua, Sanchez’s secretary, were both put to death Iranian adulteress-style. The corpses were found thrown, like bags of abandoned fertilizer, in the back of a flat bed truck.  “A drug cartel known as La Familia Michoacan is active in the area, but officials gave no indication the two men were killed by narco-traffickers.”

The Tancitaro prosecutor’s office said Sanchez and Equihua were “bound and blindfolded and had severe head wounds.”  At first it was thought the men were hacked to death with a machete, but now it appears the duo were “stoned to death.”

According to Mexican news agency Notimex, “Mayor Gustavo Sanchez Cervantes had taken over the top post in the city of Tancitaro in December 2009, after Mayor Trinidad Meza Sanchez resigned the post due to pressure from drug traffickers.”

It is still unclear whether Mayor Sanchez’s murder was drug-related.  However, a hint can be gleaned from a similar occurrence that took place a few days prior to Sanchez’s mangled carcass being discovered.  In northern Chihuahua the “mayor-elect … was shot in the head and chest by drug hit men” and left to die, barely clinging to life.

The head-chest shooting in Chihuahua took place one day after a mayor in a “town outside Mexico’s northern business city of Monterrey” was also assassinated.  In fact, since August Sanchez is the “fifth city leader to be slain in Mexico.”

Since “President Felipe Calderon launched his offensive on cartels in 2006,” 29,000 people have been slaughtered in a war between competing drug lords vying for turf. As a point of reference, the stack of Mexican bodies compiled in four short years is a few thousand shy of the 30,000 + seating capacity of Boise, Idaho’s Bronco Stadium.

While Barack Obama is busy guaranteeing illegals safe refuge in ice cream parlors, a mere 66 miles south of Tucson, Arizona the rate of violent death is 33 times higher than the annual rate of military deaths in Afghanistan.

The carnage is rapidly spilling over the border into Arizona as U.S. territory is being occupied by drug cartels and human smugglers.  Yet Barack appears more concerned with individuals who ethnically resemble people of Mexican origin having access to hassle-free ice cream cones than whether national security is seriously compromised.

In fact, 50 miles south of Phoenix, residents are warned not to use certain routes within the state because of “armed criminals and smuggling vehicles traveling at high rates of speed.”  According to Pinal County Sheriff Paul Babeu, “Mexican drug cartels literally… control parts of Arizona…scouts on the high points in the mountains [control movement] with radios… optics, [and] night-vision goggles.”

On the local level and even closer to home:

Since officials [in Arizona] formed a special squad [in 2008] to deal with home invasions, they have counted more than 200 of them, with more than three-quarters linked to the drug trade. In one case, the intruders burst into the wrong house, shooting and injuring a woman watching television on her couch. In another, in a nearby suburb, a man the police described as a drug dealer was taken from his home at gunpoint and is still missing.

Thus far Barack Obama’s response to the burgeoning crisis is feeble at best.  The President remains steadfast in the belief that every person should be given the benefit of the doubt when it comes to lawful citizenship. Obama talks as if Arizona law enforcement officials should hesitate before requesting identification from ethnic-looking individuals toting suspicious backpacks and night goggles if spotted in ice cream parlors accompanied by a child.

The President believes individuals need to be shielded from oppressive laws because failing to do so would be tantamount to the United States federal government sanctioning harassment and ethnic discrimination.  Barack is so unswerving in his determination to avoid racial profiling that it appears he is willing to risk infiltration by Al Qaeda terrorists, as well as cede large portions of U.S. territory to armed marauders.

Regardless of country of origin, the illegal-immigrant-friendly Obama administration remains steadfastly committed to protecting the rights of all visitors to enjoy 100% harassment-free frozen dulce de leche in one of Arizona’s many Cold Stone Creamery ice cream parlors.

Good thing, because after brutally slaughtering a Mexican mayor or two it’s comforting for members of drug cartels, who occasionally mosey over the border to avoid la Policies Federal, to know that, despite Arizona home invasions, beheadings, kidnappings, and border patrol-guard shootings, an amigo can be found in America’s most fair-minded public official, Barack Obama.