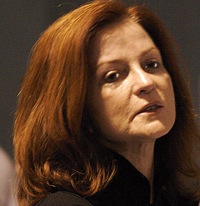 In Maureen Dowd’s latest Sunday Times op-ed piece entitled “Playing all the Angles,” the snippy columnist identified conservative women as “mean girls.” As the lovely and gracious Dana Perino said in response, Maureen Bridgid Dowd may “have a way with words” but the New York Times diva of editorial opinion is a perfect example of why the words “mean girls” always come packaged with a large dose of liberal estrogen.

The vermillion haired maven of maliciousness recounted sitting in the sun at the dedication of a bridge linking Arizona and Nevada.  Pint-sized Arizona Governor Jan Brewer spoke as Dowd claimed that her “Irish skin turned toasty brown.”  Egocentric Maureen, who likely burns not tans, shared concern that Brewer would notice the brownish hue and perform a citizen’s arrest on the spot.

Word of advice for Maureen before heading into the wilderness to escape incarceration: check that cracked compact mirror of yours because brown is not your color.  Rising to the surface of your epidermis is a lovely shade of envy-induced shamrock green.

Dowd’s interpretation that the Arizona governor’s struggle against a border invasion of gun runners, drug cartels and gangs is “open season on anyone with suspicious skin tone” proves that people at bridge dedications should always wear sun protection because it appears a New York Times columnist came away from one event with a serious case of heat stroke.

Dowd’s article called the time we live in “the era of Republican Mean Girls.”  The piece accused Republican women of being “grown-up versions of teenage tormentors” who steal boyfriends, spray-paint lockers, and “spread rumors that you were pregnant.”  All three scenarios are highly unlikely because the crowd Maureen runs with despises men, and if pregnant have an abortion before anyone gets the chance to spread the news.

Menopausal Maureen sounds like an envious schoolgirl trapped in a middle-aged body.  Miss Dowd may not paint lockers with spray paint, but rest assured she couldn’t steal a boyfriend from anyone even if she tried, which is likely the reason for the bitter vitriol.

In Maureen’s trivial world, “Jan, Meg, Carly, Sharron, Linda, Michele, Queen Bee Sarah and sweet wannabe Christine” are accused of “co-opt[ing] and ratchet[ing] up the disgust with the status quo that originally buoyed Barack Obama.”  Perhaps the most insulting portion of Dowd’s tirade was mentioning Barry’s name in the same sentence with women who have more smarts in one pinky finger than the entire Obama body politic.

Each woman on Dowd’s laundry list speaks the truth, stands for liberty, represents America, and has captured the interest of the nation. The op-ed column is in itself a spray-painting maneuver because green with envy girls seek attention even if it’s negative.

Maureen accuses conservative women of  “mistreating the help…belittling the president’s manhood…making snide comments about a rival’s hair or spending money on a men’s fashion show.”

Obama should feel belittled around women like Carly Fiorina, Meg Whitman, Michele Bachmann and Sarah Palin, because the President couldn’t even figure out how to order a U.S. Presidents for Dummies on Amazon let alone run eBay. Moreover, about the hair, when did Republican ladies ever make mention of Maureen Dowd’s artificially obtained pumpkin-colored tresses?

Nevertheless, Dowd claims Republican women have managed to change the “Hope and Change” mantra. Good for them – it’s about time someone revamped the rallying cry for those who follow the narcissistic neophyte to a more appropriately descriptive “Cope with the Deranged.”

Dowd defended Harry Reid by describing “the Boxer” as “slight…mild mannered and 70-years old.”  Maureen might as well have called the Senate majority leader Casper Milquetoast. The op-ed columnist described Reid finding himself in a race with Angle as Harry having “wandered into the surprise fight of his career – a race where the fur is flying.” Judging from Maureen Dowd’s description, the Senator from Nevada entered the race like an overconfident lightweight boxer who found himself in the ring being crushed by Juan Diaz.

Dowd’s article was somewhat “man”-obsessed. Barack Obama’s “manhood” came up, as did Angle’s “Man up,” debate suggestion, which is odd because Dowd also pointed out that a bespectacled Harry is “slight…mild mannered [and] easily taunted.”  If Dowd thinks Reid is so easily “taunted,” maybe Sharron is spot on and vapid Harry should just bite the bullet and “man up.”

According to Maureen, during the Angle/Reid debate, “With casino red suit and lipstick, Angle played the Red Queen of the Mad Hatter tea party, denouncing career politicians and ordering “Off with their heads!” Maureen Dowd should avoid calling attention to odd shades of  “red” in the same sentence as “head,” attached or unattached, and let’s just leave it at that.

In dowdy Dowd’s liberal world, if a conservative woman trounces a “master of back-room deals,” it is only because she “hates the press,” spouts “weird stuff,” and challenges Barack Obama.

In the Sunday “Playing all the Angles” invective, Dowd cited Harry “Milquetoast” reminiscing about his mother taking in wash from brothels during the debate. Angle all but responded, “Oh, cut the crap Harry, who are you kidding with that liberal, violin playing sob story stuff? ‘I live in a middle-class neighborhood …[and you] live in the Ritz Carlton in Washington, D.C.’” The op-editrix attempted to draw a comparison between Angle unmasking political claptrap and “hurling cafeteria insults,” which just doesn’t fly, in or out of the cafeteria.

Reid challenged Angle on health care and how important it is to have mammograms and colonoscopies saying, “If you do colonoscopies…colon cancer does not come ’cause you snip off the things they find when they go up and — no more.”  What both Harry Reid and the colonoscopy-conscious columnist failed to mention is that after Obamacare kicks in, the going up and snipping off will be done at a local 7-11.

Dowd was especially irritated by Angle’s questioning of Number Three in the Barry, Nancy and Harry “socialist triumvirate,” specifically the pointed questions about verifiable rags to riches truths, one of which Harry described as a “really low blow.” In defense of “mousy” Harry and inspired by Sharron Angle, post-debate, Maureen in fluffy pink bunny slippers promptly “scurried” over to her laptop to administer a liberal low blow to the GOP “mean girls” whose guns and gumption make Democrat Dowd very “jittery.”

News flash to Maureen: Republican women wouldn’t waste their precious time spray-painting your rusty old locker. GOP grizzly girls are doing the hard work of saving liberal women like yourself from Obama bad boys who, if given the chance, would graffiti the whole damn country and cancel every American’s health insurance, which should be making you “jittery,” not Republican women.