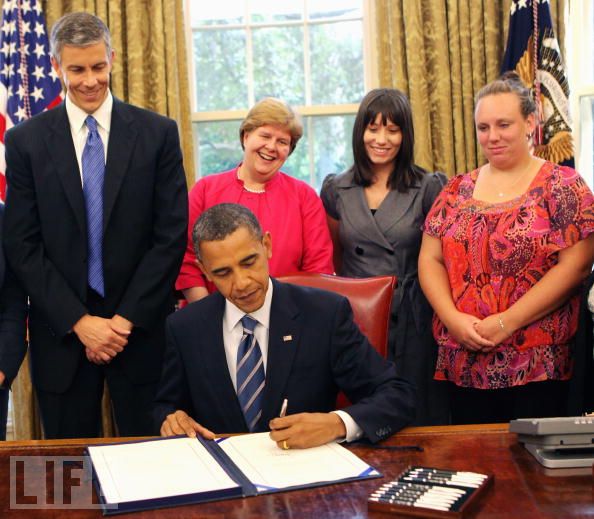 The story of Amanda Van Ness is exactly the type of disingenuous political display that Americans, regardless of political party, have grown to despise.  In the same way Leslie Macko, a woman charged with grand larceny, was dragged to the Rose Garden pulpit to convince America that extending jobless benefits was imperative, Ms. Van Ness was exploited as an Oval Office backdrop for yet another urgent stimulus bill falsely promoted by Barack Obama as a necessary bulwark to thwart job loss.

During the August recess Democrats returned to Washington DC to approve an emergency $26 billion jobs bill supposedly needed “to protect 300,000 teachers and other nonfederal government workers from election-year layoffs.” One of these was Toledo, Ohio kindergarten teacher Amanda Van Ness.

The stimulus measure proposal sought to give “governors $10 billion in education aid to hire and retain certain local school district workers and about $16 billion to help cover increased costs for Medicaid.” Both education and Medicaid are laudable, tear-jerking causes that always manage to justify the pilfering of a few billion dollars by suggesting things like raising taxes on U.S. businesses abroad.

The pressure to pass the jobs stimulus bill once again hinged solely upon saving children, education, and America’s uncertain future. Immediately prior to the start of the school year, Democrats painted ominous pictures in the minds of Americans that depicted neglected school children occupying teacherless classrooms all across America.

Lawmakers streamed back to Washington for a one-day session as Democrats declared a need to act before children return to classrooms minus teachers laid off because of budgetary crises in states that have been hard-hit by the recession.

In a Rose Garden appeal reminiscent of the day Obama stood alongside convicted felon Leslie Macko, the President beseeched lawmakers to not “stand by and do nothing while pink slips are given to the men and women who educate our children or keep our communities safe.”

According to Obama, spending another $26 billion “should not be a partisan issue.” The President chastened those he depicted as opposed to saving jobs, saying “failing to pass the bill would set the country back at a time when it needs to be moving forward.”

Republicans maintained the bill was another “giveaway to teachers’ unions and an example of wasteful Washington spending.”  Thus, “the legislation was approved mainly along party lines by a vote of 247-161” and just in time to load up yellow school buses and provide teachers a reason to breathe a sigh of relief.

School districts received $10 billion in federal funds to “rehire laid-off teachers or to ensure that more teachers [wouldn’t] be let go before the new school year begins…avert[ing] the crisis for this year.”

In opposition to the bill, Congressman David Dreier, (R-CA) expressed the opinion that “Teachers, nurses and cops should not be used as pawns in a cynical political game,” which is where “political pawn” and Toledo public school teacher Amanda Van Ness comes in.

Amanda is the lovely young woman who clapped as the President signed the $26 billion dollar emergency measure “to save 160,000 teacher and other government jobs.”  Seeing Amanda standing over Obama’s shoulder smiling as he frittered away another $26 billion, one would never guess that Ms. Van Ness “already knew she’d lost her teaching job [due] to budget cuts and low seniority.”

The Oval Office theatre production was so well orchestrated Obama might as well have had “Dangerous Minds” actress Michelle Pfeiffer reprise her role as a dedicated inner-city teacher.

To set up the bill signing in the Oval Office, the American Federation of Teachers contacted local union President Fran Lawrence and asked if she knew of a Toledo teacher who could come to Washington to stand with the President.

Ms. Lawrence thought of Ms. Van Ness because she had been notified about her job loss. Ms. Lawrence said she doesn’t feel the situation is ironic because Ms. Van Ness was already laid off when the stimulus bill was signed.

The federal legislation was supposed to supply the funding for “school districts to call back laid-off teachers,” like Amanda, “or to save others from losing jobs,” like Amanda, who next month will officially be without a teaching assignment.

So what in tarnation was Amanda smiling and clapping about?

Possibly the young kindergarten teacher thought the “$7.6 million of federal funds” received by the Toledo district would keep her working. Or perhaps Miss Van Ness had faith to believe that agreeing to pose as political prop for a job stimulus sideshow would inspire Obama to grant a Presidential pardon, sparing himself another “Leslie Macko” moment, which would also have the added benefit of preserving a teaching job for the part-time thespian.

Regrettably, the gullible Ms. Van Ness found out quickly that the White House visit was for naught. Two weeks after the AFT flew the eager educationalist to Washington DC and one day prior to school starting, the woman exhibiting exuberant appreciation in the Oval Office was officially laid off from teaching kindergarten at Pickett Elementary School in Toledo, Ohio. Amanda was then quickly “reassigned as a second-grade permanent substitute at Reynolds Elementary School because a position opened up unexpectedly,” after which Van Ness was laid off a second time.

Fortunately for the White House, Amanda will be on hand Thanksgiving week just in case the President needs a group of bit players to provide a spur-of-the-moment standing ovation.  Ms. Van Ness can reenact her energetic jobs bill appearance in the Oval Office by clapping wildly as Barack Obama swings yet another fiscally irresponsible hatchet at America’s neck, right after publicly pardoning a turkey.