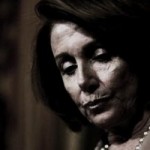 Bedecked in one of many $10,000 golf ball-sized pearl necklaces, multimillionaire and part-time viticulturist Speaker of the House Nancy Pelosi dazzled the audience at a United Steelworkers event where she expressed revulsion over “income inequality in America.”

The keynote speech addressed the “disparity of income and the gap between the rich and the poor, as well as the need for jobs.” America’s matron of fairness spoke on behalf of the Democrat Party’s plan to equalize the wealth of the nation, saying:

We’re talking about addressing the disparity of income where the wealthy people continue to get wealthier and some other people are falling out of the middle class when we want to bring many more people into the middle class.

If what Nancy shared with the USW is any indication of what lies ahead for America, Joe the Plumber had better hide more than his copper pipes because liberals have a strategy in the works to carve up all facets of private capital. According to the Speaker, who by the way is worth anywhere from $14,753,883 to $83,084,990, the left plans to deal directly with “the disparity of income where wealthy people continue to get wealthier.”

To the delight of union workers, Ms. Nancy also conveyed that “disparity is not just about wages alone… [but]… about ownership and equity.”  According to Pelosi, “fairness in our country” can only be realized if the government establishes parameters as to how much Americans can earn and possess, as well as the amount of equity an individual should accrue if selling personal property.

Pelosi’s “disparity is about ownership and equity” statement is quite shocking, especially coming from a person who owns the Zinfandel Lane Vineyard and the Skellenger Lane Vineyard in California’s Napa Valley.  If Nancy really plans to forge ahead as an exemplar of fairness, can wine-loving proletariats across America look forward to receiving a piece of Pelosi’s vineyard pie?

Not quite, because despite Nancy spouting the rhetoric of property and equity reallocation, getting the Speaker to ever agree to willingly share personal wealth is highly unlikely.  Although diametrically opposed to the concept of the fundamental natural right of individuals to pursue “life, liberty and property,” the liberal idea of wealth redistribution appears to be solely directed toward the common folk while granting a level of dispensation to the elite. Therefore, it’s unlikely Nancy will be divvying up pearls and possessions to further fairness in America anytime soon

It’s becoming more and more apparent that the left has a collective definition of “life, liberty and personal happiness.” The liberal vision is for the masses to be dictated to by an oppressive bureaucracy whose goal is to further fairness at the expense of individual sovereignty. Thus the Speaker’s speech to the steelworkers only underscored how the overbearing policies of the left impose on America a dictatorial form of governmental extortion.

Take for example Barack Obama sanctimoniously chastising the nation for desiring to retain what is rightfully acquired through God-given freedom and hard work. Coupled together with the President’s aggressive social agenda, Pelosi’s words only give further insight into the objective of the left’s ongoing crusade to deny Americans access to Creator-endowed rights

The left’s intention is not surprising, because liberals take offense to any hint of God-infused politics. Yet with the same zeal, secular politicians of Pelosi’s ilk proselytize for policies and legislation that inflict on America a gospel of government and do so with an air of evangelical superiority.

The hypocrisy and inherent contradiction are exemplified by Nancy Pelosi, who identifies with the pro-choice mentality: “Keep your laws off my body.”  However, in attempting to promote socialism, Pelosi refuses to “Keep laws off money and personal property.” The very leaders that want to exploit the law to impose their idea of fairness are the very same leaders who oppose the law being forced on them for moral reasons.

Wealthy, propertied leaders like Nancy Pelosi who condemn Americans for acquiring personal property are on a par with corrupt clergymen who preach holiness and chastity on Sunday and Monday through Friday live secret lives of perversion.

The Speaker’s speech presents America with an obvious question: How exactly does vineyard owner/millionaire Nancy Pelosi plan on “addressing the disparity of income?”   Who exactly decides what is fair or unfair?  Is Nancy willing to begin the process of “fair” redistribution by allotting 27 cents apiece of the $83 million in personal Pelosi wealth to 300 million less-fortunate Americans?

If the wealthy, of which Nancy Pelosi is one, invest money in “entrepreneurial packages” and make money, then why did Pelosi invest $50,000-$100,000 in T. Bone Pickens’ Clean Energy Fuel Corp? Isn’t the pressing issue that the left believes needs to be addressed by the federal government “wealthy people continuing to get wealthier?”

Furthermore, how does Nancy plan to handle the disproportionate ownership and the equity earned by being a property owner? Will Nancy begin demonstrating “fairness” by meting out one Zinfandel grape to each and every American?

The Speaker of the House and the Democrat Party treat the nation similar to a Pelosi family vineyard. The left’s oppressive policies are attempting to tie America to a trellis of social justice in order to establish collective growth.  Pruning, managing and regulating the size of the crop is part of a bureaucratic plan to distribute the fruit, or “spread the wealth,” in what is deemed by liberals to be a fair and equitable way.

What Nancy Pelosi and Barack Obama fail to realize is that the blight of socialism is in the process of destroying production and is presently turning out a national harvest of extremely bitter fruit.