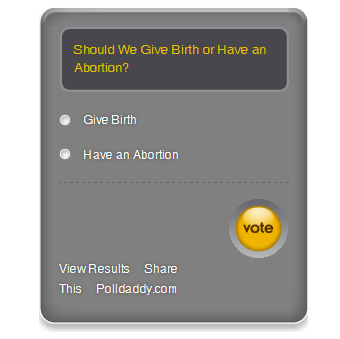 We live in a society where public opinion rules the day.  Our nation is poll-driven. It’s gotten so bad that buying coffee demands a consensus. In fact, an inexperienced man was placed in the most powerful position in the world because 52% of the voting population signed onto an opinion-driven lie that Barack Obama was the right person for the job.

Taking a poll as to whether blueberry or corn is the better choice when buying a muffin is one thing.  However, a married couple sponsoring an online poll to determine whether or not to have an abortion either reveals that the moral decline of society has hit an all time low, or a shrewd pro-life couple is attempting to make a solemn point.

In Apple Valley, Minnesota, a married couple claim to have conceived a baby and have now placed the developing fetus’s life in the hands of Internet respondents, an unimaginable scenario that appears to be true. The question is whether the couple is serious or attempting to expose the callousness of a culture obsessed with having power over life and death. The child in utero, “Wiggles,” is now the subject of a website, “birth or not,” which is home to a “Give birth/Have an abortion” online poll button.

Amidst the echo of a beating heart and the whooshing of blood rushing through an unbiblical cord feeding life into its tiny, frail frame, a fetus the size of an apple is at the center of a firestorm of controversy about whether the child’s fate may be decided by a faceless crowd giving a thumbs-up or down vote.

Allegedly, Alisha and her husband Peter decided to let an online vote decide the destiny of little Wiggles because Mom “was still healing emotionally from the most recent of three miscarriages.” In response to the pain of loss, the distraught woman purportedly feels the best way to mend would be to murder the fruit of another pregnancy, and apparently a majority of web respondents agree.

Mrs. Arnold claims that following the miscarriages she was finally getting her figure back and “living a healthier lifestyle.” After conceiving a fourth time, Mrs. Arnold contends that she “wasn’t sure what to do.”  Rather than subjecting her svelte self to baby weight the expectant mother, together with her husband, designed a survey button on a website to help guide her toward a choice as to whether she should preserve or forfeit her girlish figure.

Thus far, the vote in favor of the unborn child being granted life is “47 percent.”   Fifty-four percent want the couple to abort. Although shocking on one level, on another level abort-or-not web-based surveys are certainly in keeping with the ever-growing popularity of online suicide pacts.

As for the “keep” or “dispose of” Wiggles question, there’s still time for those who want to weigh in. Mrs. Arnold says, “We want to give people a chance to voice their opinions in a real situation where it makes a difference.”

If not a hoax, the expectant couple has until the child is at 19 weeks to decide, which is when extracting the infant entails more painful and gruesome procedures. On December 7th, Pearl Harbor Day, the Arnolds plan to close down the website, tally the votes and either pick out a matching mobile and wallpaper for the nursery or drive to the abortion clinic where Alisha, to the roaring approval of a cyberspace crowd, will submit little Wiggles to a second trimester dilation-and-extraction abortion.