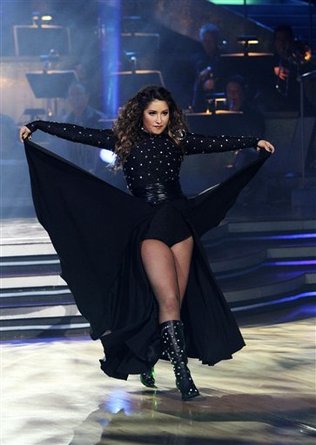 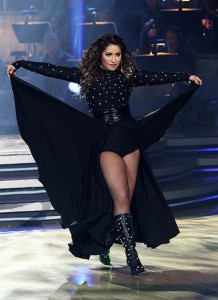 In “defiance” of “skepticism” on the part of Dancing with the Stars judges Carrie Ann Inaba, Len Goodman and Bruno Tonioli, Sarah Palin’s daughter/single mother Bristol Palin is one of three dancers vying for the ultimate DWTS prize. Like Mom, Bristol ‘the pistol‘ sure has chutzpah. Unintimidated by pop stars, child stars, or Frances ‘Baby‘ Houseman, when asked to be part of the mirror globe trophy competition Bristol left fishing poles behind, packed the Pampers into her 1997 F-150, and drove non-stop from Alaska to L.A.

Casting no aspersions on Bristol’s competitors, Pistol Palin is the only contestant with zero experience wooing the cameras, exuding emotion on demand, or wriggling with Patrick Swayze.

Lacking emotive acting skill and dancer Cheryl Burke’s hair-tossing ability, Bristol’s start was shaky, but “gosh darn it,” the girl stuck with it. For Miss Palin’s Dancing with the Stars opening boogie, the abstinence activist shimmied onto the parquet in an unabashed parody mocking liberal critics like PBS honoree and SNL buffoon Tina Fey.

The thing about this show is, you get people who come from an entertainment background… Bristol’s not any of those things… She’s the most normal person; sweet, down to earth … like a friend you’d hang out with… So for me as a coach… this is one of my proudest moments, taking a non-dancer and turning her into what she is now.

After consistently low leader board scores, Palin somehow received more votes in the semi-finals, triumphing over high-scorer Brandy Norwood. The Bristol/Ballas dance company was catapulted into the finals along with danseuse/dirty dancer Jennifer Grey and the gregariously sexy Disney star and pelvic thruster Kyle Massey.

After the shocking elimination, a sniveling Brandy whined: “I don’t know how to feel right now, it hasn’t processed yet for me.” Clearly, Brandy was convinced she was one dancing shoe away from glory, and in defeat lacked the civility she exhibited when executing a 57-point Paso Doble and Argentine tango.

Bristol’s mother, Sarah Palin, once said something about “contested primaries” that aptly pertain to voter-driven dance competitions: “Despite what the pundits want us to think… they are democracy at work, and that’s beautiful.”

Conceding the loss, Brandy’s partner Maksim Chermerkovskiy responded to boos from the singer’s fans, saying “People vote and their voices count, and I love the fact that the show represents that.”  Born in the Ukrainian Soviet Socialist Republic (UkSSR) gives Maksim a true appreciation for the democratic process.

Jeers aren’t the worst of it. “Upset that the political figure’s daughter was on the show when he didn’t think she was a good dancer,” a drunken, expletive-spewing, shotgun-wielding yahoo used his TV as a target and then kept police at bay for 15 hours.

Across the board, liberals are apoplectic and attribute Bristol’s success not to quickstep agility, but to “republicanism” driven by Mama Grizzly’s fan base. Lisa Gutierrez of the web-based Kansas City Star lamented, “Bristol will now go on to win the whole shebang.  She doesn’t deserve it.  Everyone knows it, even, I suspect, the people who keep voting for her.”

How ironic, liberals blaming excessive voting for an “undeserving” contestant being in contention to win the “whole shebang.” If the coveted, oversized mirror ball trophy finds a home with Bristol ‘the pistol’ way up in Wasilla, Alaska, liberals are the reason. Wasn’t it two just years ago that “democracy at work” taught Dancing with the Stars viewers to vote for an unqualified, “ubiquitous” candidate who ended up walking away with the ultimate prize?

What part of “Bristol the Pistol” being about liberal hypocrisy and not DWTS don’t people get? If we can’t apply the idiocy of liberalism to everyday examples, that people can easily understand, and point out how liberals have one standard for themselves and another for everyone else…we’ll never win the argument!