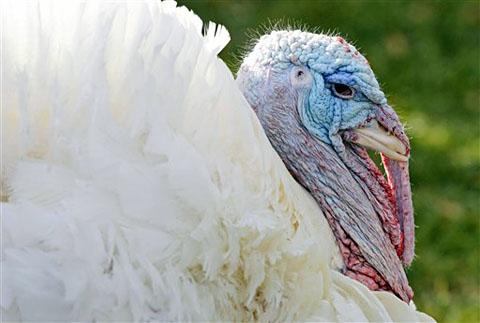 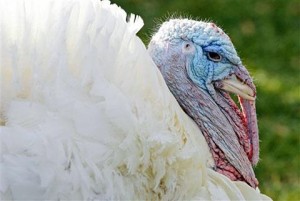 Civic-minded Barack Obama adhered to tradition and, as always, celebrated a godless Thanksgiving.  Nevertheless, the President’s public display of Thanksgiving-inspired community activism and concern for the needy, be they turkey or human, provided America with more than one insight into the thoughts, nature and religious leanings of President Obama.

Obama’s participation in Thanksgiving festivities began early in the week with a turkey pardoning.  Those in attendance at the gobble-fest were two turkeys, a President and a couple of telling statements.  The Rose Garden event even included comedic references. The always witty Obama said, “For the record, let me say that it feels pretty good to stop at least one shellacking this November.”  Barack’s self-deprecating allusion to Democrat congressional carnage and a left side of the aisle feather-plucking was met with nervous cackling.

Obama’s Meleagris gallopavo pardon took place fresh off a Barbara Walters interview where, when asked if he could beat Sarah Palin in 2012, Obama swore he doesn’t “think about Sarah Palin.” However, at the pardoning ceremony, caught up in turkey-dispensation self-importance, Obama must have forgotten his recent response to a Palin-for-President question.

Spared the chopping block, Apple and Cider were chosen from a 25-bird competition “that involved strutting their stuff before a panel of judges, with an eclectic mix of music playing in the background.”  The President defined choosing poultry-for-pardon as a “turkey version of ‘Dancing with the Stars.’” Are Americans supposed to believe that possible presidential contender Sarah Palin has yet to cross the mind of a President who apparently was one of millions tuning in to “Dancing with the Stars” to see her daughter Bristol Palin do the quick step?

In all fairness to the President, during his Thanksgiving/Weekly 770+ word address, Obama did thank the troops and even included a one-word reference to “God-given bounty.” Still, for the most part, Obama’s Thanksgiving message largely omitted God-directed gratitude and focused instead on the religion of communalism. Also included were Thanksgiving favorites such as:  Clean energy and education reform, job creation and deficit reduction, as well as an entreaty for bipartisan cooperation that, if Republicans agree to submit, could potentially transform Barry into an appreciative beneficiary.

Most of Barry’s Thanksgiving comments were tinged with Obama philosophy that stresses what he perceives to be the “distinctly American impulse to give something of ourselves,” which really means “You should all be doing more of what I think you should be doing.” Judging from the President’s social policy inclination, being viewed as the dispenser of alms to the less fortunate explains the President’s inclination to show appreciation to no one but himself.

Moreover, Barack’s notion of Thanksgiving is just another excuse to advocate community activism, while justifying the administration of philanthropy on behalf of a nation proven more than capable of altruistic behavior without prodding from the government.

Nevertheless, in keeping with the self-affirming tradition of dedicated cooperative living, this year that living embodiment of selfless charity, Barry, together with Michelle, swathed in a $500 Prova scarf, Grandma Marion, Malia, and Sasha, delivered to Martha’s Table two Butterballs® that tragically failed the turkey-strut competition.

Perhaps the most unsettling aspect of Obama’s annual Thanksgiving routine is his predictable exhibition of charitable works, complete with all the trimmings, but void of reference to God. For Americans expecting something more, it’s important to remember that public displays of beneficence are exercises humanists exploit to placate the conscience and to achieve non-religious gratification through external displays of good works and self-righteous concern.

For Barack Obama, nothing spells Thanksgiving like “Sharing the wealth,” especially if one can do the sharing under the admiring gaze of a fawning MSM and to the delight of paparazzo flash bulbs. Lindsey Buss, President and CEO of Martha’s Table, lauded the President and family for “Their example of service and the spotlight they bring to the challenge of hunger and nutrition, especially for children, is a tremendous asset for all of us working to find solutions to poverty.”

If Jesus’ words are to be taken literally, prior to partaking of a gastronomical White House Thanksgiving that didn’t “exactly match the first lady’s obesity message,” the Obama family were “honored by others” and, in turn, were recipients of a reward “in full” normally bestowed by God on the charitable who practice good works in secret.

Lest Obama forget, Thanksgiving is still a holiday where thanks should be exclusively given to the Provider of both life and provision by a God-dependent nation founded upon a Judeo-Christian foundation. This year the presidential cornucopia was overflowing with interview memory lapses, “Dancing with the Stars” references, turkey liberation, self-aggrandizing pumpkin pie distribution, disingenuous bipartisanship, and food pantry empathy that abounded with appreciation for Obama.  Nevertheless, amidst all the Thanksgiving bounty still missing from the President’s banquet was adequate reference to, or thankfulness toward, God.