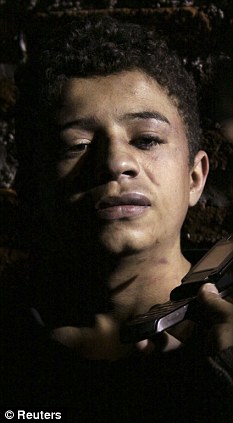 On more than one occasion, Jimenez was picked up, but was promptly released by military forces that were “duped” by the boy’s childlike appearance.  In fact, wily Edgar managed to “dodge capture by authorities four times … including a narrow escape…[in a] Mexican army [raid] at a strip club called Fantassy,” where “The Cloak’s” escape was likely achieved compliments of a skateboard.

Much to the surprise of Mexican authorities, Jimenez and his family call San Diego home.  The close-knit clan consists of breadwinner Edgar, two sisters, and Mom. Evidently, American born children of Mexican descent feel comfortable traveling back and forth across the border earning a living at $3,000 per hit, acquiring surgical skills, figuring out where to dump bodies, and being introduced to the dark side of Mexico’s drug subculture.

Edgar obviously didn’t listen to his mother when she insisted he seek out wholesome friends.  El Ponchis’ gang was originally an arm of “one of Mexico’s most powerful trafficking cartels.” The leader, Arturo Beltrán Leyva, was killed by Mexican Marines in a “lengthy gun battle,” after which the drug kingpin’s replacement, Julio (El Negro) Padilla, became Edgar’s new boss.

Mexican drug gangs are notorious for pulling very young people into drugs and violence.  In fact, recently in Palomas, Mexico, 20 headless bodies, possibly the result of Edgar’s handiwork, were bound for “unmarked graves in a section of [a Juarez] cemetery known as the narcofosa or ‘the graves for the headless.’”

According to El Ponchis, his sister Isabel’s boyfriend plied him with drugs and told him to either kill or be killed himself. Edgar must have gone on one helluva binge because the youngster enthusiastically contributed to the bloodbath and agreed to lead “El Negro,” a gang named after Julio Padilla.

After being intercepted boarding a plane en route from Cuernavaca to Tijuana, Edgar apologized to authorities for participating in three years’ worth of butchery. The teenage boy confessed that he “regretted all the murders he had committed” and maintained that “I didn’t join [the gang], I was pulled. I got high on weed and didn’t know what I was doing.” Jimenez also told Mexican law enforcement that if released, he plans to “go on the straight and narrow,” and pursue a career path that doesn’t require burying cadavers that could double for headless horsemen.

Jimenez was only caught because the youthful offender, together with other machismo suspects, “allegedly confessed” on the Internet that they had “killed several men [who were] found hanging from bridges in Cuernavaca.” Nevertheless, after escaping multiple times, a number of south-of-the-border craniums were given a reprieve when El Ponchis was detained and placed under the watchful eye of Mexican authorities who, thus far, have somehow managed to keep their heads.