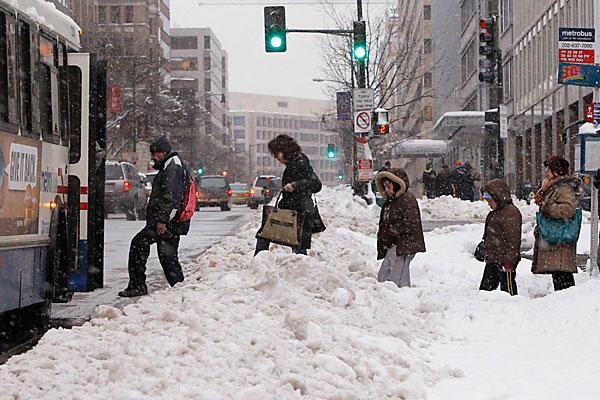 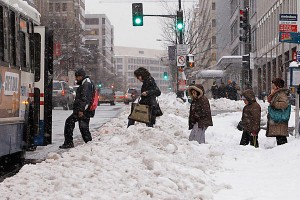 Liberals talk to grown people like idiots.  It’s endemic to the species.  As far as I’m concerned, New York City mayor Michael Bloomberg is a liberal. I won’t go into why, but even if Mike did nothing else besides speak to adults as if he’s a kindergarten teacher didactically reading The Boy Who Cried Wolf, to a group of 6 years-olds at story time, to me he’d be a liberal.

My theory is that Michael thinks we’re all stupid was firmed up during the last two snowstorms in New York City. After messing up big time during the last winter storm, Mayor Bloomberg, before the first snowflake hit the ground, scrambled to appear accountable, concerned and Mikey-on-the Spot.  Mike was committed to clearing the white stuff, instructing the clueless and reassuring New Yorkers they were in able hands.

The only thing missing was Mike, dressed like Nanook of the North riding atop a Big Apple plow like a musher in the first Northeast United States sanitation truck driven Iditarod.

Michael must feel responsible to personally pack lunch and place snowshoes and warm scarves on each person in New York City. That is the difference between a liberal and a politician like Chris Christie who unapologetically went to Disney World and views grownups like full-fledged, able-bodied, mature people.

Michael B., on the other hand, gave a stunning press conference at the NYC Office of Emergency Management that said more about what liberals think of regular people than it did about clearing snow.

Mike took us through grueling a time line reiteration of everything from how many cars were towed to how people were kept from being stuck in the middle of the street to telling people to drive with caution. Clear your driveway and walk, call 311 instead of 911, help a neighbor, please don’t throw snow into street, get a quart of milk for an elderly neighbor, and on and on and on.

During the press conference New Yorkers were subjected to Michael covering every subject from “its better for children to be in school” to the Dr. Atkins-don’t-slip-and-hit-your-head warning, “when you walk or drive on the ice – be careful.” Michael must think most people don’t know to walk carefully on ice.

Nevertheless, after speaking in English to American citizens living in NYC, Michael felt compelled to address Spanish-speaking residents both legal and illegal.  The second group being made up of those who shouldn’t be walking, riding bikes or living in the city in the first place.

Mike, God love him, spoke Spanish with the same ease and finesse as someone trudging through 18 inches of snow in 50 mile an hour head winds, very, very painfully for anyone unlucky enough to be listening. Not only that, but the diversity mayor discriminated against the Miao-Hmong speaking people, as well as the 37 other languages spoken in Nueva York La Gran Manzana.

Michael assured New Yorkers, some of whom just released their vehicles from ice tombs still in place since the last snow storm, that by the end of the day all city streets will have gotten at least “one pass” with a snow plow. Which means:  Quickly dig out the car you freed yesterday before the NYC Sanitation Department barricades it in a second time with a huge mound of ice and snow.

All in all the first snow storm of 2011 went well and as a native New Yorker, albeit living on Long Island, I can’t wait ‘til next week to be tortured again by Michael Bloomberg subjecting us all to another elementary school level press conference in both English and Spanish and if we’re lucky maybe even Miao-Hmong too!