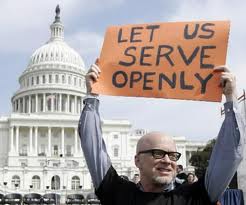 The past few months have been quite a season of hope and change for America’s gay community. Barack Obama has a new openly gay social secretary, Jeremy Bernard, marriage is no longer narrowly defined as being between a man and a woman, and in the Middle East, when not dodging mortar fire the troops on the battlefield will now be mandated to participate in gay sensitivity training sessions.

Couple that with Sundance Film Festival indie lesbian family/sperm donor-Dad favorite “The Kids are Alright” being nominated for four academy awards, and not since “Brokeback Mountain” has Queer Nation risen to such heights in America.

The President of the United States, who first opposed gay marriage, then prayerfully “grappled” with the concept, finally agreed with the Academy of Motion Picture Arts and Science’s choice of a potential Oscar winner and reversed his puritanical view on same-sex nuptials.

Barack Obama, on an extended sabbatical from teaching constitutional law, sided with Massachusetts Federal District Judge Joseph Tauro that DOMA, the 1996 Defense of Marriage Act, is unconstitutional and discriminatory.

In an effort to undermine the God-ordained one-man/one-woman institution and further deconstruct the fabric of American society, Obama felt inclined to cross the great divide and side with Carson Kressley. In doing so, Barack personally laid the axe to the root of traditional marriage and time-honored convention.

Speaking on behalf of the President, Attorney General Eric Holder said that between 2008 and 2011 America’s nouveau-centrist President has “concluded that the administration cannot defend the federal law that defines marriage as only between a man and a woman.”  According to Holder, President Obama had an epiphany and realized:

[T]he congressional debate during passage of the Defense of Marriage Act ‘contains numerous expressions reflecting moral disapproval of gays and lesbians and their intimate and family relationships – precisely the kind of stereotype-based thinking and animus the (Constitution’s) Equal Protection Clause is designed to guard against.

In the run-up to the 2012 election the decision to redefine marriage appears to be Barack’s attempt at buttressing the liberal base, a move some conservative pundits believe is an “inexplicable political error.” Yet, Barack has survived many such miscalculations. Does anyone remember the decision to have Khalid Sheikh Mohammed tried in a U.S. civilian court?

Thus, to reinforce a recent shift to the center, Barack Obama yielded to the romantic notions of 2% of the population, disregarded the consensus of the 98% who supply the societal glue that holds the nation together and, in the form of a policy change sent a belated wedding card to Mrs. and Mrs. Ellen and Portia DeGeneres.

A President who put his hand on the Bible and swore to uphold the Constitution now feels he has the authority to decide what is and what is not constitutional. This is a problem because now, any American who clings to the outmoded idea that marriage has distinct gender roles, or who disapproves of the gay/lesbian lifestyle based on moral or religious convictions is “guilty” of what the President calls “stereotype-based thinking and animus.”

Weakening the sanctity of marriage obviously wasn’t enough iconoclasm for Barack the Centrist. About the same time that Obama gave new Dads Anderson Cooper and Ben Maisani the go-ahead to tie the knot, he also issued an edict that Pentagon officials waste no time in launching an “extensive force-wide program to ease the process of integrating open homosexuals into the ranks, including into close-knit fighting units.”

In other words American combat forces in Afghanistan, in between fending off Taliban attackers “armed with AK-47s, rocket-propelled grenades, mortars and explosives vests,” must now spend time in a war zone learning how to agreeably share a foxhole with Nathan Lane.

Army Command Sgt. Maj. Marvin Hill, the top enlisted man in Afghanistan and an outspoken proponent of ending the ban on gays serving openly in the military, said that “the sessions on respecting gays’ rights will go right down to the forward operating bases, where troops fight Taliban militants.”  According to the Sgt. Major, the plan is to “execute that training right …on the battlefield.” No unit will be exempted.

Even though 37 US soldiers have been killed in Afghanistan in less than two months and despite his enthusiasm about bisexual recruits Sgt. Hill seems unsure whether touchy-feely get-along-with-a-gay sessions will distract combat forces, which would put the lives of fighting men and women in danger. Referring to gay sensitivity sessions in a war zone, Hill said “We hope that it will have little impact on … combat and security operations.”

While “hope” continues to “spring eternal,” Elaine Donnelly, head of the Center for Military Readiness, said “it is ridiculous to train combat Army soldiers and Marines as they engage in daily combat with tenacious insurgents.”

Likely to be accused of animus-filled insubordination and lack of proper prioritization techniques, Ms. Donnelly said: “It’s absurd because the military has more important things to think about in that dangerous part of the world. For the administration to say this is more important …shows flawed priorities at best. It is ridiculous.”

So there you have it.  Barack Obama’s idea of “Hope and change” rears its head again. On the military front, personnel on the battlefield hope that searching for IEDS with RuPaul has “little impact on their combat and security operations.” And change means that in the heat of battle, exhibiting sensitivity to gay soldiers takes precedence over staying alive, and determines whether a soldier will be forced to leave the military or not.

On the domestic front, Barry delivered hope to gay America by changing his mind on both traditional marriage and the sexual orientation of his social secretary. In Barack’s mind, he has brought true hope and lasting change by identifying the constitutional error in the “prejudicial, spiteful” and “malevolently ill-willed” thinking that traditionalists exhibit by rejecting same sex marriage.

Barack Obama’s revitalized pro-gay agenda, be it on the bloody battlefield of Afghanistan or in wedding chapels across the nation, introduces a new level of concern about a nation who puts gay politics before the security of combat troops and the time-honored institution of traditional marriage.  While gay America mistakenly believes “The Kids are Alright,” the remainder of the nation wonders whether the country will ever recover from the damage done by a misguided President’s progressive vision for America.