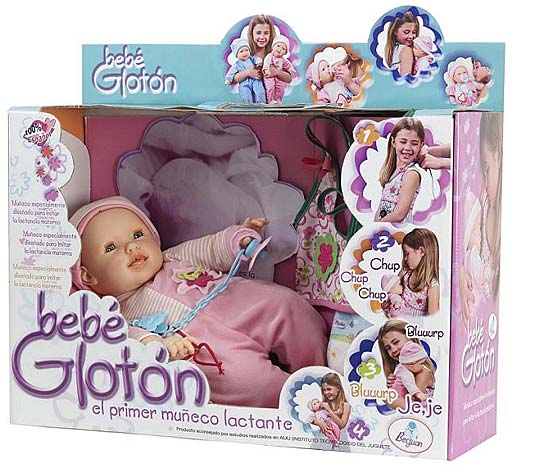 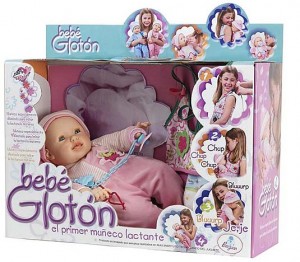 Call me cynical, but am I the only person who finds it a tad coincidental that one month after Michelle Obama promised tax breaks for nursing mothers a baby doll hits the market that simulates breastfeeding? Infant doll Bebé Glotón is marketed by toy maker Berjuan, located in Onil, Spain, which happens to be just a hop, skip and a jump from where Michelle vacationed last summer.

If raising a generation of svelte children to spurn junk food and embrace breastfeeding is the goal, Bebé Glotón could be a toy that assists America’s First Lactation Specialist in her quest to get breastfeeding to latch on…I mean catch on.

Looking ahead to what she will do in the second year of “Let’s Move,” Mrs. Obama said: “We also want to focus on the important touch points in a child’s life. And what we’re learning now is that early intervention is key. Breastfeeding. Kids who are breastfed longer have a lower tendency to be obese.

Apparently, the goal of Michelle’s anti-Similac® initiative is to put the “spotlight on nursing as a way to reduce childhood obesity.” Few would argue that Bebé Glotón could be an early childhood indoctrination “touch point” tool.  However, if slim children are the ultimate goal, maybe the English language version should be named something other than Baby Glutton.

One avenue the First Lady chooses in order to address the sensitive issue of breastfeeding is by pushing for “more flexible workplace rules” for nursing women.  The typically private Michelle is so dedicated to the cause she took America on an intimate journey back in time into the warmth of the Obama baby nursery and spoke in “public about nursing her youngest daughter, Sasha” who, by the way, would be a perfect candidate to test-drive her very own Bebé Glotón.

Bebé Glotón comes with a halter-top adorned with pasty daisies that are “play nipples.” When make believe letdown occurs, the daisies “come undone just as easily as the flaps of a nursing bra.” The tiny plastic gourmand actually “makes sucking noises as it feeds.” Bebé Glotón cries when she wants more milk, burps and makes a sound similar to Wisconsin union workers whining while suckling insatiably at the teat of the American taxpayer.

It appears the end plan is to gently coax new mothers to choose lanolin over bottle liners by dangling tax breaks as a reward for purchasing nursing supplies. As well as being a prospective tax write-off, Bebé Glotón also possesses the latent power to impact both race and social issues.

In fact, former nursing mother and keynote speaker Michelle Obama took the black breastfeeding issue to last year’s 40th annual Congressional Black Caucus (CBC) Foundation Legislative Conference. The First Lady lectured the health-minded caucus saying: “Because it’s important to prevent obesity early, we’re also working to promote breastfeeding, especially in the black community — where 40 percent of our babies never get breastfed at all, even in the first weeks of life, and we know that babies that are breastfed are less likely to be obese as children.”

Someone should inform pro-choice breastfeeding advocate Michelle, as well as the sycophants at the CBC, that fostering conditions that encourage black women to kill the unborn does nothing to cultivate a nurturing attitude among women confronted with strategically-placed abortion clinics on every corner of minority neighborhoods across America.

Nevertheless, for the small percentage of black children that actually make it out of the womb, toy maker Berjuan is sensitive to diversity and markets a Black Bebé Glotón for little girls of color.  If minority children don’t get the Planned Parenthood doll first, playing with Bebé could help teach breastfeeding, and as an added benefit could save the government money by convincing the innately maternal of the future to forgo taxpayer-funded induced abortions.

Dr. Manny Alvarez, managing health editor of FOXNews.com, said although he supports the idea of breastfeeding, he sees how his own daughter plays with dolls and wonders if Bebé Glotón might speed up maternal urges in the little girls who play it.

Let’s not forget thede  diversity-sensitive Heather Has Two Mommies child; she would demand an inclusive Leslie the Lesbian doll.  Leslie wouldn’t come with a nipple halter, but at least the baby-making accessories could assist Mommy in serving up a succulent bird on Thanksgiving.

It appears that, even if only in small increments, Michelle is moving forward in her plan to get the government to put baby formula in the same category as junk food. Recently, a “Let’s Move” policy report cited, “one of the problems mothers may have with breastfeeding starts in the hospital where after birth… many babies are unnecessarily given formula and separated from their mothers, making it harder to start and practice breastfeeding.”

So no matter how and when Bebé Glotón gets here, her calling is clear. Little Bebé can work in conjunction with the First Lady’s pro-breastfeeding initiative, giving diminutive grade school girls the means to rehearse breastfeeding years prior to childbearing age so that when the time comes, the nation’s mammary glands are all practiced up.