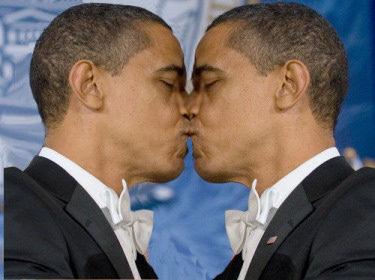 In an effort to raise awareness for Wounded Warriors, former President George W. Bush took a 62-mile Texas mountain bike ride with combat soldiers wounded in Iraq and Afghanistan.  Current President Barack Obama doesn’t have the luxury of leisurely bike rides. Obama has “better things to do,” like laying to rest birth certificate controversies and exposing the “silliness” of  “carnival barkers.”

Lucky for the President the missing birth certificate showed up in time for him to move on to more pressing issues, such as “helping his pal Oprah Winfrey wrap up her syndicated talk show in style.” Three years after being elected, Obama and Michelle chatted with the talk show queen free of the “sideshow” distraction of having to prove the President is eligible to hold the most powerful office in the world

While G.W. spent days bonding with American heroes, Obama did “better stuff.”  Referring to the birther controversy, Obama said “We’ve got big problems to solve, and I’m confident we can solve them, but we’re going to have to focus on them, not on this.”

It appears that one of the more pressing problems Obama is concentrating on is raising a billion dollars’ worth of billboard, television ad, and backup Teleprompter re-election campaign money! Since becoming a re-election candidate, “Obama has embarked on an aggressive inaugural fundraising tour that included three events in Chicago … and six events in two days last week in Los Angeles and San Francisco.”

To hell with $4 a gallon gas prices, the debt ceiling, Middle East wars, unemployment, and a humongous deficit. Such minutia was placed on the back burner as Obama headed to New York City to jam up the Big Apple and attend three Democratic fundraising events. “Obama 2012” galas were “scheduled across midtown Manhattan, including…at the home of financier and former New Jersey Governor Jon Corzine and … at the Waldorf-Astoria hotel.”

“Attendees at both events were asked for the maximum contribution—$35,800, a Democratic official said. The first $5,000 goes to the Obama campaign, with the rest to the Democratic National Committee.”

Continuing with his “better stuff to do” trek to New York, Barack will leave the Waldorf-Astoria and head to a “concert-style event at the Town Hall Theater where, in honor of America’s native son, hip-hop band The Roots will entertain the President and a throng of youthful supporters.

With Obama’s entourage clogging up Park Avenue, G.W Bush and a troop of injured soldiers probably got through a 62-mile bike ride and parked the Cannondales in less time than it took for NYC commuters to make it nine miles by car to College Point, Queens. After two days of raising money and his Presidential profile, “Better things to do” Obama was not “due back at the White House until the wee hours” of the following day.

Far from the glitzy set of Oprah and light years away from Park Avenue, while Obama was busy doing “better things,” G.W. expressed heartfelt appreciation for the bravest among us, saying “As a commander in chief, it was my decision to put them in harm’s way in the first place. I feel a special bond toward them and I want them to know I’ll never forget them.”