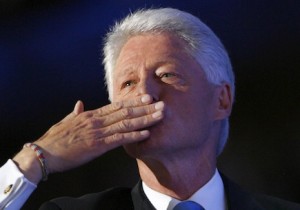 There are many peculiar aspects of the Anthony Weiner uproar. Take for instance Anthony’s hairless pectoral picture with the family photos in the background; Weiner holding up a “Me” sign in front of himself in another picture where a framed picture of an adorable Lhasa Apso can be seen off to one side; and, of course, the crotch shot heard round the world that could eventually land Anthony a cameo on a Fruit of the Loom® commercial where he could dress up as the fruit of his choice.

But by far the strangest aspect of this whole controversy is Slick Willy Clinton’s personal contribution to the fiasco, launching this lurid set of circumstances into new realms of irony.

Requesting that Bill Clinton participate in a marriage ceremony or provide guidance about how to handle a sex scandal is on par with asking Ted Bundy to be a grief counselor for parents of murdered women.  Yet, Anthony Weiner and Huma Abedin, purportedly both intelligent individuals, apparently lack good judgment when seeking role models to pattern themselves after as examples of matrimonial bliss.

The saga started when the Clintons, neither of whom had much discernment when it came to choosing a mate for themselves, “encouraged the match between the Muslim beauty who grew up in Saudi Arabia and the Jewish Democrat from New York City.”  Hopeless romantic Bill claims that for Weiner it was “love at first sight,” a match made in paradise because the couple represented what Weiner wanted “the future of the world to be.”

That world is like the one matchmakers Bill and Hillary inhabit – populated with longsuffering wives who, for political purposes, endure marital betrayal. Not to mention the latent potential in Anthony’s treatment of Huma to affect unstable Muslim/Israeli tensions.

If Weiner is really serious about saving his marriage he should spend some time reflecting. Maybe the congressman should hearken back to July of last year when Bill and Hillary hosted a “sumptuous” pre-wedding poolside buffet at their Washington home in honor of the New York Congressman and his soon-to-be bride, Hillary’s right-hand woman and Bill’s choice for a “second daughter,” Huma Abedin.

As if Clinton romance mediation and the subsequent engagement party weren’t enough, the future Mr. and Mrs. Weiner asked Bill to snap on a clerical collar and preside over their “forsaking all others” nuptials.

Unless presidents are granted special dispensation to marry people, Bill Clinton playing pastor could mean that Huma’s marriage to the guy who asks strange women if they want to see pictures of his “bulge,” officiated by a man who likes to drop his drawers in front of female state employees, may be null and void.

That would be a stroke of luck, because less than one year after the wedding, Weiner was forced to admit that while Huma was straightening the crease in Hillary’s tangerine-colored pantsuit, he was busy texting 220 dirty messages and planning a rendezvous with a female blackjack dealer in Las Vegas.

The only difference between Anthony David and William Jefferson’s situation is that although Huma has sought Hillary’s counsel, she has yet to blame the slimy affair on another “vast right wing conspiracy.”

Thus far the Weiner drama has Clinton involvement in matchmaking, a Clinton-hosted betrothal bash, Bill having to resist the urge to lean in after saying “kiss the bride,” and a scorned Huma asking Hillary Clinton for pointers on how to “stand by your man” versus pounding the sleaze ball into oblivion with the offending iPhone.

Now we find out Weiner, a man who couldn’t harness his impulsive urges, also fails to recognize the insidious nature of the Clinton curse.  Seems the disgraced congressman, after being caught with his pants down, felt compelled to phone up Bill “to apologize” for his vulgar antics. “It wasn’t immediately clear what was said on the call,” but sources claim the “Clintons – who are deeply loyal to Abedin – are distressed by the ‘sexting’ scandal that Weiner immersed his wife in.”

Weiner apologizing to Clinton for being an adulterous cad is as preposterous as Barack Obama apologizing to Saul Alinsky for commencing his career in Chicago as a community organizer.

Isn’t it kind of odd to apologize for the same behavior practiced by the person from whom one seeks forgiveness? Maybe what the New York congressman meant to do was express regret for failing to follow Clinton’s fine example of manipulating words to such a degree that perverted extramarital “sexting” is magically accepted as innocuous banter.

Whatever the conversation, it seems the unscrupulous Clintons are “distressed by the ‘sexting’ scandal” because Weiner embarrassed his wife publicly.  Somewhat like when America was ‘distressed’ by the married cigar aficionado/President of the United States lying about frolicking in the Oval Office with a White House intern?

In the familiar words of renowned author Mark Twain the Clinton/Weiner scenario proves: “Truth is stranger than fiction.” This is a sordid tale of a ruined relationship influenced by the chief cultivator of the Clinton curse. It is a tragic love story where a randy ex-president feigns disappointment over Congressman Anthony Weiner’s marital infidelity and pretends to be offended by the same type of immoral spectacle he himself foisted on America and then did everything he could to dismiss.