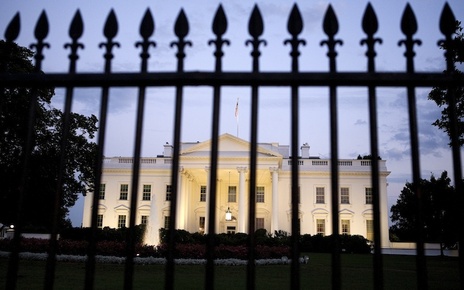 You can imagine homeless man James Dirk Crudup’s confusion when he was detained by the Secret Service after innocently “jumping the fence at the White House” hoping to avail himself of the free perks Obama keeps touting for the poverty-stricken.

Mr. Crudup, carrying all his earthly possessions in his backpack, managed to scale the fence on the north side of the White House, whereupon he and his luggage were both promptly taken into custody.

As a precautionary measure, the seized belongings were closely examined by the Secret Service, DC Fire, and EMS.  Thankfully, “nothing hazardous was found,” although no one mentioned whether or not the knapsack contained an extra pair of the homeless man’s dirty socks.

Reporters were on site during the fracas and some “saw agents …with weapons drawn…one agent could be seen on the roof of the [White House] peering through a pair of binoculars,” but it’s unclear as to whether he was routinely posted there to look out for rodents in the Rose Garden.

As a homeless man, Mr. Crudup epitomizes “the neediest amongst us,” and is a part of society that the President draws on to justify his ever-expanding entitlement system.

With that in mind, in a time of unlimited “fairness” and shared prosperity it makes one wonder why the homeless Mr. Crudup was apprehended at all, especially since it was reported that Barack “Caretaker of the Needy” Obama was in the White House at the time.

Sleeping on sidewalks with newspapers and magazines as a mattress and pillow, the hobo may have happened upon a March 2009 issue of Vogue.  It was way back then in an article entitled “Michelle Obama: the First Lady the World has Waited For” when Andre Leon Talley shared his impression that America’s new First Lady Michelle would be swinging open the White House doors and welcoming in the great unwashed.

Andre said: “It’s been an awfully long time since strangers off the street could wander right into the presidential mansion, but Michelle Obama’s intention is to open up the White House again in a spirit of diversity and inclusion…She is like the neighbor organizing a block party; everyone is invited.”

It may have just taken Mr. Crudup some time to get his nerve up before responding to Mrs. Obama’s open invitation; but after listening to the President talk so much about divvying up wealth and possessions, he finally decided to take her up on her generous offer.

The North Lawn was where James the patriotic nomad was apprehended.  Good choice, because on a hot summer night, Obama would surely understand why a guy without a bathtub would want to take a dip in the versatile fountain Michelle Obama dyes green on St. Patrick’s Day.  In the dog days of summer, why not open to the public the cascading fountain on the front lawn of “The People’s House” which, when free of green food coloring, could certainly double as a pool or bathtub for those less fortunate.

Homelessness is one of the primary reasons Obama maintains that selfish Americans need to learn how to share more. Maybe Crudup took the President literally and thought that if there was anyone who would understand the plight of a bed-less person, Barack Obama would be that man.

The President is the one who keeps reinforcing the idea that some people have much more than they need, which raises the question: Does a family of four really “need” 25 bedrooms that could otherwise provide sleeping quarters for individuals without homes?

Due to the Obamas’ claim of a heartfelt commitment to “sharing the wealth,” Mr. Crudup may have been fully convinced that Obama would welcome a homeless person freshening up and then bunking down in a spare bedroom.

But instead of a dip in the fountain and a snooze in a featherbed, James was led away with “his hands behind his back” and charged with “unlawful entry and contempt of court for violating a stay away order from the White House.”

As the Secret Service, who presently rent a waterfront cottage from Joe Biden, already know, unless you’re a homeless man spending the night curled up on a cot in a jail cell for the crime of taking Barack Obama at his word, nothing is “free” if Democrats are the ones asked to do the sharing.