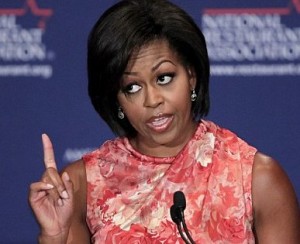 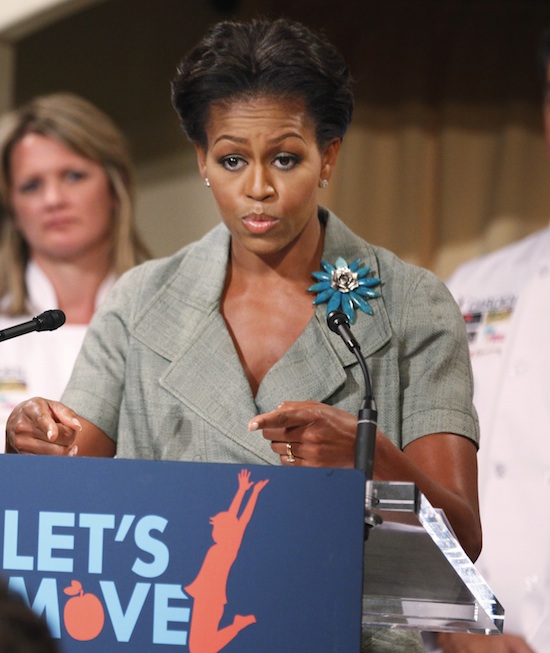 Michelle Obama probably doesn’t like Red Lobster or the Olive Garden. It’s even possible she’s never eaten at either of them, and these days most certainly wouldn’t be caught dead doing so.  In fact, anytime the Obama Foodorama website mentions Michelle’s choice of cuisine, dining establishments, or ingested epicurean delicacies, they have yet to refer to franchise specials such as “Endless Shrimp” or post pictures of the first lady tucking into a “Never Ending Pasta Bowl.”

But lack of firsthand experience hasn’t stopped Mrs. Obama from breathing her healthful hot air all over America’s dinner plate in hopes of scraping our mashed potatoes into the garbage pail and replacing whipped butter and spud heaven with Shiitake mushrooms.

Even though Michelle tends to unabashedly frequent establishments that serve high-end, calorie-rich cuisine, she has nonetheless anointed herself the maven and monitor of healthful eating.  Thus, the first lady’s obvious double standard has delivered yet another initiative whose success is measured by the level of Obama hypocrisy it manages to expose.

When Michelle goes on vacation – which, by the way, is quite frequently – she justifies indulging in limitless portions of whatever she happens to crave. Thanks to a dire fiscal condition exacerbated by Mrs. Obama’s husband’s economic illiteracy, Americans who take staycations and choose to order a huge platter of fried Admiral’s Feast at Red Lobster may soon see the usual connect-the-dots placemats replaced by ones with Michelle’s scowling face, pointing her finger in stern disapproval.

From now on, Michelle Obama will be directly involved in how much Americans can eat at certain restaurants, even though they pay for the food with their own hard-earned money. For future reference, this same bureaucratic babysitting mentality vows to the public that when government pays for their healthcare, rationing will not be an issue.

If Michelle is determining portion control when it’s not costing the government a dime, it’s only a matter of time before Americans are meted out a limited number of pacemakers – after spending two years on a waiting list.

Coincidentally, there is a connection between health care reform, the “breakthrough [anti-French fry] moment” in the restaurant industry, and Michelle posing for “Let’s Move” photos while leaning over patrons slurping Minestrone Soup at Olive Garden, thinking, “Aah, for another plate of Botswana fried fat cakes.”

It seems  “Orlando-based Darden Restaurants [which includes, to name a few, Red Lobster and Olive Garden franchises] is getting a break on part of the health-care reform law requiring companies to significantly raise annual coverage limits for low-cost insurance plans starting next year.”  In exchange for taking the pictures of French fries off the menu at Red Lobster restaurants and replacing popular choices with mealy apples, an Obamacare waiver will be applied to 20% of Darden’s 174,000-person workforce.

The reasoning behind accepting waivers, changing the menu and joining hands with an elitist connoisseur who pushes carrot sticks in franchises while she enjoys Ancho Chile Braised Short Ribs, Hominy & Wild Mushroom Sauté at gourmet restaurants, is that “Obamacare is bad for business.”

Apparently, Darden Restaurants considers it better business to “nudge” menu choices in a predetermined direction by defaulting “all kids’ meals [to] automatically come with a side of fruit or vegetables and eight ounces of 1 percent milk unless an adult requests a substitute.”

Thanks to Mrs. Obama, who allows her two girls to eat fried shrimp baskets and hot fudge sundaes on vacation, America’s children will find that when it’s treat time for them, “French fries and sugar-sweetened beverages will become the exception and not the rule.”

The first lady’s influences is so far-reaching that “The government soon will begin requiring restaurants with 20 or more locations, along with bakeries, grocery stores, convenience stores and coffee chains, to include clear calorie counts on their menus.” Which means the line outside the Magnolia Bakery will be a tad longer if Mrs. Obama spends time reading the side panel of the cupcake box on her next whirlwind New York City candy/pizza/spare rib tasting tour.

According to a report in March, “at least 1,000 companies have already been granted Obamacare waivers – and the legislation hasn’t even been fully implemented.” In the near future, there will be all sorts of businesses, as will Darden Restaurants, who will find out that Obama’s policies are either going to cost them money in healthcare benefits, or cost them money in lost customers. In the freedom department, the Obamacare waiver is destined to turn into a Faustian bargain.

The harsh reality will set in when businesses grapple with Americans refusing to have their portions restricted by certain controlling political figures whose BMI and feminine girth shout hypocrite.  Free people are bound to shake off the socialist shackles of rules and regulations inspired by Obama representatives like the first lady, who busily goes about imposing Draconian restrictions on everyone else’s eating habits while disregarding her own edicts.

If having choices and portions dictated by Michelle Obama in a restaurant that made a deal with the Obamacare devil means eating only what is approved by a woman with a voracious appetite for luxurious cuisine, then it’s just a matter of time before America takes a pass on the “Endless/Never Ending” offerings of whatever Darden Restaurants are serving.

Michelle the Menu Micromanager, Darden Restaurants, and the Nanny State are almost certainly about to find out that if given a choice, Americans will always choose a “Never Ending Bowl” whose portions government diktats, try as they might, will never control: the one filled to the brim and overflowing with freedom.