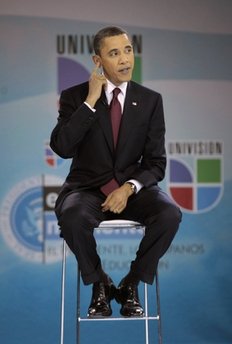 Without saying anything, Barack Obama’s silence speaks louder than all his empty words. The President who likes to define himself as a champion of racial equality and promoter of civility has thus far stood by in silence as liberals attempt to lower the stature of Herman Cain by portraying him as a conservative version of Stepin Fetchit.

By failing to address the prejudicial remarks directed at Herman Cain, the President of the United States is revealing a side of himself that reeks of a form of discriminatory selectiveness that should further discredit his claim to be the purveyor of civility and racial justice.

Who can forget the President’s response to the supposed prejudice leveled against Harvard University professor Henry Louis Gates? Without the benefit of all the information surrounding the incident, Barack Obama rushed before the cameras to publicly condemn Cambridge, Massachusetts police officer Joseph Crowley and insinuated that, due to the color of his skin, Gates was the target of racial profiling and victimized by ‘stupidity’ on the part of law enforcement.

Recently the President spoke at the dedication of the Martin Luther King Jr. Memorial.  It was there that he described Dr. King as “a black preacher with no official rank or title who somehow gave voice to our deepest dreams and our most lasting ideals, a man who stirred our conscience and thereby helped make our union more perfect.”

Yet, while Herman Cain, a man who fits a similar description, is whacked by MSNBC analyst Karen Finney with a verbal billy club and drenched with a fire hose of mean-spirited rhetoric that described him as merely a “Black man who knows his place” – Barack Obama has remained silent.

Where is the President’s usual predictable indignation?  Why no public correction or call for mutual respect?

At the Martin Luther King Memorial dedication, in an attempt to portray himself as a great black leader, Obama didn’t hesitate to put a self-referential spin on the narrative of Dr. King’s life, saying: “Even after rising to prominence, even after winning the Nobel Peace Prize, Dr. King was vilified by many, denounced as a rabble rouser and an agitator, a communist and a radical.”

Barack Obama had the temerity to place himself on the same level as Martin Luther King Jr. and yet, soon after, he stood by while left-wing pundits with zero content of character made racially humiliating comments about Herman Cain that were based solely on the color of his skin.

Thus far, Obama hasn’t said a word.  He has neither corrected, condemned, nor cited mentor Saul Alinsky, whom he quoted at the Martin Luther King Jr. Memorial dedication when he said, “We can’t be discouraged by what is. We’ve got to keep pushing for what ought to be.”

Maybe the President also believes that if a black American such as Herman Cain is a conservative,  he should know his place and that, especially in politics, they are nothing more than a stereotype, a caricature.

When not diminishing the memory of Dr. King by pretending to be much like him, Barack spends some of his off time making the rounds collecting campaign contributions in Hollywood.  In the meantime, liberal comedian David Letterman is on a mission to replace GW Bush with Herman Cain as the newest late-night-created Republican stammering idiot.

If any of the Letterman “Top Ten Signs Herman Cain’s Campaign is in Trouble” were applied to Barack Obama, the left would be picketing the Ed Sullivan Theatre and demanding an Imus-style resignation.  If the butt of Dave’s jokes had been named Henry (as in Professor Henry Gates), Obama would never have stood for Letterman implying that Henry was “less fun-crazy and more crazy-crazy.”

It doesn’t end there either.  In the name of fairness and economic equity the President, who insulted Tea Party activists by referring to them as racists and by using the vulgar sexual slang term “tea baggers” to describe American citizens, has yet to condemn the behavior taking place within the ‘Occupy’ movement.

Which brings us back to Obama’s disingenuous attempt to convince people that he possesses a measure of righteousness that sets him apart from mere mortals.

When it benefited him politically and he wanted to paint the right as impolite, he hosted a civility conference in Tucson Arizona, quoted Scripture, and called for a measure of tolerance he demands for himself but is unwilling to extend to anyone else.

If Hollywood liberals promise to put cash in Obama’s 2012 campaign coffers, he casually overlooks demeaning comments directed toward Herman Cain by asinine comedians because what would otherwise be viewed as racially-tinged humor may instead help advance his cause.

If a group of deadbeat derelicts squat in public parks and proceed to behave like savages, if the signs they carry support “sharing the wealth” and condemn the wealthy, and in time for the next election hold the promise of swaying the general public toward liberal policies, then by saying nothing the President, America’s self-proclaimed purveyor of non-discrimination and equal rights, is condoning rape, racism, and barefaced anti-Semitism.

By exhibiting selective indignation and failing to address the negative racial remarks directed at potential presidential opponents, supporting the nationwide disgrace that is the ‘Occupy’ movement, and choosing to associate with liberal comedians who make Herman Cain the butt of racial jokes, President Barack Obama is proving he doesn’t understand the responsibilities of his role, or understand his place as a leader.