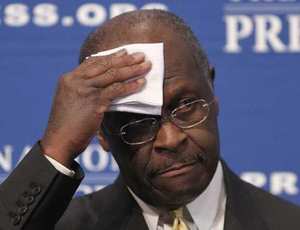 If a conservative threatens the left, or more specifically, if the conservative is a black male who is perceived to have strayed off the Democrat homestead, the left has a method to discipline wanderers that includes dredging up offended women to hurl unsubstantiated accusations against men whose reputation and moral character are generally unscathed.

Based on a “right to privacy” mindset, liberals of both genders rolled their eyes whenever the subject of Clinton’s adulterous behavior was broached.   Yet those who applauded a debauched, cigar-smoking President who had messed around with an intern in the Oval Office suddenly become holier-than-thou when the finger of unconfirmed sexual impropriety points in the direction of a black conservative politician.

The most recent scandalous charge to arise is against Republican presidential nominee frontrunner Herman Cain, whose conservative message, if it catches on in the black community, threatens to shake the foundation of Obama’s African-American base.  The accusation?  Herman supposedly sexually harassed “at least two women in the 1990s.”

The alleged offense took place around the same time that present-day sanctimonious liberals were busy defending Bill Clinton’s cavorting with a woman in a blue Gap dress instead of his wife, the woman in the blue pantsuit.

Now, the very people who waved off Clinton’s misbehavior seem more than willing to believe 20 year-old accusations leveled against a faithful family man by a couple of nameless, faceless, now- middle-aged opportunists.

It must be that the left, desperate to stop the runaway Cain train, felt it was time to pull out of the shadows not one, but two women to accuse Herman Cain of “sexual innuendo and physical gestures,” although the affronted parties did admit Cain’s actions were not “overtly sexual.”

Supposedly, the National Restaurant Association’s CEO’s offending comment was: “You are the same height as my wife.” Based on the benign nature of the statement, Mr. Cain could have asked the duo if they wanted extra cheese on their pizza and the left would have found a way to twist the comment into a sexually insulting remark.

In response to the charge, Cain spokesman J.D. Gordon said the politically liberal press is “dredging up thinly sourced allegations.” Gordon contended that the report includes “unsubstantiated personal attacks” and said that the left, unable to attack Herman Cain’s policies or message, is “casting aspersions on his character and spreading rumors that [when they were made] never stood up to the facts.”

Truth is, what’s going on has nothing to do with the left’s concern for female sensibility, nor is the debate over whether Herman Cain is guilty of making a bawdy comment in the 1990’s (something every adult, regardless of gender or political persuasion, has done).   Instead, the Cain controversy has everything to do with Democrats sending a message to their African-American constituency.

Herman Cain’s accomplishments, life and message are alien to everything conveyed by the left to those trapped within a system that ensures Democrat political power.

Clearly Cain, who boldly claimed he left the “Democrat plantation long ago,” needed an attitude adjustment. Thus, what better time to drag out the political execution playbook and commence with the “high-tech lynching” that Herman Cain predicted would be forthcoming.

The tactic is not a new one, and black politicians should pay heed to the predictable response that takes place when men like Herman Cain point out the futility of liberalism.   When a black conservative gets too close to the truth, the response on the left is to attempt to destroy the character and reputation of anyone who might successfully influence wavering blacks to ideologically stray.

In the Democrat economy, conservative principles, especially those espoused by a wildly successful self-made black leader whose political style is charming and natural, threaten Democrat control over millions of Americans held captive for generations to an entitlement system surrounded on all sides by barbed chicken wire provided compliments of liberal policy.

Black conservatives who refuse to be tamed open the gate and show a way towards freedom for those held in economic and social servitude for generations.   Which is why those notorious for ignoring well-documented sexual impropriety by an undisciplined philanderer like Bill Clinton feign piety over unproven sexual allegations against black conservatives like Clarence Thomas and Herman Cain.

Thus liberal lynchers, well aware that baseless accusations go a long way toward marring the reputation of political opponents, are more than willing to place the rope of false accusations around the neck of any black man refusing to submit to the status quo.

As a means of corralling potentially uncooperative black voters, Democrats publicly prod wandering black conservatives back toward the plantation with unfounded threats and allegations that place the guiltless on the defensive.  Therefore Democrats, who typically stand in solidarity with morally bankrupt liberals, are more than eager to use contrived righteous indignation as a means to execute the type of “high-tech lynching” that every black conservative poised to assume a position of power is eventually destined to endure.