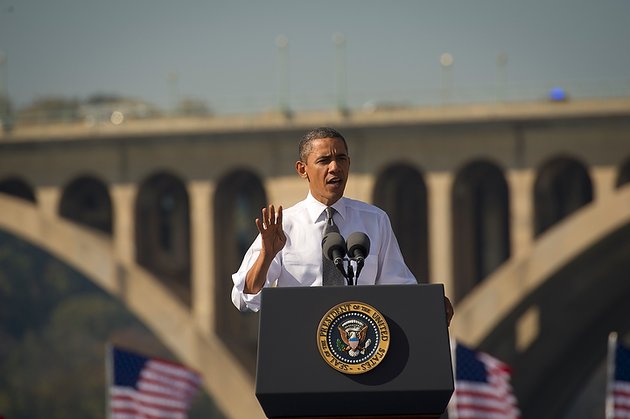 The President does many things that incite ire in a large percentage of the American population. But the most repulsive thing a left-wing liberal ideologue like Barack Obama can do is quote Scripture, take fake photo-op strolls to church, and use a feigned relationship with God to influence those he thinks are easily manipulated.

Here’s the thing — before the President decides to refer to God when promoting unpopular policy, someone should tell the nouveau Bible scholar that on occasion even Satan quoted Scripture.

With that in mind, the President should probably refrain from dragging God to the podium and using personal conversations with the Lord as a billy club to beat into submission the congressional opposition to Stimulus II, better known as a 10-year, $400 billion jobs bill.

Recently, on the D.C. side of the Key Bridge, Barack Obama called “attention to America’s crumbling infrastructure and the need to put more construction workers back on the job.”

The President, whose political philosophy indicates that, as a rule, he can ignore Judeo-Christian values, “criticized House Republicans for ignoring his legislation, while approving a measure that reaffirms ‘In God We Trust’ [remain] the national motto.”

With the bridge in the background, Barack Obama proceeded with promoting his legislation by informing the bill’s opponents that keeping ‘In God We Trust’ as the national motto, while commendable, does not put “people back to work.”  Then, speaking on behalf of God, the sporadically devout Mr. Obama said “I trust in God, but God wants to see us help ourselves by putting people back to work.”

If Barack Obama thinks jobs are God’s priority and that Yahweh is on his side, he’s sadly mistaken.   God is much less concerned with repairing bridges and blacktopping highways than He is with the dignity and sanctity of life, neither of which the pro-choice President defends.

History has proven that a personal relationship with God infuses leaders with Mosaic boldness to instruct nations what God would have us to do. The danger occurs when a man like Barack Obama comes down from the mountain and then joins those who hammer out and dance around the Golden Calf of government funding and unfettered access to partial-birth abortion.

Barack Obama maintains “God wants to see us help ourselves by putting people back to work,” proving the man is confused. Because the Biblical tenet “The one who is unwilling to work shall not eat,” is a principle America’s ‘share the wealth’ president faithfully rejects.

Truth is, rather than focusing on self, anyone who truly ‘knows’ God defends the defenseless; protects the innocent; and helps those who can’t help themselves.

Obama cannot vote against legislation that provides warmth, hydration and oxygen to infants born alive in botched abortions and then tell America what God, whose hand the Bible says placed and “knit us together in our mother’s womb,” wants us to do.

Before installing himself as an oracle for the Almighty, establishing the precedent that all life issues forth from God and that God alone should dictate when it ends is a priority that should trump finding a way to get people in reflective vests a place to stand at night on roads in disrepair.

Maybe the most pro-choice president in the history of United States should rethink the contradiction posed by claiming that God supports fixing pot holes and replacing expansion joints on bridges and roads that are traveled by women visiting abortion clinics funded with government monies.

Nonetheless, Obama’s God/jobs comment was so out of character, it cried out for further explanation.

At a press briefing, when asked to expound on whether the President was implying God stands in solidarity with him on job creation, White House Press Secretary Jay Carney attempted to explain that Obama was simply “trying to make the point that ‘we have it within our capacity to do the things to help the American people'” — most of whom, if not for Obama making it literally impossible to move forward, would be perfectly capable of helping themselves.

Carney arrogantly corrected those who questioned the connection between the jobs bill and the Deity, citing as Scripture a phrase that is nowhere to be found in the Bible, saying “I believe the phrase from the Bible is ‘The Lord helps those who help themselves.'”

No, Jay!  Scripture does not say “God helps those who help themselves,” but it does convey the all-encompassing message that God expects His people to help those in the womb who, thanks to Jesus-and-Me job-creator Barack Obama, are destined for destruction and cannot help themselves.

Therefore, the President should be cautious when mentioning God to promote ‘shovel ready’ jobs while millions of unborn children are being aborted and shoveled into unmarked graves with full liberal approval. Before lackadaisically telling America what God ‘wants to see us’ do, maybe Barack Obama should reflect awhile on whether God ‘wants to see’ him legislatively assist in the murder of the unborn.

If the President of the United States seeks divine blessings on the national economy, rather than manipulating Congress to finance gassing up asphalt trucks with 400 billion dollars’ worth of diesel fuel, God would undoubtedly prefer that Obama spend his time “burdening the original decisions” of pro-choice women and doing the Lord’s work by putting an end to the tragedy of legalized abortion.