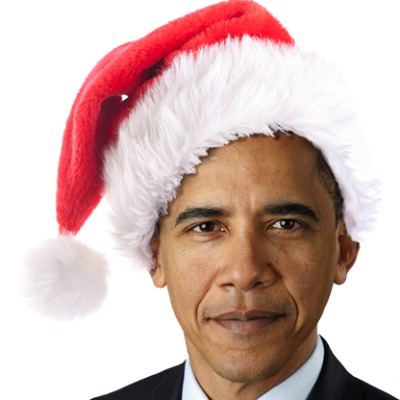 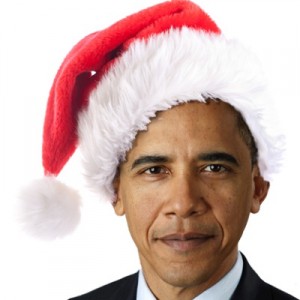 It’s beginning to look a lot like…Campaign Season…everywhere you go. As a matter of fact, wasn’t it during the 2008 campaign that Michelle Obama, who has since allegedly spent $10 million on vacations, attempted to relate to the little people by proudly declaring, “I’m more of a Target shopper?”

With Obama’s poll numbers in a slump and after being criticized for extravagant living, early this past fall an incognito Michelle donned a Nike baseball cap, sunglasses and a floral-print button-down shirt and snuck into Target for a thrifty shopping expedition to buy various undisclosed items, as well as kibbles, bits and chew toys for the family dog.

Now here we are just a few months later and Bo must have devoured that economy-sized bag of pig’s ears, because for lack of anyone else to hang out with, common man/Christmas bargain hunter President Obama, virtually unrecognizable in wing-tipped shoes and white shirt and tie, grabbed his best friend and ventured out into middle-class America to indulge in some retail therapy.

That’s right — accompanied by an inconspicuous entourage of Secret Service and security, trillion-dollar big spender Barack took a break from fighting with Republicans over the payroll tax cut, and in a bulletproof armor-plated vehicle nicknamed ‘The Beast,’ rode all the way to a local big box store mall.

There, BO and First Dog Bo moseyed over to the local PetSmart where Obama bought his beloved Portuguese water dog a $24.99 chew toy to keep him occupied for the 10-hour trip to Hawaii, if Barack takes him along.

Animal-friendly PetSmart allows shoppers to take their pets inside the store. Uninterested in picking out Michelle Obama-approved organic dog treats, Bo chose instead to frolic with another dog while Mr. Obama shook hands with shoppers who were probably salivating more than the dogs.

During the impromptu shopping trip, the Obama ‘Throw the Dog a Bone’ tab, in conjunction with his “What Does $40 Mean to You?” payroll tax savings campaign, coincidentally came in just under $40, indicating the jaunt wasn’t a break from Obama’s political chicanery after all, as it proved what $40 means to him.

Unsure when or if he’ll be shimmying down the chimney in Hawaii, Obama’s Christmas caravan continued on to Best Buy, where he did some last-minute yuletide shopping for Sasha and Malia who, as of 2008, were among a small group of Americans still unconvinced that Dad was America’s Santa Claus.

Obama bought a ‘Let’s Move’-friendly Nintendo Wii “Just Dance 3” video game that allows four players to dance together at the same time.  That way when he does get to Oahu, he can join the party already in progress. Although arriving a little late, the thoughtful effort on Dad’s part could kick-start even more holiday merry-making with “45 tracks from multiple genres and popular artists including today’s hottest hits.”

Both Michelle and Barack view themselves as experienced dancers, even though Barack was seen doing exactly the same dance step with children in Mumbai, India, with Ellen DeGeneres, and with Latin pop star/hotsy totsy Thalia.  Vowing not to leave Washington until the tax cut is extended, Obama can always kill some time trying out new dance moves and practicing cutting the new rug in the Oval Office before springing “Just Dance 3” on the girls in Hawaii.

Referring to neither Ellen nor Thalia and just to make doubly sure he was buying the right one, Mr. Obama asked the Best Buy clerk whether the “Just Dance 3” he was purchasing was “the hot one.” Then, while paying for the game, the President whose entire economic policy hinges on insurmountable debt and crippling credit joked about whether hiscredit card would be declined.

Thankfully, POTUS’ card slid through just fine and was approved for dog bones and dance games, leaving just enough credit on the card for Mr. Obama to join the folks for a humble slice at a nearby pizzeria and to shop at Target for dog bones with Michelle after the first of the year.

After bagging the goods, Mr. Obama quipped to reporters in Northern Virginia that they’d never get a picture of him playing the game because he gets an “F every time.” With those words in mind and with November 2012 less than a year away, maybe next Christmas America will be able to say “Yes, there really is a Santa Claus.”