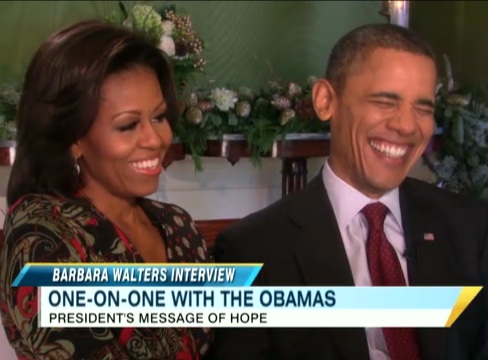 The 2012 campaign officially began on the ABC News program 20/20, where Barbara Walters ended 2011 with a tour that began with a walk through a Christmas tree-festooned White House and finished up in a room where Michelle and Barry were squeezed ever-so-tightly into what looked like an oversized club chair, holding hands, and sharing deep thoughts and family secrets.

Ms. Walters even asked Michelle who, if she were reincarnated, would she want to come back as?  Mrs. Obama chose the family dog Bo, of PetSmart fame and the DC-to-Oahu/Oahu-to-DC controversy. Referring to the Obama family’s black and white Portuguese water dog, Michelle, who according to middle-class American standards has it pretty damned good, didn’t elaborate on what she meant when she said, “He’s got a great life. He’s got it good.”

In a question that was asked prior to the PetSmart brouhaha, the President pled the fifth to Walters’ query as to whether “Bo was flown to Hawaii for the Obamas’ family vacation.” Offering neither a yes nor a no, the President declined, saying with a smile, “You know, Barbara, I’m going to pass on this one.”

Obama’s elusiveness added additional fodder to the ongoing mystery of the doggie doppelganger. However, Barack’s non-answer did provide a smooth segue into revelations about his struggles with honesty.  Obama admitted he has a propensity to lie, but claimed it was only when the “truth would hurt other people,” which may be a lie.  The truth is, whenever Obama is speaking, he’s probably lying about something.

Supposedly, the President’s goal is to avoid hurting people with truth. Truths like: thanks to him, every American citizen from one minute-old to 100 years-old owes about $50,000 each, and the fact that he hasn’t a clue what the hell he’s doing? Those kinds of truths?

The President did ’fess up that, unlike Honest Abe, on occasion he does lack veracity, saying, “Usually, the only time I lie is very personal interactions with family members, who you say, ‘you look great,’ and they don’t. ‘Wonderful dress…’ Uh, not so much.”

The first lady admitted to Barbara that she also lies, but only when “truth [is] not helpful.” Michelle did not expound on whose standards this ‘helpfulness’ is based.  For instance, is it or is it not “helpful” for the American people to know whether it’s true that Michelle’s three-year taxpayer funded vacation bill is really $10 million?

The couple did not share how they maneuver through a marriage while both are afflicted with dueling cases of undiagnosed pseudologia fantastica. Yet, on the cusp of their 20th wedding anniversary, Barbara did ask the couple to use three words to describe one another. Surprisingly, neither one of them chose ‘honest,’ ‘truthful,’ or ‘industrious.’

Barack did describe his wife as “Beautiful, smart and funny.” However, when it came to the “biggest pet peeve” he had concerning his bride, the President claimed he didn’t have one, demonstrating how he avoids hurting feelings whenever he says “You look great.”

The first lady offered attributes such as “Smart, sportsman, and father” when describing her husband, but chose to omit the aforementioned ‘lazy’ and ‘liar.’  One comment to which the usually warmhearted and demonstrative Obama responded with ‘Spock-like’ coolness was when Michelle confessed that, as far as her “pet peeves” about him go, her “list is too long.”

Barack said that, besides people being shocked to find out he struggles with candor, he believes “the biggest misconception about him is that he is ‘Spock-like’ – that is to say, ‘very analytical.’” Obama said “People who know me know that I am a softie. I mean, stuff can choke me up very easily.”

Also during the interview, Mrs. Obama said that when not being fitted for haute couture or jet-setting around the globe, she found herself slipping “pretty low” on her list because she was “so busy caring for everyone else.” So, America’s First Lady has resolved to put herself first, which apparently includes taking as many vacations as she can  – a decision her self-professed lazy, lying, occasionally robotic husband stuck back in Washington DC would likely never admit he’s secretly thrilled about.

That aside, the President did choose to openly reveal the pressure he feels as president, saying that “The challenge for me is that in this job I think a lot of times the press or how you come off on TV people want you to be very demonstrative in your emotions.” In fairness toward the President’s perceived inability to emote, America should understand that reading directly from a Teleprompter could cause warm people to unfairly come off as cold.

When asked what trait he most “deplored” in himself, an unperturbed Obama responded, “Laziness. Nothing frustrates me more than when people aren’t doing their jobs…if I get lazy, then I get mad at myself.” Which may be why he didn’t pursue playing a musical instrument like other presidents such as renowned saxophonist Bill Clinton, or try to perfect his Spanish like NYC Mayor Michael Bloomberg, aka @Elbloombito.

After sharing intimate family details and lifetime regrets with Barbara Walters and 20/20, the President alluded to Republicans doing what the first lady claims she disdains, which is exhibiting “unwilling[ness] to compromise.” And although Barack Obama did imply that he considers lying, slothfulness, and the inability to express human emotion somewhat normal, he was resolute in describing Washington DC, and his political adversaries who reside there, as “dysfunctional.”