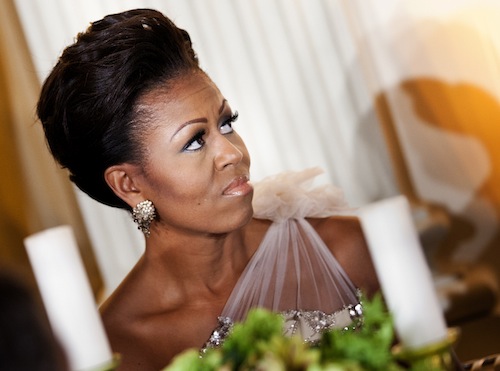 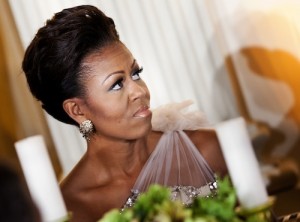 In recent weeks Mrs. Obama might as well be crisscrossing the United States of America with broccoli in one hand and a five-pound hand weight in the other, with carrot tops sticking out of her back pocket and half a cantaloupe for a hat.  She’s done pushups with Ellen DeGeneres, exercised with Olympic Gold Medalist Dominique Dawes, sack-raced with comedian Jimmy Fallon, exercised with Desmond Tutu, and even done the platypus walk at Disney World.  And that’s just for starters.

She’s appeared on the cover of every magazine, from over-40 women’s magazine More to Prevention, where she’s touted the benefits of cutting fat and eating vegetables, and has done so to everyone from Jay Leno on the Tonight Show to a group of toddlers in New Orleans.  If you listen to what she says, the woman certainly sounds committed.  But commitment involves more than words, and when Michelle Obama’s food directives are compared to the food choices and menu selections she makes for herself and her dinner guests, there’s oftentimes a super-sized portion of deceit.

A perfect example of that is the Obama-hosted White House Governor’s Dinner, where healthy eating submitted to caloric obscenity. Visiting Washington DC for the National Governor’s Association winter meeting, a group of state heavyweights dined compliments of the Obamas the night before the event.

Now, either the First Lady had nothing to say about the menu (which is doubtful), was attempting to ‘kill’ Republican governors (with kindness of course), or because of Sunday being a day of rest and all, passed on the veggie burgers and threw caution to the wind.

Due to prior commitments, Governor Jan Brewer skipped the social gathering, and so with Obama’s favorite governor in absentia the dinner probably had less to do with covert sabotage and more to do with an impressive array of double standards.  Reminiscent of Super Bowl Party celebrations, replete with huge bowls of German potato salad and oily deep dish pizza, the menu for the festivities in the State Dining Room attempted to redeem itself by claiming to be comprised of “regionally sourced” American favorites.

On the menu was a gigundo hunk of fat-laden rib eye steak, which may have been featured to accommodate the President, who kept telling his guests, “Tonight it’s about having some fun.  I want everybody to have a great time tonight.”

In addition to the rib eye steak, also served up in style were salads made from greens harvested from Mrs. Obama’s year-round-always-in-bloom Kitchen Garden.  The main course included no-cream creamed spinach and all-American healthy favorite Maryland crab macaroni and cheese, all topped off by an artery-clogging dessert of pear tart a la mode.  Don’t tell me this wasn’t a direct threat to portly New Jersey Governor Chris Christie’s health.

And oh yes, the 2,550 calorie Gastronomical Governors’ Xanadu was washed down by an array of traditional American white wines.

The governors were there because they were slated to meet the following day to talk policy in separate meetings with the President and the First Lady.  One would guess that Michelle’s policy discussions have to do with healthy eating initiatives and governmental diktats determining portion sizes and ingredients in public school lunches and in private restaurants.  What was Michelle planning to do, use the prior night’s dinner as an object lesson in what not to eat?

Feeling jovial, party-animal Obama, who’s been known to organize a Conga line or two himself, entertained the awkward mix of Republican and Democrat guests by sharing a story that could shed some light on the real reason why, when it comes to food, Michelle Obama habitually says one thing and eats another.

Transforming the Governor’s Dinner into the joke portion of the Gridiron dinner he plans not to attend, “The President told a story about President Andrew Jackson’s inauguration, when crowds flooded into the historic rooms, threatening to ‘crush’ the new Commander in Chief.”

Obama, who just doesn’t strike one as the comedic type, got the group to chuckle when he said, “As things started getting out of hand, the staff decided to pass barrels of ice cream and whiskey out the window to get people out on the lawn, so they wouldn’t cause damage and break the chandeliers and the furniture.”

It wasn’t reported whether there was any chandelier-swinging at the Governor’s Dinner, but furniture damage could have been an unintended consequence of a high-calorie feast. Nonetheless, Obama said, “So I just want you to know, in case things get rowdy, we also have a barrel standing by.”
Ah ha! In the end, it may not be hypocrisy at all. The Black Star ice wine and no-cream creamed spinach, grown on the same lawn that was showered with barrels of whiskey and frozen creamery in the volatile Jacksonian era, could have been served in the interest of presidential safety.

Standby barrels of booze and butterfat may explain what is falsely perceived as duplicity. The truth is, especially in an election year, 2,550-calorie dinner parties may merely be an effort on the part of culinary control freak Michelle Obama to quell the irritation of perturbed moderate Democrats and sedate Republican gubernatorial critics with slabs of well-marbled beef, vats of crab mac and cheese, and barrels of wine.