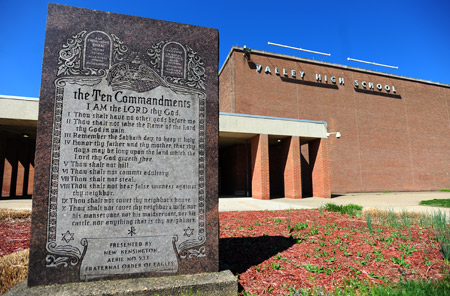 It seems as though a Madison, Wisconsin-based atheist group calling themselves the Freedom from Religion Foundation has nothing better to do with the time their freedom buys them than travel around America sniffing out religion wherever it resides.

Some of the notable “freethinkers (atheists, agnostics and skeptics)” gracing the foundation’s board include “[u]nabashed atheist, not afraid of burning in hell,” media commentator, and former Joffrey ballet dancer Ron Reagan Jr.” and the always eclectic Dr. Mike Newdow, Esq., who carved a reputation for himself by protecting his born-again Christian daughter from having to say “under God” when reciting the Pledge of Allegiance.

The group’s base of operation is located more than 800 miles from their latest target.  But distance hasn’t stopped the foundation from penning a warning letter to the Valley School District in New Kensington, Pennsylvania addressing the constitutional outrage of a stone monument of the Ten Commandments on school grounds.  FFRF has threatened a lawsuit if the offensive carving isn’t promptly carted away from the public arena.

For years, the Ten Commandments testament in question resided outside Valley High School without complaint or controversy.  But that was then, and this is now — community acceptance, the monument’s longevity, and school appreciation of a historical tribute to ancient principles no longer apply.

The foundation admitted that the “monument was brought to their attention by a student who did not attend Valley High School.”  And so, in the spirit of open-mindedness, a student who doesn’t attend Valley High passing by in his or her Mini Cooper felt moved to sound the atheism alarm.  A “Report a Church/State Violation” form was submitted on the Freedom from Religion Foundation website alerting the foundation to a possible violation, to which they responded with a fervor bordering on religious.

Let’s face it: the Pennsylvania school district should never have allowed words attributed to the “Lord thy God” to suggest that the kiddies avoid cursing, stealing, and killing.  Moreover, what right does anyone have to impose Judeo-Christian tenets — that is, outdated concepts — on children like respecting parents, speaking well of others, and avoiding longing after what belongs to someone else?

Valley School District Superintendent Dr. George Batterson explained, “This is just a monument that was donated by the Fraternal Order of the Eagles way back in 1957 and we see this having more historical significance than religious.”

Now there’s a valiant cause for the Freedom from Religion Foundation to take up.  Forget the Pilgrims coming to America for freedom of religion.  How about if Ron Reagan, Jr. slips off his tights for a spell and leads the charge for change?  The group could make the argument that any historical reference to religion, regardless of how valid or integral to the truth of history, should henceforth and in perpetuity also be prohibited from mention in public school curricula.

Discussing the monument in question, Dr. Batterson waxed apologetic, saying, “The one thing that’s very, very important that people realize is that there is no way that our school district is trying to promote or impose religion on our students.”

Well thank God, because God forbid Valley High “promote or impose” morality on children whose exposure should be reserved exclusively for suitable subject matter, such as how to properly apply a condom.

Moreover, even God knows that passing a replica of the Ten Commandments while entering or leaving school grounds encroaches upon valuable brain space needed to commit to memory vocabulary words like “transgender reassignment” and how to find the shortest route from homeroom to the Allegheny Reproductive Health Clinic.