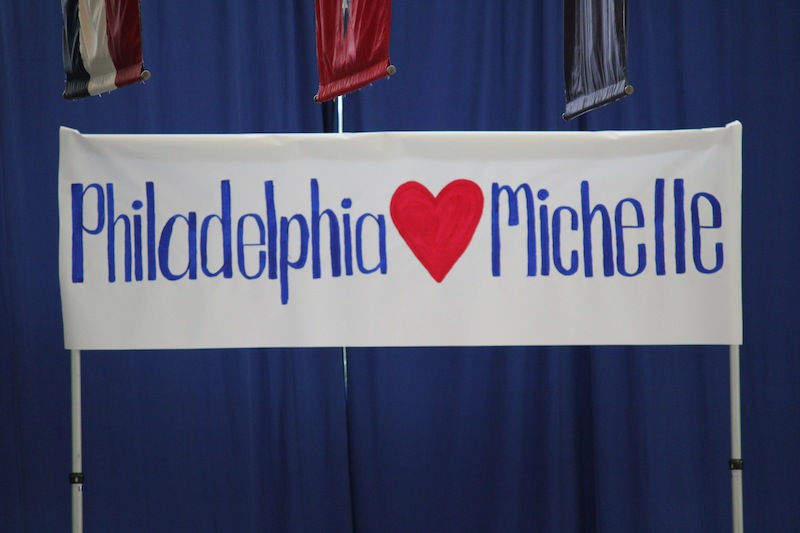 Over the past few weeks, Barack Obama probably spent a lot of time fretting over whether or not, at his recent “Barack on Broadway” fundraiser, he should reprise the endlessly rehearsed first line of “Let’s Stay Together” by Al Green or, in light of his faltering popularity, choose “What Becomes of the Brokenhearted?” by Jimmy Ruffin.

Meanwhile, between teaching the joys of organic gardening and gracing David Letterman’s Top 10 segment with her horticultural expertise, “American Grown” Michelle found time to squeeze in a rally at the National Constitution Center on Independence Mall in the City of Brotherly Love.

Mrs. Obama touched down in Philly to inspire and motivate Obama enthusiasts.  Her goal?  On Election Day, it’s up to the ground troops to carry the critical state of Pennsylvania, or else!

Let’s face it; who better than the wife of a community organizer to urge workers to make sure that illegal aliens, Mickey Mouse, and dead grandmas make it to the polls in Philly, and, more importantly, that the New Black Panthers are outfitted with an ample supply of white-cracker-scattering billy clubs?

Exhorting the energetic crowd, Michelle emphatically stressed that undecided voters are key to Obama’s reelection and that the wary can and should be wooed back because it was “Barack [who] kept his promise to bring our troops back from Iraq.”  Further, she asked them to remind the undecided that our “brave men and women brought to justice the man behind the 9/11 attacks.”

Mrs. Obama explained that help was needed to give her and her husband a “chance to finish what [they] started.”  What the first lady didn’t clarify was what exactly it was that she started, nor did she reveal how Barack Obama planned to “finish off” what it is that he had started.

Candidly acknowledging the prospect of a close race ahead, Michelle warned that Barack “can’t do [it] alone.”  Doesn’t Mrs. Obama know that her “We Can’t Wait” husband has already demonstrated a preference to do it alone?

Nevertheless, the first lady took the time to tout the passage of the president’s still unpopular health care reform bill, cited what she defined as an improving economy, and lauded the withdrawal of troops in Iraq — all examples of what Michelle considers highlights on Obama’s glowing list of first-term achievements.

Beseeching the crowd, Michelle then said, “[M]ake sure that people know that all of this — and so much more — is at stake this November.”

Among the ‘accomplishments’ she chose to ignore were the nation’s continued high unemployment rate, slow growth, ballooning debt, and the ever-growing number of military fatalities in Afghanistan, to name just a few.

Also omitted was Barack’s talent for belting out jazzy Motown tunes, his capacity to advise the nation on the value of thingamajigs, his ability to befriend fellow rock stars like Jon Bon Jovi, his skill for flip-flopping on social issues, and his penchant for slipping the name “George” in whenever he’s passing blame.

According to America’s first lady, “[i]n the end, it all boils down to one simple question: Will we continue the change we’ve begun and the progress we’ve made, or will we allow everything we’ve fought for to just slip away?”  As for “continu[ing] the change” Obama began, one can only hope not.  And as for allowing “everything [the president] fought for to just slip away,” please, God, let it be so.

Michelle went on to contend that the president deserves re-election based on the fact that he has “demonstrated that he will fight for his beliefs” — a nasty habit of Obama’s that a majority of Americans wish he would break.

In closing, Mrs. Obama declared, “When we need a leader to make the hard decisions to keep this country moving forward, you know you can count on my husband, your president, because that is what he has been doing every single day in the Oval Office as President of the United States.”

Then again, on the many, many other days that he’s not in the Oval Office, Barack Obama can also be found making hard decisions on the golf course, body-surfing in Hawaii, moving forward on the basketball court, whispering on open mikes to Russian presidents, and exchanging fashion tips with Sarah Jessica Parker and her husband Ferris Bueller at campaign fundraisers held in their home.

Finishing up her 20-minute speech with a call to action, Michelle poignantly said, “I have one last question to ask you. Are you in?”  Which raises yet another, possibly more important question as Election Day draws near: by “are you in,” was the first lady referring to Americans being “in” foreclosure, “in” bankruptcy court, or “in” line at the employment office?