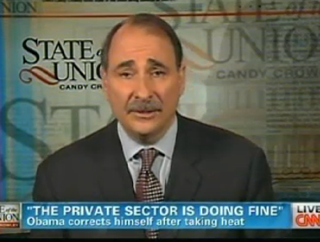 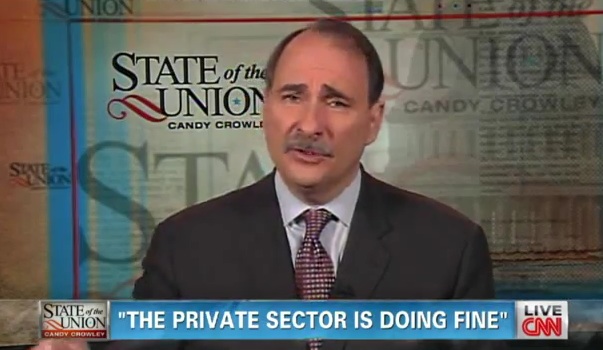 David Axelrod took to the Sunday morning airwaves to clarify the ‘Hope and Ever Changing’ President’s assessment that the economy-is-fine and not-so-fine statements.  Hearing Barack Obama’s top campaign strategist attempt to do damage control is always painful.  Yet taking the time to listen to David Axelrod does explain why Obama is constantly “evolving” – it’s because neither he nor his closest advisors know what the hell they’re talking about.

Then again, there is the possibility that the Obama 2012 reelection campaign may have been floating a campaign “private sector is doing fine” stump speech trial balloon when Barack Obama said the following:

We’ve created 4.3 million jobs over the past 27 months. The private sector is doing fine. Where we’re seeing weaknesses in our economy have to do with state and local government, oftentimes cuts initiated by, you know, governors or mayors who are not getting the kind of help that they have in the past from the federal government and who don’t have the same kind of flexibility of the federal government in dealing with fewer revenues coming in.

After Barack Obama emphatically declared that we/he created 4.3 million jobs in the private sector and that tax-supported state and local governments suffer because tax breaks bring in “fewer revenues,” he was later forced to admit that it’s “absolutely clear” that the same economy that was “doing fine” just a few hours prior is really “not doing fine.”

While acquiescing to the obvious, Barack Obama again asserted that in the private sector there has been “good momentum.” However — and here is where the Axelrod stump speech trial balloon may have been floated — the President did intimate that if the Republican Congress would stop refusing to raise taxes, more revenue would be generated and the federal government could then help state and local government create union jobs, which they believe, in turn, would bolster the economy.

Backing Obama up and acting as an advocate/mouthpiece for a regular presidential gaffe machine, a rattled David Axelrod appeared on the Sunday morning show circuit and attempted to sound intelligent as he pushed the talking point that the “country needs to ‘accelerate’ job creation in the private sector — by hiring more teachers, police and firefighters.”

That’s right — according to David Axelrod, key campaign advisor to the Obama reelection campaign, the cure for a lagging economy is to try to make apples grow by planting orange trees.

Invited to appear on two Sunday morning shows to explain the president’s face-saving walk-back, Axelrod said on CNN’s State of the Union with Candy Crowley that “The private sector, we need to accelerate job creation in the private sector.”  He then followed up that statement by referencing a “proposed small business tax credit and refinancing program as ways to help the private sector.”

For much of the CNN segment on the President’s fine-not-so-fine blooper, Obama’s chief campaign strategist continued to frenetically push the hire-public-to-help-the-private-sector line.  Frustrated host Candy Crowley tried repeatedly to get Mr. Axelrod to answer her original question, but the effort failed miserably.

Clearly, David Axelrod’s idea of addressing the President’s verbal error was to first mildly concede that the evil private sector is still struggling a bit. But after he did, Axelrod also felt compelled to cite for a second time Obama’s claim that “we created” a private-sector number of 4.3 million jobs, stressing once again that while the private sector did grow, the sector the government mismanages lost a half-million teaching jobs.

Therefore, according to David Axelrod, that is why the private sector is “doing far better than the public sector,” and is also why the Obama mouthpiece, who was supposedly invited to be a guest on news/talk shows to clarify Barack Obama’s misstatement, explained the President’s error by continuing to insist that the private sector’s momentum would only continue to improve if more public sector employees were hired.

If the predictable philosophy of ‘fairness’ were to be applied to this public/private sector controversy, one would think the President was attempting to level the playing field by finding a way, regardless of budgetary restrictions, to justify adding 4.3 million teacher, firefighter and law enforcement jobs to the public sector.

So, in other words, the Obama administration’s answer to fixing the country’s fiscal woes is to pour gasoline on a raging fire of high-cost, unsustainable, poorly-managed public sector jobs in hopes that reigniting a public-sector forest fire will somehow miraculously put out a brush fire in the private sector.  And Axelrod, who confused the embarrassing issue even more, had the audacity to accuse Romney’s “prescription for a stronger economy” of being proof that the presumptive Republican nominee is “living on a different planet?”

Immediately following Axelrod’s not-so-fine appearances on CNN and ABC, the Romney campaign responded by rightly observing that “When even your own chief strategist can’t defend your comments, it indicates that your assessment of the economy might be wrong.”  This is especially true if that strategist is part of a team of advisors who counsel the president on how to best articulate economic policy.

Most would agree that “awkward” is a polite way to describe David Axelrod and Barack Obama’s nonsensical argument that the private sector, which is doing better than the public sector, needs the poorly-performing public sector to help a private sector that is supposedly already improving without their help.