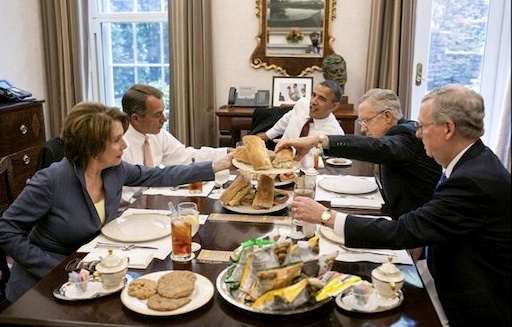 Barack Obama had the audacity to run for president, the temerity to convince America that he was the answer to all our problems, and the gall to actually do what he said he would do, which was to “fundamentally transform America,” and Senate Minority Leader Mitch McConnell (R-KY) is doing what? Why, he’s whining that Obamacare will be hard to undo.

Mitch McConnell said, “If you thought it was a good idea for the federal government to go in this direction, I’d say the odds are still on your side. Because it’s a lot harder to undo something than it is to stop it in the first place.”  Well that’s an insightful observation, seeing as how the efforts to stop it when it was being rammed through were anemic at best.

Speaking to a group of people at a hospital in Elizabethtown, Kentucky, the Senate Minority Leader told a group of 50 that repealing health care reform is on his “to-do list,” but the odds are against repealing it.

George Washington, who knew what it was to have the odds against him, would have likely reminded McConnell that the effort should have been stronger initially, because as Washington himself said, “Experience teaches us that it is much easier to prevent an enemy from posting themselves than it is to dislodge them after they have got possession.”

After the Chief Justice of the highest court in the land genuflected before political pressure and held the Constitution while Chicago’s most successful thug, Barack Obama, set it on fire, McConnell must feel it’s his patriotic duty to make the rounds at Kentucky hospitals explaining what’s next for the nation.  McConnell owes us an explanation, especially since America lost its freedom while he and Speaker of the House John Boehner were busy eating hoagies and fraternizing with the enemy.

Instead of bemoaning the difficulty of unraveling 2,000 pages of a health care law that contains the recipe to unravel freedom, Mitch should be explaining the plans of conservative freedom fighters to defeat a leviathan and liberate the American people from bureaucratic tyranny.

But the House Minority Leader probably spent his time in Elizabethtown timidly explaining how another pseudo-conservative, Supreme Court Chief Justice John Roberts, decided that it’s legal to punish Americans with taxes for not obeying King Barack the First’s dictates. Moreover, while speaking to the hospital workers McConnell probably also explained how the bill is only constitutional if it is a ‘tax,’ but that Democrats will continue to swear it isn’t a tax (which essentially nullifies the constitutionality Roberts handed them), and that the Republicans are powerless to do anything about it.

Nonetheless, for a better understanding of how this particular type of constitutional creativity works, just think about how “privacy” justifies “abortion” and then interchange “mandated penalty” with “tax” in pretty much the same way “choice” replaces the word “murder,” and that should clarify things.

The lackluster McConnell pledged to stunned hospital workers still reeling from a decision that makes no sense yet will impact them greatly, that he’ll do whatever he can to repeal the law.  However, he did warn them that in Washington DC some things are even harder than stopping a progressive Marxist socialist from chaining a nation to an oppressive government, but promised that if given control of the Senate in the upcoming election, he’ll give it one helluva of a try.

On a long shot, McConnell said that if Republicans do gain control of the Senate and he becomes the Majority Leader, he would use what Republicans called “unusual and hyper partisan” budget reconciliation rules to repeal the law, ironically a tactic used in 2010 by the Democrats when they passed the healthcare bill.  Based on the past two years’ performance by the Republican-controlled Congress, hedging bets that a Republican-controlled Senate would have the guts to solve the problem does not stir confidence in the hearts of concerned citizens.

Lacking conviction and the type of unshakable confidence that would reassure voters the Republicans have a plan, Mitch McConnell said that “I’m confident [voters are] going to give us the votes to repeal it,” which means the Republican House Majority Leader’s only battle plan to liberate the nation from despotism is to depend on the American people to rescue the Senate.

Prophetically speaking of a time such as this, George Washington best described the insipid attitude of Mitch McConnell and the rest of the politicians who should be on fire with the desire to preserve our freedom and loading their muskets with a sound policy plan when he said, “The marvel of all history is the patience with which men and women submit to burdens unnecessarily laid upon them by their governments.”

In other words, this 4th of July, the Republican plan to address the Constitutional crisis and impending disaster that is Obamacare could best be described as similar to a fire department standing by and watching a building burn while waiting for the people inside to hand them a garden hose.