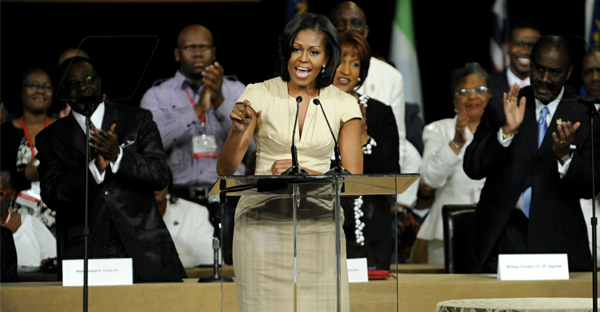 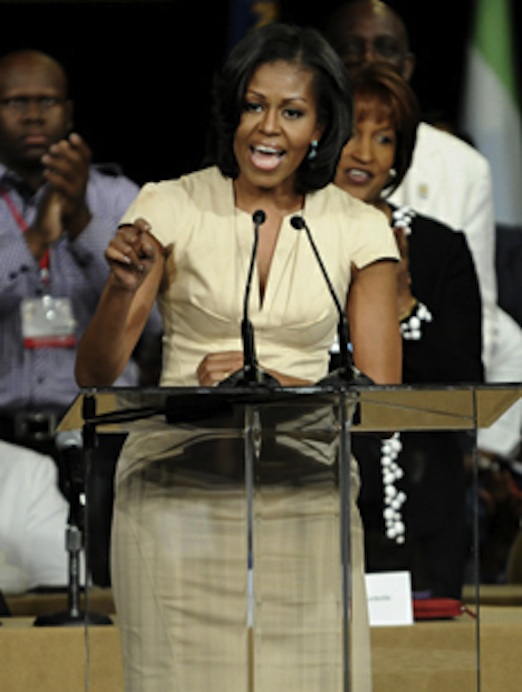 Michelle Obama recently took to the pulpit at the Nashville African Methodist Episcopal Church (AME) 49th General Conference. In an attempt to reignite the same enthusiasm the black community exhibited in 2008 when 96% of that population supported Barack Obama, the first lady was there amongst the faithful preaching a Michelle-style Get Out the Vote homily.

Perhaps sensing a change in her husband’s most ardent supporters, in her sermon Mrs. Obama suggested that many African-Americans are ambivalent about the next election.  The first lady asked the 10,000 supportive conference attendees, “How many of us have asked someone whether they’re going to vote, and they tell us, ‘Nah, I voted last time,’ or ‘Is there really an election going on?'”

Hoping her concern would resonate beyond the conference walls, at one point the first lady sounded as if she was reproving the congregants when she suggested that within the larger black community there was an attitude of ungratefulness. The first lady spoke out against political indifference, saying that “After so many folks sacrificed so much so that we could make our voices heard, so many of us just can’t be bothered.”

Besides hoping to shame voters into action on Election Day, Michelle Obama also made an effort to recruit political activists by urging the flock to move what she called a “precious legacy” forward that has “paved the way for change in this country.”

Mrs. Obama also said, “To anyone who says that church is no place to talk about [political] issues, you tell them there is no place better. Because ultimately,” the first lady continued, “these are not just political issues. They are moral issues.”

Urging the faithful further, Michelle said, “If a simple fisherman could become the rock upon which Christ built His church, surely we can do our part.”

Scripture-quoting aside, it could be that because she and her husband don’t attend church regularly, the first lady is unaware that lately there has been anything but indifference resonating from pastors shepherding many black congregations.  Maybe not in the AME denomination, but in churches all across America black pastors have already been doing just what Mrs. Obama suggested: they are boldly speaking out about political issues, especially those with moral underpinnings.

By and large, on social issues most churchgoing blacks are conservative. And while many have chosen to overlook the abortion issue in order to support Democrat candidates, it seems that Barack Obama “paving the way for change” by coming out in support of gay marriage was not the type of “change” the black community expected.  Moreover, the President’s “evolving” opinion on the issue of same-sex marriage is probably not the “precious legacy” African-Americans had in mind when they voted for him in 2008.

Black conservative congressman Allen West (R-FL), well aware of what Michelle seemed clueless about, referred to the controversy surrounding the President “evolving” when he said “I think it’s going to cause an incredible discussion in the black community, because, as you know, on Sundays in the black community the most conservative people in America are in those black churches.”

From the pulpit of the Shiloh Baptist Church in Washington DC, Reverend Wallace Charles Smith was also vocal about condemning President Obama’s recent announcement in support of same-sex marriage.  When the reverend boldly proclaimed, “The church is against it,” his condemnation was met with resounding shouts of “Amen!” from pews filled with people who almost certainly voted for Barack Obama last time around.

Mrs. Obama even suggesting that black pastors are not addressing moral issues proves that the Obamas’ ties with the black community are superficial at best.  The first lady can talk about change and legacies all she wants, but she couldn’t be more out of touch with the deep-seated convictions that reside within the moral belief system of many black people who attend church.  It’s either that or, like abortion, Michelle and her husband do not consider same-sex marriage a moral issue.

Unaware of the political/moral connection President Obama violated when he came out in support homosexuals marrying, the first lady continued: “But let’s be clear, while we’re tuning out and staying home on Election Day, other folks are tuning in.”

The “tuning out and staying home” mentality the first lady senses may not be ungrateful ambivalence at all, but rather a response to an unexpected situation where the political leanings within the black community that helped ferry Barack Obama into the White House in 2008 have finally been forced to take a back seat to strong moral convictions about the definition of marriage.

Speaking specifically about elected officials, a didactic Mrs. Obama offered the gathering this wonderful advice: “And if you don’t like what you see, then let them know,” which, if the disinterest and lack of enthusiasm the first lady senses is valid, might be a portion of the black community doing just that.

When it comes to the President’s support for gay marriage, the Nashville AME conference that Michelle lectured is likely representative of black churches in general, many of whom don’t like what they’re hearing.  Come Election Day, black pastors and their congregations may very well follow the first lady’s recommendation and let Barack Obama know by “tuning out” and staying home.