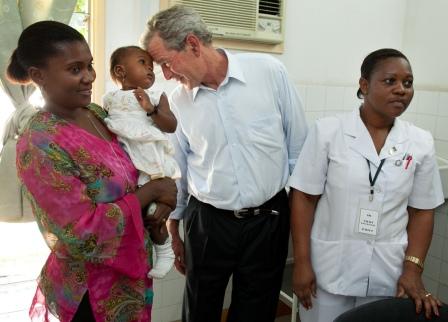 Unable to accept the reality of his own ineptitude, Barack Obama relentlessly calls attention to his predecessor.  For his every policy failure, Obama continues to blame Republicans and specifically everybody’s affable fall guy, George W. Bush.

Yet when it comes to genuine concern for the lives of women and children, the president and a fawning liberal press work in tandem to disguise his tawdry vote-pandering as authentic empathy, and if at all possible avoid calling attention to the humanitarian efforts of former President G.W. Bush.

For example, of late, Obama 2012 campaign co-chair/Latina “brainstorming” actress Eva Longoria is out promoting Barack Obama as God’s gift to womanhood.  Longoria, part-time liberal spokesperson and border security expert, is touring swing states reminding female voters that “President Obama is fighting for us, so let’s go out and fight for him!”

The problem is that Barack Obama’s idea of fighting for women is to insinuate that females are needy creatures requiring lifetime government assistance.  To drive home the point, Obama 2012 dragged out a virtual femme fatale named Julia, a woman apparently incapable of surviving without Obama’s Big Daddy government entitlements.

In fact, the president’s legacy as a protector of women’s health isn’t tied to anything of substance.  Unless of course affiliation with Planned Parenthood and Merck Pharmaceuticals, the largest provider of contraceptives, is what American women consider substantive.

The president’s so-called stunning record of standing for women consists of insisting that health insurance pay for abortion on demand and ensuring that law students have access to free contraceptives.  Barack believes that American Julias should be fighting for him so that he can fight for them by providing the tools necessary for a lifetime of sexual activity and the insurance to deal with any unwanted consequences resulting from those pursuits.

Apparently, Barack Obama believes that championing the cause of women involves hobnobbing for dollars with the likes of actress Sarah Jessica Parker.  Yet while “Desperate Housewives” rally behind a man who believes that women’s health consists mostly of choosing between a birth control pill and a morning-after pill, former President Bush goes relatively unnoticed promoting the George W. Bush Presidential Center’s $3-million women’s health initiative in Africa to “prevent and treat cervical cancer.”

Amazingly, G.W. has managed to save lives and deliver preventative health care to destitute African women — and do it without the assistance of starlets and “Women for Bush” T-shirts.  Instead, the former president silently addresses the genuine needs of impoverished women for reasons other than garnering votes.  Working alongside volunteers in the indigent African nation of Zambia, Bush is renovating a run-down “health clinic, which specializes in the early detection and treatment of cervical cancer.”

According to George W.: “You’re always the former president but I wanted to come here as a laborer. … I do want to say that on this particular trip that myself and friends have left behind a clinic and hope to inspire others to come and refurbish clinics as well.”  George, don’t be looking for Barry to show up anytime soon; on his last visit to his see his poverty-stricken Kenyan family, he “visited two area schools that had been renamed for him” that, despite their namesake, were left shamefully dilapidated.

Barack Obama has made women’s health one of the focal points of his reelection campaign — so much so that he allowed his handlers to orchestrate a media blitz to accompany his phone call to Sandra Fluke to tell her how proud he was of her for going before a congressional committee to demand free contraceptive insurance coverage.  On the other hand, G.W. seems reluctant to call attention to the Zambian effort and says he prefers to “contribute outside the media spotlight,” a concept as foreign to Barack Obama as Zambia is to Chicago.

Referring to having humanitarian labors publicized, former President Bush said, “I hope you don’t see much of it because I don’t want to be in the news. … I believe that quiet service is the best kind of service.”  Bush also said, “I believe freedom is important for peace and I believe one aspect of freedom is people to be free from disease.”

Eva Longoria would probably say that if pro-life George W. Bush was really into freedom, he wouldn’t oppose the freedom to choose, which is why, despite the unacknowledged job of saving the lives of women and rescuing children from the ravages of AIDS, in the minds of liberals, Bush’s efforts do not compare with what pro-choice Obama has done on behalf of a woman’s right to dispose of healthy unborn children.

In the future, if Look at Me Barack feels the urge to call attention to George Bush, the comparison couldn’t be clearer.  Unlike Obama, Bush prefers that his service to the needy go unnoticed.  Conversely, President Obama suffers from an inherent tendency prevalent in liberals to parade around boasting of good works with the ultimate motive of winning personal acclaim.  In reality, Obama’s fight in the supposed war on women is manufactured fiction and funded not with the sweat of his own brow, but off the backs of Americans who’d prefer not being forced by the government to help fund the sexual expenditures of promiscuous coeds.

In the end, as comparisons go, President Bush understands and lives the Scripture that says, “When you give to the needy, do not announce it with trumpets … to be honored by men.”  And so George W. quietly labors in Zambia, exposing Barack Obama’s war on women charade by building a clinic for cervical cancer screening and embracing orphan babies with AIDS whose lives he chose to save instead of abort.