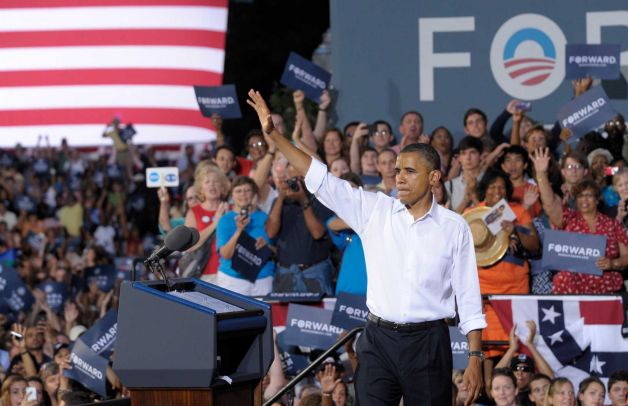 Part of a Blog Symposium at American Thinker.

Campaigning in Roanoke, Virginia, the President of the United States floated a new pitch to garner votes. The theme? All the credit for individual achievement goes to collectivism. Obama tossed a hunk of red meat to the ravenous and received an enthusiastic response when he declared, “If you’ve got a business – you didn’t build that. Somebody else made that happen.”

No longer is Obama attempting to portray successful Americans merely as selfish rich people unwilling to share the fruit of their labor with the less fortunate; his newest approach is to argue that indeed there are those who have done well in America, but that those successes could have only been attained through communal effort.

Instead of choosing to advocate for the two important pillars of liberty, individualism and independence, Barack Obama is now making the toppling of individual achievement part of his campaign stump speech and doing it by tying prosperity to group dependency.

At present, Barack Obama’s influence on America has helped transform it into a place where formerly free people are being denied the “inalienable right” to live as individual entities with individual hopes, dreams or goals.  Neither are Americans any longer free to pursue personal success or happiness without government interference or censure.  And if they do, those successes are now being publicly put down as not really personally achieved.

So, according to Barack Obama, “The point is, is that when we succeed, we succeed because of our individual initiative, but also because we do things together.”  In other words, Barack Obama is of the opinion that the qualities of pluck and fortitude coupled with individual resourcefulness are now insufficient to achieve success.

Using the analogy of a fire department putting out a fire, the President told the cheering crowd full of fainting fans and lifesaving “paralegals” that in order to attain success, teamwork is imperative.  Obama then said, “There are some things, just like fighting fires, we don’t do on our own.  I mean, imagine if everybody had their own fire service.  That would be a hard way to organize fighting fires.”

One wonders whether the fire department analogy is Obama’s standard for success. Because if success is unattainable for a single individual, then Barack Obama is finally admitting he’s an abysmal failure and raises the question of whether the lone cowboy/Executive Orders option he seems so fond of contradicts the teamwork ideology he pushes for everyone else.

Nevertheless, the President haughtily reminded those who might take pride in individual achievement that humility is in order when he told them, “If you were successful, somebody along the line gave you some help. There was a great teacher somewhere in your life.  Somebody helped to create this unbelievable American system that we have that allowed you to thrive.”

Unable to defend his own record, it’s clear that what Obama is attempting to do is to debase the business successes of Mitt Romney.  The President is trying to make the point that without the support of the collective and some government backup for good measure, men like Romney would never have accomplished what conservatives believe is attainable by everyone.

In short, Obama’s clever tactic advocates for collectivism versus individualism, maintains that individual effort is insufficient, and that if by chance a person does manage to surmount government-imposed obstacles and reach the summit of success, Obama is about the business of convincing the public that those achievements would not have been possible had it not been outside assistance.

In essence, Barack Obama is asking individuals to sacrifice the merit of personal achievement to communalism in order to further an ideology to which he is firmly committed, as well as remediate the reputation of those who’ve never exerted commendable effort or achieved anything at all.

Let’s not forget, this is a man who shamelessly took credit for and accepted the proceeds from a best-selling autobiography that may have been written for him by Bill Ayers.  Clearly, Barack Obama had no trouble letting “somebody else” contribute to his literary success, nor does he appear uncomfortable accepting kudos for an effort he never made.  So maybe in the spirit of fairness, the President is just extending the same respect to those eager to find value in being the recipient of government largesse, as he buys votes by painting individualism and personal achievement as something weak, pathetic, and undeserving of disproportionate monetary reimbursement.

And yet, as the President travels the country promoting continued “hope and change,” what he fails to recognize is the dichotomy of begging for money from the successful and then going to Virginia to preach that the people financing his bid for reelection have achieved nothing on their own.

However, do not be deceived – there is a method to Barack Obama’s stump speech madness.  Besides revealing the true nature of his core beliefs, it seems the President is hoping to convince America that the successful couldn’t have had succeeded without the village initiating and sustaining those successes. This way Obama can then justify the use of higher taxes to deliver the fruits of someone else’s labor as recompense for the phantom participation he claims has enabled successful, hardworking Americans to rise above the ordinary and accomplish something to be truly proud of.