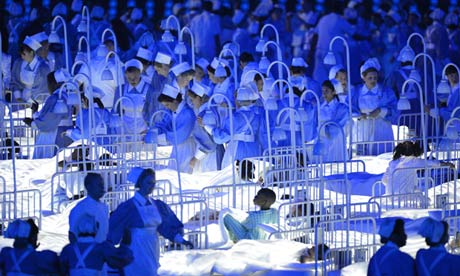 Regardless of futile attempts at liberal do-goodery, the goal on the left is always the same: constantly demanding undeserved praise for well-intentioned but failed acts of benevolent socialism.  That sort of predictable imagery-before-reality mentality was on display during the London 2012 Summer Olympics opening ceremonies, where tribute was paid to the Brits’ failing socialized National Health Service, affectionately known as the NHS.

The producer of the extravaganza, London resident and Oscar-winning director Danny Boyle, decided to integrate a choreographed tribute to the NHS into the showy opening festivities because, according to Boyle, “universal health care is one of the core values of British society” and an “amazing thing to celebrate.”

Sounding as if he was reading off Barack Obama’s teleprompter circa 2015, Danny Boyle also said, “One of the reasons we put the NHS in the show is that everyone is aware of how important the NHS is to everybody in this country. We believe, as a nation, in universal health care. It doesn’t matter how poor you are, how rich you are; you will get treated.”

Besides Slumdog Millionaire and Trainspotting, Boyle directed the movie Shallow Grave — a title more befitting the musical tribute to a health care system renowned for human suffering and premature death.  Bleeding-heart Boyle said this about the NHS: “It is something that is very dear to people’s hearts.”

The NHS may be “dear to people’s hearts,” all right, but probably not to the hearts of those who’ve experienced the horror of a loved one dying after being forced by bureaucrats to wait months for life-saving tests and treatment.

The whole eerie performance with nurses from Great Ormond Street Children’s Hospital (GOSH) dressed in 1950s uniforms pushing around sick children bouncing around on oversized hospital beds was almost as sickening to watch as Barack Obama emerging from the Styrofoam Greek columns at INVESCO Field.

Let’s face it: in general, liberals are so proud of their accomplishments that to market their fantasy, they’d gladly don intricate costumes and push stage props around London’s Olympic Park.  The Brits did it at the Olympic opening ceremonies, and Barack Obama, harbinger of a similarly well-intentioned health care system that is similarly likely to fail, does it symbolically every time he promises the same type of medical quality and access that the NHS has proven for over 60 years is impossible to physically or financially maintain.

In an October 13, 2011 Mail Online article entitled “People are dying from lack of care. The NHS must be held to account,” “realist” Julia Manning, chief executive of 2020Health, wrote, “Of course we have much to be proud of in the NHS, but complacency and sentimentality have no place in an NHS in which people are dying for lack of care.”  Julia, how about dancing Florence Nightingales?  Do they have a place?

The truth is that while the NHS was sentimentally praising itself in front of the world, what the organization failed to mention was the minor detail that GOSH was the place where a 13-year-old boy named Arvind Jain died of malnutrition after waiting eight months for a complacent health care system to schedule a routine 30-minute procedure to insert a feeding tube into his stomach.  After the boy’s death, the NHS Health Service parliamentary ombudsman deemed that Arvind was “left to die in agony after ‘chaotic and substandard’ car[e].”

Meanwhile, while those 600 real-life nurses were celebrating shoddy health care at the London Olympics opening ceremony, in “free” hospitals all over Britain, patients both young and old might well have been dying of dehydration.

Back in 2001, in an article entitled “Why the NHS is bad for us,” Anthony Brown, former health editor of the U.K. Sunday publication the Observer and former “passionate believer in the NHS,” said of the National Health Service, “[I]t can never work and is only kept alive by wrong-headed idealism.”  Anthony Brown’s article brought to light many disturbing facts, one of which was the plight of elderly patients, some of whom, after lying for days on “trolleys” in NHS emergency wards, died needlessly.

Brown aptly summed up the liberal disease of “wrong-headed idealism,” which is a romantic philosophy that apparently disregards death while promoting systems that fail merely because, in the mind of a liberal, good intentions equal success.

Brown lamented that British citizens “die and suffer unnecessarily for different reasons, but there is just one root cause: the blind faith the Government has in the ideology of the National Health Service, and our unwillingness to accept not just that it doesn’t work, but that it can never work.”  And meanwhile, Danny Boyle is “celebrating.”

NHS detractors agree that although socialist-style health care may have laudable objectives, those objectives do not compensate for the appalling results.  In 2009, it was reported that approximately 300 patients died each year of malnutrition in British hospital wards.  The truth is that if the NHS wanted to commemorate an achievement, it should have been touting being the best at providing some of the worst health care on the planet.

Whether those merry dancing nurses realized it or not, they were representing a bankrupt system that relegates the very ill to waiting lists and denies drugs that are already paid for with the tax money of poor British citizens.  What the nurses promoted was a system that has been known to refuse patients basic human needs like food and water, forces the sick to wait until it’s too late for life-saving treatment, and effectively euthanizes 130,000 elderly people a year.  Nonetheless, based on what the world witnessed at the Olympics opening ceremonies, the NHS accomplishes all those atrocities with a rollicking sense of national pride.

Like communism, socialism, Marxism, and the newest edition to the lineup, Obamanism, the British health care system obviously perceives itself as well-intentioned, which liberals worldwide obviously translate into ample justification for playing God with other people’s lives.