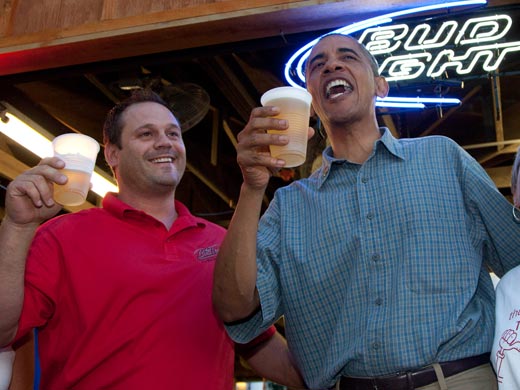 Having to pass up that fried Twinkie didn’t stop Barack Obama from banging back a Budweiser at the state fair in Des Moines, Iowa.  The President chose to grace third-generation beer stand owner Mike Cunningham II’s popular Bud Tent with his exalted presence, a decision that caused the establishment to be closed down during the most profitable time of the day.

After Barack’s beer stop, Iowa Senator Chuck Grassley signaled that the President’s visit wasn’t appreciated by the beer stand owner when he tweeted the following: “How does PresO justify havin secret service shut down the bud tent @ the state fair nd the owner told me he loses 50,000 n 1 nite?”

According to Mike Cunningham, a more accurate figure for the cost of the President’s little photo op to his beer business is about $25,000 in lost revenue, because when Obama arrived, for security reasons the beer tent was forced to close to the public right around the time arena-rock group Hairball was scheduled to appear in the amphitheater next door.

Republican Cunningham, who was probably wishing Barack and his bus tour had had a hankering for corn dogs instead of beer, felt that by losing all that income he had been “put in a position to make a campaign donation against [his] will.”

Nonetheless, while beer-loving Barack was there, Cunningham, ever the gentleman, managed to mask his lack of appreciation for the President’s disruptive pit stop.  The Bud Tent proprietor­ “smiled, posed for photos [and] raised a beer with Obama.”  He even gifted the President with a ‘Save Water; Drink Beer’ T-shirt, which is the perfect outfit for Obama to wear while he’s riding around in a campaign bus that’s allegedly well-stocked with cold White House-brewed beer.

In the meantime, while bellying up to the Bud Light booth the President, a man always concerned for small business, made a pitch to assist the local beer industry by saying, “Hey everyone who’s over 21, you gotta buy a beer!”

The crowd that was “screened and scanned by the Secret Service and penned in by yellow caution tape” must have taken it for granted that Obama would be just as generous with his own money as he is with everyone else’s, because they started chanting “Four more beers…four more beers!” Obama, paving the way for a “new America where prosperity is shared,” calmed the rowdy crowd, saying “Let me see what’s in my wallet.”

Imagine that! America’s “Ground Force One” bus-tour President, a man who couldn’t care less if Americans are strapped for cash when they’re forced to pick up his tab, had to check the status of his wallet contents.

As the thirsty crowd continued to cheer “Four more beers!” the President yielded and in a fair-minded and nondiscriminatory manner said, “I’ll tell you what, except for [the guy with the] Romney sign, I’ll buy beers for ten people.”

What a good sport he is, that Barack Obama! Over a Budweiser, at a state fair, while campaigning for votes, the guy with the beer foam moustache demonstrated that his idea of “sharing the wealth” favors only those who support his bid for reelection.  He also made it clear that if you happen to own a small business and on a whim he feels like barging in for a beer and it ends up costing you $25,000 in profits — tough luck.

So there it is — in the hot Iowa sun, thin-skinned brewski-loving Barack Obama had himself a frosty cold one with a select few and got to diss a Romney supporter exercising his First Amendment rights. Good times.  The historic visit also confirmed for Bud Tent owner Mike Cunningham — who said “I wouldn’t have voted for (Obama) before, and I won’t again” –why it is he feels the way he does.