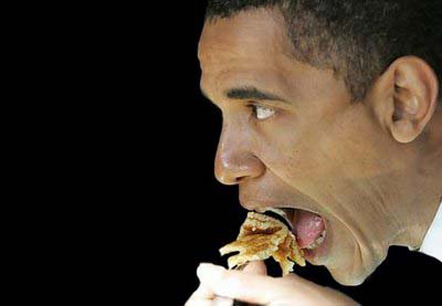 For the last four years, food has taken center stage in the Obama administration.  What to eat, what not to eat, what Michelle is eating, what Barack is eating, what Michelle thinks Barack should and should not be eating.  The nation has been introduced to locally-grown organic kale, Kretchmar’s Bakery, dog-dogs, shaved ice, Wagyu beef, Ray’s Hell Burgers, and 1,500-calorie ancho chili short ribs.

Whenever they’re on the road, the Obamas make it a habit to ask their 30-vehicle entourage to veer off-course to stop for fresh baked pies and homemade chocolates.  Campaign buses have come to a screeching halt for pork chops, beer, hamburgers, Happy Hour, and Skyline Chili. Suffice it to say that for the last four years, every step along the way, food has been a faithful companion to the perpetually hungry Mr. and Mrs. Obama.

That was until Barack Obama, in Roanoke, Virginia, expressed his lack of appreciation for all the hardworking small businesses he frequents when he said:

If you’ve been successful you didn’t get there on your own… I’m always struck by people who think, ‘Well it must be because I was just so smart.’  There are a lot of smart people out there. ‘It must be because I worked harder than everybody else.’  Let me tell ya something, there are a whole bunch of hard-working people out there.  If you were successful, somebody along the line gave you some help…  If you’ve got a business, you didn’t build that, somebody else made that happen.

Lately, insulted by Obama’s attitude, many food establishments that would have normally embraced a visit from the President are more apt to flip over the sign that says “Open for Business” to “Sorry, We’re Closed.”

For example, if he’s in Cincinnati, Ohio Barack Obama had best not stop at Krause’s German Deli for dumplings and cabbage.  Seems the owner, Debra Krause-McDonnell, is “a little angry” over having her deli show up in an Obama campaign ad without her permission. Krause-McDonnell felt the stock footage purchased from a local video company put her “into a position [she] didn’t ask for.” Losing business because local customers think she’s a Barack Obama supporter and not wanting her deli to be a “political prop for either side,” Debra is contemplating legal action.

As for sweet treats, who can forget the first lady declaring, “Someone is going to have to give up a piece of their pie so that someone else can have more?”

With that in mind, if the “food stamp President” should pass through the blue state of Massachusetts for a fundraiser, staging a photo op at Braintree Farmer’s Market in Walpole might not be a wise idea. Why? Because a baker who occupies one of the booths there is refusing to let customers purchase Whoopee Pies with EBT cards.

It’s likely that Barack Obama, who, like his wife, believes in sharing pie, would beg to differ with Andrea Taber, owner of the Ever So Humble Pie Co. Unlike Michelle Obama, Andrea believes “American taxpayers should [not] be footing the bill for people’s pie purchases.” If she has to, rather than “sacrifice [her] principles and standards for the sake of a few more sales,” Ms. Taber is prepared to pack up her stall.

Which brings us to the Iowa state fair, where Barack Obama dropped in on one Mike Cunningham II for an afternoon brew.  Using beer as part of his pandering technique, Obama bought a round for 10 supporters, leaving out one fella’ carrying a Romney sign.  The Obama visit cost the Republican Bud Tent owner about $25,000 in lost revenue. Less than thrilled and echoing Debra Krause-McDonnell’s sentiments, Mike said he felt the President had “put [him] in a position to make a campaign donation against [his] will.”

Mike Cunningham’s bold admission that the President’s visit to the Bud Tent at peak hours was something he did not appreciate has emboldened other food establishments to express their true feelings about Barack Obama’s anti-business sentiments.

Dressed in a pro-Romney T-shirt that said, “Government didn’t build my business, I did.” Ross Murty, co-owner of the Village Corner Deli in Davenport, Iowa was hired to cater an event for the Obama campaign. Murty’s message to the President: “No one from the government was there when we were sweating it, when we were building this business.”

Thus, moving from bratwurst to Budweiser, beef brisket to Whoopee Pie, in Virginia the controversy reached a gastronomical crescendo when Crumb and Get It Cookie Company owner Chris McMurray refused to serve cookies to Joe “Ya’ll” Biden.

Openly admitting he disagrees with the Obama administration’s policies, having only been in business for three months, much like the Whoopee Pie maker of Walpole McMurray was willing to forfeit new business to stand by his principles.

After respectfully declining the “opportunity of a lifetime,” McMurray said he’s “hoping folks will understand [I] just didn’t want to be part of a photo op for an administration whose policies [I don’t] agree with.”

Not used to witnessing genuine conviction, “shortly after Crumb and Get It told Biden’s advance people ‘no’ – the Secret Service [allegedly] walked in and told Chris McMurray ‘Thanks for standing up and saying ‘no’ — then they bought a whole bunch of cookies and cupcakes.”  That claim was later denied by a spokesperson for the Secret Service.

Nevertheless, Virginia locals seemed appreciative of Chris’s rejection and “rewarded McMurray with a rush of business.” The fledgling bakery built by Chris and his hardworking wife had an unprecedented boon in business and ran out of baked goods by midday.

In the meantime, Obama is clocking the miles on “Ground Force One,” passing signs along the way like the one in Georgia and Broken Arrow, Oklahoma that says: “We built this business without gov’t help. Obama can kiss our as*es. I’m Bob Roggendorff and I approve this message.” And so, like a pile of French fries and fat cakes on Michelle Obama’s plate, it appears the list of small-business eateries eager to have the President drop in for a snack grows smaller by the day.