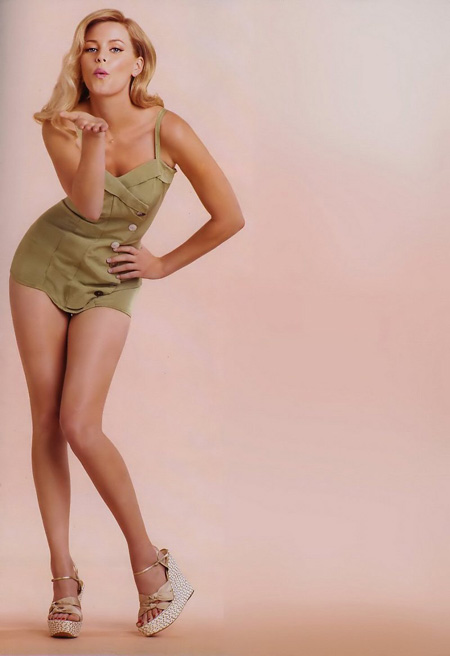 While Elizabeth Banks’ opinion is inconsequential in terms of the big picture, it’s important to expose the ignorance and farcical rationale displayed by an ever-growing roster of Hollywood shills for Obama. These out-of-touch, overpaid show-business types have made it their business to influence the ill-informed so that Obama can continue inflicting his economic and social reign of terror on the nation.

Too bad the ad’s not an interview, because it would be interesting to hear Elizabeth explain why she thinks a woman who chooses not to avail herself of Planned Parenthood’s services would have to discuss her menses with her employer.

Nevertheless, an even more striking thing about the ad: Since when did Elizabeth Banks become so reserved about her sexuality?  Maybe she doesn’t realize it, but thanks to her appearance in an Obama/Biden 2012 ad, the whole country now knows about her menstrual flow.  Moreover, isn’t this the same woman whose career was built on sex scenes, the most famous of which is in The 40 Year Old Virgin, where Banks’ bookstore clerk character “masturbates with a shower nozzle?”

In the Obama/Biden/Planned Parenthood ad, Banks continues by saying that because she doesn’t want to talk to her boss about female-related issues, she’s “really happy” Planned Parenthood exists to “provide essential services all over this country.”

Looking and sounding a bit uncomfortable, Banks then shares statistical information with the audience, claiming that “the services that they provide, ahhhh, what is it, 95% of them don’t involve anything controversial.”

Elizabeth’s Judeo-Christian/Irish Catholic/Protestant/conversion-to-Judaism roots could be the reason the actress chose not to utter the word “abortion,” and instead inserted the word “controversial.”

That 5% figure, although 3% is the number Planned Parenthood uses, has to be wrong, and a little basic math would prove it.

Planned Parenthood confesses to approximately 300,000+ abortions per year, give or take a child’s life here and there.  In 2010 the organization admitted to dispensing about 1.4 million morning-after pills, which makes it 1.7 million ‘abortion related’ services in 2010.  And Planned Parenthood expects America to believe that 1.2 million minus 300,000 means that 900,000 additional abortions are being performed elsewhere in some little corner butcher shop somewhere?

Moreover, shame on Ms. Banks, who has herself admitted to struggling with infertility, for nonchalantly dismissing the lives of innocent children destroyed largely for the sake of convenience.

Referring to Mitt Romney, the actress asks the question: “What is he doing? He’s going to take away people’s access to healthcare close by?”  Sure, in the overall scheme of things, proximity does take precedence over the slaughter of 300,000 defenseless babies, which amounts to 19 coliseums each filled with 16,000 spectators being destroyed per year.

Come on Elizabeth, even the most ardent Planned Parenthood advocate knows that healthcare is not the first thing that comes to mind when the name Planned Parenthood is mentioned.  As for the communities that can’t get by without a clinic on the corner, the late eugenicist Margaret Sanger would likely concur that this is especially true for lower income neighborhoods, where Planned Parenthood clinics are located to assist minority women in relieving themselves and society of the burden of unwanted children.

According to Ms. Banks, the reason President Obama – a man who has destroyed the economy, trampled our Constitution, and continues to infringe on the rights of American taxpayers opposed to abortion – deserves to stay in office is because he “has not compromised” on the rights of women who’d rather abort their children and avoid discussing their “heavy flow” with an employer.