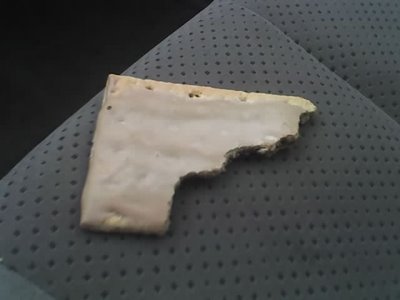 A few months ago, a five-year-old Pennsylvania girl was standing at a bus stop talking to her friend when she made the mistake of insisting a princess bubble blower is superior to a Hello Kitty Bubble gun.  The little girl suggested to her bus mate, “I’ll shoot you, you shoot me and we’ll all play together.”  That conversation resulted in the kindergartener that made the suggestion being reprimanded in the principal’s office, suspended for 10 days for making a “terrorist threat,” and mandated into a series of counseling sessions with a therapist.

Now we come to find out that a seven-year-old aspiring artist from Baltimore, Maryland, Josh Welch, is in need of some serious Pop-Tart-eating redirection.  Seems Josh, who suffers from ADHD, was being creative with what was at hand and tried to sculpt his strawberry breakfast Pop-Tart “into a mountain” with his teeth.  Josh’s venture into carving territory is what got him a two-day suspension from Park Elementary School, because from his teacher’s perspective the Pop-Tart resembled a gun.

Josh said, “It was already a rectangle and I just kept on biting it and biting it and tore off the top and it kinda looked like a gun but it wasn’t.” Young Josh explained, “All I was trying to do was turn it into a mountain but, it didn’t look like a mountain really and it turned out to be a gun kinda.”  In due time, Josh will find out that it’s all in the turning-while-biting action, which takes practice.

Josh learned the hard way that art can be like that. A burgeoning artiste starts out wanting to nibble a mountain into existence and suddenly, with a badly planned bite here or there, what started out as a peaceful depiction of nature suddenly turns into a strawberry-filled weapon.  Fortunately, Josh wasn’t attempting to fashion a ‘7’ or an ‘L’ out of the Pop-Tart, because those two shapes look too much like a gun and could not have been as easily explained away as a Pop-Tart mountain.

One thing is for certain: while Josh may not be all that good at sculpting mountains out of Pop-Tarts, he sure is spot-on when it comes to discerning the mood of his teacher, because both he and his Pop-Tart were suspended from school for two days.

Think of it – poor Josh was just eating his breakfast when he was suddenly overwhelmed with a burst of spontaneous artistic inspiration. Then, midway through the effort, for some reason Josh looked up after chewing away half of his breakfast pastry and his eyes met his teacher’s.  Josh said that his first thought at that point was: “She was pretty mad…and I think I was in big trouble.”  The rattled educator, looking out for the wellbeing of her other charges, said she ‘thought’ she overheard Welch saying, “bang bang” while holding the repurposed Pop-Tart.

The tart was confiscated and Josh was promptly extricated from school premises.  To quell any hysteria, a letter was sent home to concerned parents explaining the unsettling Pop-Tart incident.  The letter explained that it all started when the teacher thought she saw Josh shaping his Pop-Tart into a gun, and ended when she determined that the second-grader “[u]sed food to make an inappropriate gesture.”

After collecting his son, Josh’s dad said he was surprised the school chose such a severe sentence, especially because no one was hurt by the Pop-Tart.  It’s not like little Josh bludgeoned a classmate with a half-eaten slice of pizza he chewed into a hatchet, or tried to drown some kid in a puddle of low-fat milk, or even threatened to shoot a friend with a princess bubble blower.

After the big to-do, Mr. Welch the younger said he wanted only to return to school, and joked that thanks to the mountain/pistol incident, “I didn’t get to eat all my breakfast, so, really I am still hungry.”  Hopefully, after all this trouble Josh has learned not to use baby carrots for bullets, spaghetti as a whip, or pretzel sticks for swords and stick to just using condoms for water balloons.

Josh Welch’s father said of suspending a seven-year-old for brandishing a Pop-Tart, “I would almost call it insanity.” Almost insanity?  Not calling it insanity would be insanity. Mr. Welch rightly pointed out, “I mean with all the potential issues that could be dealt with at school, real threats, bullies, whatever the real issue is, it’s a pastry…Ya know?”  Yeah, we know.