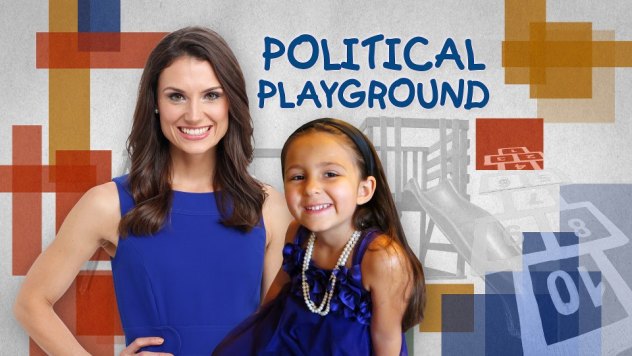 A leading question is one posed in such a way that it extracts from the person being questioned the answer the interviewer desires. In the mid-1980s and early 1990s, there was an explosion of child sex abuse cases. Debbie Nathan, author of Satan’s Silence: Ritual Abuse and the Making of a Modern American Witchhunt, believes that in some cases it was “quite possible [that] untrained or overzealous investigators… tease[d] false allegations from children.”

Small children, who are more susceptible to leading questions, sometimes think being interviewed is a game. So, rather than offering answers that reflect their true feelings, oftentimes children respond with replies they believe grownups want to hear.

An example of an adult teasing out a desired response from a child was displayed when the liberal host of MSNBC’s The Cycle, Krystal ‘Screw’ Ball, showed up on the “Political Playground” with her daughter Ella in tow.

Besides being a Democrat strategist, Krystal is known for an unsuccessful run for Congress in the state of Virginia in 2010 and for some photographs depicting her mouthing a large red sex toy that a man dressed up like Rudolph the Red-Nosed Reindeer had taped to his nose. An avid proponent of abortion, Krystal Ball also stirred controversy when she referred to pre-abortion trans-vaginal ultrasound as “mandatory state probing” and “state rape.”

Five-year-old Ella is the first of Ball’s children to survive the womb. Due to be born this summer is a second possible survivor rumored to be a son.

Ball has paraded Ella on “Political Playground” before. On those segments, Krystal goaded her daughter into praising Barack Obama and lamenting Mitt Romney for threatening to ax Big Bird.

Krystal recently hosted the adorable Ella again. This time, Mom proceeded to masterfully extract from the little girl the answer she needed to reinforce a pro-gay marriage stance. In response to Krystal’s successful endeavor, the question is this: Is Ms. Ball’s point that if a child says it, it must be true — or that grownups who don’t think like kindergarteners should be ashamed of themselves?

In a liberal’s mind that may be how they see things, but in the mind of a sane person it’s clear that children have vivid imaginations, a natural propensity to tell lies and exaggerate, and above all a tendency to parrot what they hear parents saying.

Nonetheless, just short of dangling a lollipop in front of Ella, Krystal Ball began the manipulative segment by asking the little girl, “What is marriage?” Ella, who later in the interview confidently expounded upon New York state marriage law, initially seemed unable to answer the question. Eventually, Mom coached Ella to say that marriage means people live together. At one point, little Ball clarified that people marry people, not cars or trees (at least not yet).

Krystal probed further with the ‘marry a person’ question, asking, “A person… what kind of person?” Ella, exhibiting traces of latent homophobic tendencies, with unabashed gender specificity, said, “Like a wife or a husband.” Krystal then asked, “What makes a person decide that they want to get married?” Ella replied uncertainly, “They get in love with each other?”

Sounding like an interviewer at a bogus daycare sexual abuse trial, Ms. Ball revealed her extreme values when she asked her daughter, “What if you were in love with a girl, could you marry a girl?” Much to her mother’s delight, Ella said that if she chose to marry a girl, and not a little boy named Eli, she could only do so in New York.

Fidgety Ella explained: “Yes, because girls can marry girls and boys can marry boys in New York.” Then, appearing to be a little awkward, the tyke explained that sometimes the extraordinary does happen in New York — a girl actually marries a boy.

Ball quickly reacted with, “And that’s good because you want people to marry who they’re in love with, right?” Ella, the girl who couldn’t explain marriage two minutes before, responded “Yeah!” Take that, you loveless homophobes! It’s all about love!

No it’s not! In an effort to cheaply bolster the same-sex marriage argument, it’s about exploiting a child’s suggestibility and eagerness to please, and doing so is as despicable as cajoling stories of sexual abuse from impressionable children that say exactly what overzealous investigators want to hear.

And the provocation didn’t stop there — lesbian marriage promoter Krystal Ball continued to corrupt little Ella by posing yet another leading question: “How come in other places a girl can’t marry a girl… that seems strange, right?”

No, ‘Screw’ Ball, that’s not strange. What’s strange is a political hack using her kindergarten-aged daughter to communicate the message that disagreeing with same-sex marriage is “strange.” What’s next — a pro-choice segment where a pregnant Krystal Ball explains to a terrified Ella that before she was born she could have killed her, but chose not to?

The “Political Playground” conversation ended with the pundit telling the child that “Some other places haven’t decided yet that you should be able to if you’re a girl marry another girl.” Ball then asked, “They should change that shouldn’t they?” to which the always agreeable Ella replied, “Yeah! That’s crazy.”

Driving home the point, Krazy Krystal must have needed to hear the youngster say it again, so she prompted Ella with another, “It’s crazy, because people should be able to marry who they love… Riiiight?”

Wrong! Plumbing the depths of a new liberal low, Krystal Ball exploiting her child to express her own view on homosexual marriage definitely takes the same-sex wedding cake. Then again, this shouldn’t be a surprise coming from a rabid liberal who would have flushed a pre-born Ella if it had benefited her somehow. Instead, Krystal chose to let Ella live so that one day, on a cable news show, Ball could wheedle ‘who you love’ talk out of a five-year-old before leading her to spout off about the crazy strangeness of anyone who opposes gay marriage.