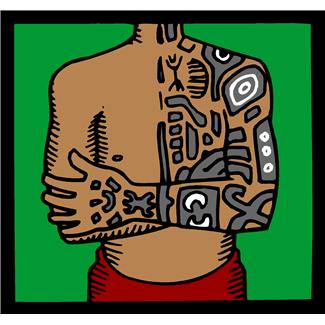 Liberals are amazingly hypocritical. Take Barack Obama, please…I mean, for example. This is the man who publicly declared that he supports abortion because if one of his 14- and 11-year-old daughters “made a mistake,” he wouldn’t want them “punished with a baby.” Yet, when it comes to getting a tattoo, the president told NBC’s Today show that both he and Michelle really discourage Sasha and Malia from doing so. That’s surprising not because the president disapproves of permanent skin art, but because one would think Obama would like to have his wife and daughters emblazon his historic visage somewhere on their person.

Guess that isn’t the case, because the president and first lady warned the two girls that while abortions are more than acceptable, tattoos are not. Obama threatened Sasha and Malia by telling them that if they ever decide to get a “tattoo then “mommy and me” will get the same tattoo in the same place on their bodies and show it off on YouTube as a “family tattoo”.” Please note: the president did not include Grandma Marion Robinson in that particular ‘”family tattoo” threat.

With or without Grandma being in on the tattoo action, it’s clear that the president is convinced that millions would breathlessly tune into YouTube to catch a gander of the Obama family tattoo. And while it’s improbable that a close-up of Obama’s tattoo would go viral, what’s highly probable is that Barack has not thought this tattoo thing all the way through.

Take for instance a scenario where Sasha and Malia are fans of Rihanna and want a reproduction of her “under boob” tattoo. Although some think their father is a boob, in that particular case, unless there’s something we don’t know, he couldn’t be the fourth party to that particular YouTube posting. Moreover, based on his non-affinity for Jesus – on or off the cross – matching crucifixes, or worse yet, a red, white, and blue GOP elephant tattoo, might cause Obama to renege on the warning.

Jokes about tattoos aside, for those who abhor both abortion and voluntary bodily desecration, if given a choice between destroying human life, putting a ring through an ear lobe, or adorning a shoulder with a Celtic cross, permanent ink and body piercing wins out. The real issue here is not whether Barack Obama approves of his daughters getting tattoos or not, it’s about abortion advocates balking at tattoos and pierced ears on their own children while promoting, funding, and arguing on behalf of abortions on ours.

This type of absurd emphasis on forbidding the relatively innocuous for their children while promoting the life-threatening for ours is not exclusive to Mr. Obama. NARAL 100-percenter Hillary Clinton voted “No” on “prohibiting minors crossing state lines for abortion,” and then wouldn’t give Chelsea permission to pierce her ears for her 13th birthday. In other words, if somebody else’s 13-year-old daughter wanted an abortion, Hillary supported allowing a doctor to probe a girl with saline, suction, or a scalpel without parental knowledge. But, if someone had dared to put a piercing gun near Chelsea’s ear at age 13 there would have been hill, I mean hell, to pay.

If Barack Obama and his liberal cohorts refuse to let their own daughters get tattooed or pierced, maybe they should keep their right-to-choose paws off of our daughters.

Furthermore, the president should just forget about embarrassing Sasha and Malia with some phantom “family tattoo” YouTube video threat. Instead, if he really wants to mortify Sasha and Malia, he should show them the clip of himself cynically using them as an example in that famous “punished with a baby” statement he made in 2008 in Johnstown, Pennsylvania.